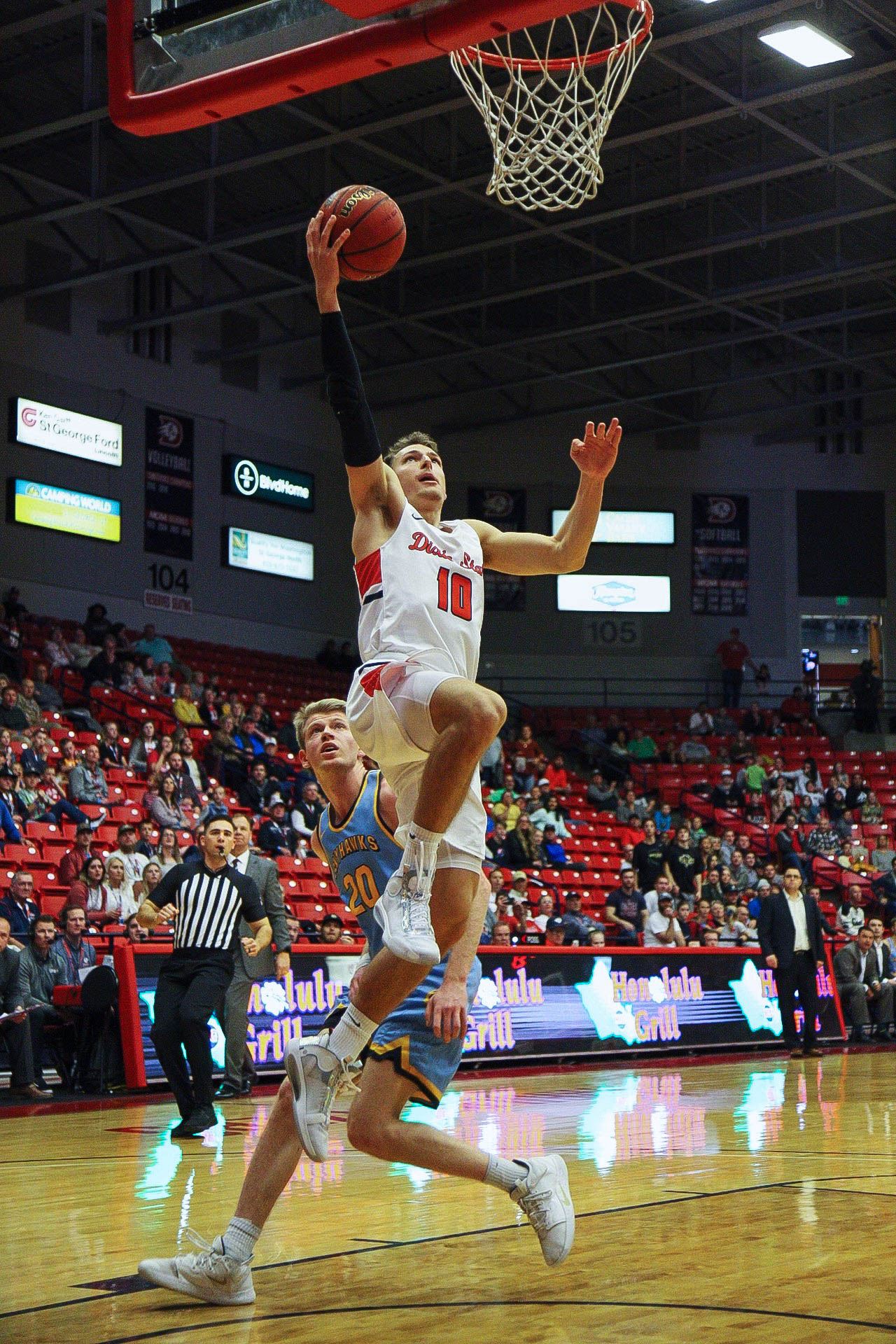 Jack Pagenkopf, a senior business administration major from Brooklyn, New York, scored a career-high 27 points, rounding out the night with an all-time assist in the season. The energy was flat for the first half of the game while the Trailblazers misfired on nine of their first 14 shots over the first nine-plus minutes.

The game was a constant battle for who was in the lead. At the half, the Trailblazers trailed by a seven-point deficit, the first time DSU has trailed at the halftime break this season.

The second half started off with a much faster pace with DSU outscoring FLC 11-4 over the first three-plus minutes to make an even score of 38-38. Fort Lewis broke the tie on its next trip down the court, but Pagenkopf scored a 3-pointer on DSU’s following possession giving the Trailblazers their first lead of the night at 41-40. DSU would extend the lead to as many as six points at 49-43.

The game was cutting close as the Skyhawks drew even at 68-68 with 52 seconds left in the game. The Trailblazers were able to take possession and keep the lead ending the night in a 73-69 win for the Trailblazers.

The lull in the team’s energy was palpable as head coach Jon Judkins said.

Judkins said, “I don’t know if it was senior night that caused that problem; I had guys start that I don’t normally have start and that’s exactly something we talked about at halftime.”

Pagenkopf said the energy was down the first half because senior night hadn’t given them the extra time to warm up properly. He said the team wanted to pick up their energy the second half and improve on things that were challenging in the beginning.

Pagenkopf said, “Defense, working on that at the beginning was pretty bad.”

He said the team has been amazing and there have never been dull moments, even when they have three-hour long practices.

Cameron Chatwin, a senior recreation and sports management major from Mesa, Arizona, said the team gets on one another, but that it’s out of love because everyone knows how capable they are of playing their best.

Chatwin said his mindset for the game was going for the win. The team has to win every game from here on out just to be able to win the championship with the conference.

“[Being on the team] has changed my life,” Chatwin said.

He said the team is able to thrive off of each other from the relationships it builds, allowing for them to have stronger game play.

Judkins said the hardest part of the year is senior night because it’s hard to let them go. He said he’s seen the seniors on the team grow up and mature before his eyes and bring the strong sense of senior leadership to the team he hopes freshman Frank Staine will also pick up. Judkins said the seniors took leadership last night and told the team that even though it’s senior night, the team still has a lot left to do.