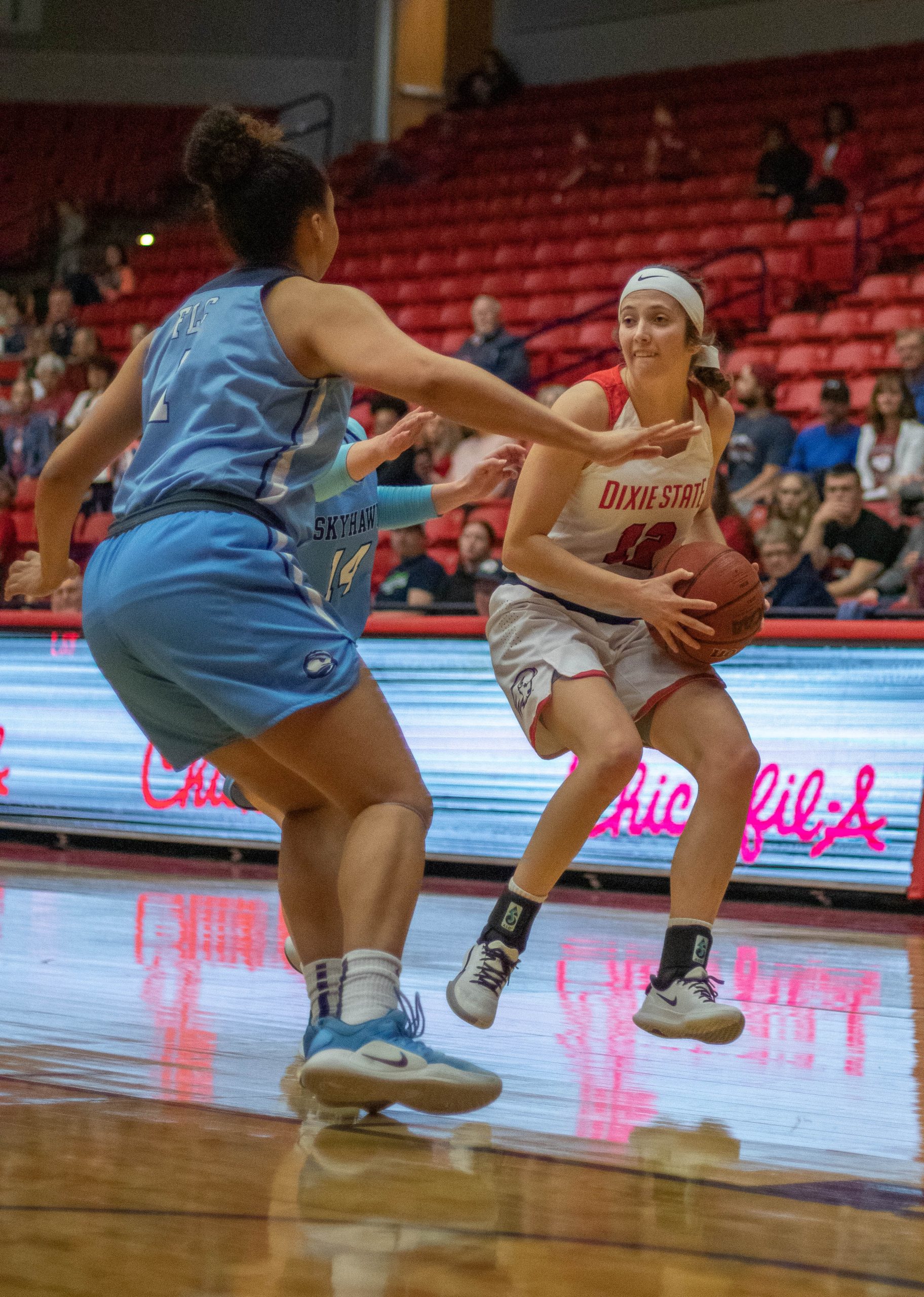 Madi Loftus, a senior individualized studies major from South Jordan, Utah played her final home season game on Feb. 15 against Fort Lewis College. Madi sets up for a two pointer but gets stopped by the opposing team. Photo by Breanna Biorato.

After the team’s 59-53 victory over Adams State University on Feb. 14, the team rallied together yet again for senior night on Feb. 15. The Trailblazers defeated FLC 66-59. The win against FLC has been the first since DSU’s first season as an NCAA Division II member.

While the game against FLC was fast-paced, head coach JD Gustin said the night before had a lull of energy and lackluster performance.

“I appreciate the fact that our kids brought more energy, but they should in a senior night situation like this where there’s lots of emotion it’s easier to get more energetic,” Gustin said.

Stevenson scored a team-high of 19 points, while Pavlica added 13 points and six rebounds. Franks finished the night with 11 points and Breaunna Gillen added a career-high 10 points and three rebounds.

Chesney Stevens, a senior exercise science major from Panguitch, said her plan going into the game against FLC was to work hard and not foul. She said the energy from the crowd helped to fuel her emotions.

Stevens said, “Playing at home and having the crowd and the support behind you is very emotional and I think having those emotions going into the game helps.”

Stevens said it’s hard to pick out one specific high point of the season, but overall the team chemistry clicked throughout the season making them a stronger team.

Madi Loftus, a senior individualized study major from South Jordan, said she wanted to have fun going into the game and knew the energy she needed to bring. Loftus said there was a lot of emotion and the team just wanted to have fun and enjoy it.

“It [means] a lot,” Loftus said. “It’s everything you’ve worked towards for two years and it felt like one big celebration.”

Loftus said the team is the best of friends off the court, so when it comes time for games they’re able to work together to get the job done. She said she took her coach’s advice to never give up and keep working hard even if a call or play didn’t go her way.

“There’s nothing like it; they’re my best friends,” Loftus said.

“This has by far been my favorite team,” Stevenson said. “I’ve loved every single one of them and it’s so hard to leave them; I’m lost without them.”

Gustin said he’s been blessed to have coached such wonderful young women.

The Trailblazers will travel to Denver, Colorado, next week to take on Regis on Feb. 21 and Colorado Christian on Feb. 22.