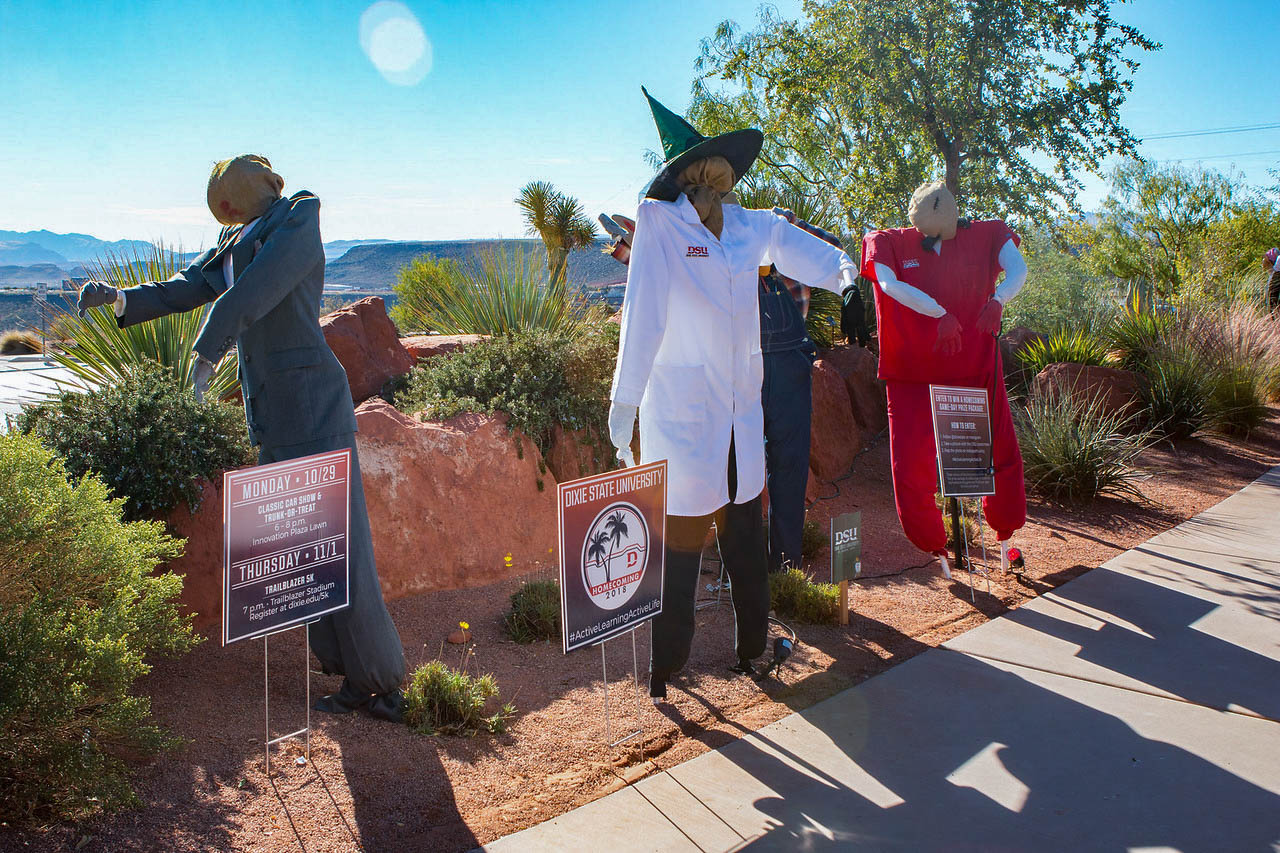 DSU hosts halloween activities with the community. With the new upcoming Dixie Giving Day, DSU can continue to expand the existing groups on campus by the donations it receives. Photo courtesy of UMAC.

Dixie State University is joining in on the national day of giving by starting its own Dixie Giving Day on March 10 to increase engagement, help recruitment and spread the name of DSU.

Giving Tuesday is a national day in December that nonprofit organizations participate in to encourage people to do good, according to givingtuesday.org.

Other universities have started their own giving days throughout the year, which is why the DSU development office decided to assemble its own, said Donor Relations Coordinator Sarah Bagdoian.

“You can always give to [DSU] and you can always choose specific scholarships, but this is really an involvement campaign,” Development Officer Brooks Burr said. “We’re trying to really just reach and touch a lot of different stakeholders here and let them know where we’re at.”

The end goal is to increase the community and campus engagement, Burr said.

The four categories available for donation include Division I athletics, general scholarships, the Alumni Legacy Campaign and the area of greatest priority or need.

Transitioning to Division I athletics is an expensive process, Burr said.

“We need help from the community, alumni, donors [and] anybody who can help us get there,” Burr said.

Burr said the university wants to support the scholarship fund because it can help students exponentially.

“It’s really important that we retain our students and one of the biggest barriers they can face is financial, so scholarships [are] going to be an important part of this,” Burr said.

The Alumni Legacy Campaign is a program created to enhance the lives of DSU alumni and their families, according to the university’s website.

The campaign offers scholarship opportunities to children and grandchildren of alumni, Burr said.

Area of greatest Priority or Need:

Money donated to this category will go toward anything President Richard “Biff” Williams deems a priority.

Burr said his goal is for people to get in the habit of looking for this day every year and to want to give back.

Burr said he is pushing for 250 donations but does not have a goal for a dollar amount.

“[It’s an] opportunity to come together, show our pride and show how much we love our school,” Bagdoian said.

Tayloranne Johnson, a sophomore communication studies major from West Jordan, said not only will Dixie Giving Day involve the community with the university, but it will also demonstrate the growth of DSU.

“I think people will see that [DSU] is not that small two-year college anymore – we’re a university that is coming under all the other Division I schools, and that we’re making a big statement,” Johnson said.

Bagdoian said the development office wants to build on this campaign year after year.

“We’re hoping that this will snowball, gain momentum and that people will send this out through their own social media,” Bagdoian said.

A competition is also available for faculty and staff to recruit people to donate. When someone goes to donate, an option to list a person who referred them is available. The person who has referred the most individuals will receive a $100 gift card to the campus store and a $50 gift certificate to local restaurant Wood Ash Rye, which is located inside The Advenire Hotel.

The $50 gift card is a donation from the restaurant and the $100 gift card will be combined from the donation money and the development office.

Bagdoian said she hopes the competition will encourage faculty and staff to get involved and to get their students involved.

The development office is also hosting an event on March 10 in the Gardner Plaza from 8:30 a.m. – 11:30 a.m. Students will receive a doughnut from Daylight Donuts if they can show proof of a donation or that they shared it with someone in person or on social media.

“We encourage everyone to share it and donate that day,” Bagdoian said.

Johnson said she encourages people to donate because it can help more than just the current students, faculty and staff – it can help the future students and athletes as well.

Burr said he thinks the reach could be over 100,000 people from the 50,000 mailings of the advertisement and sharing on social media.

“It being its first year, it will be a great starting point, but it’s going to be… a tradition moving forward that will continue to build on,” Burr said. “I think this is going to be a great engagement, something that we’ve never seen here.”

To support Dixie Giving Day, share the special day on social media and use the #DixieGivingDay and watch the video on YouTube.