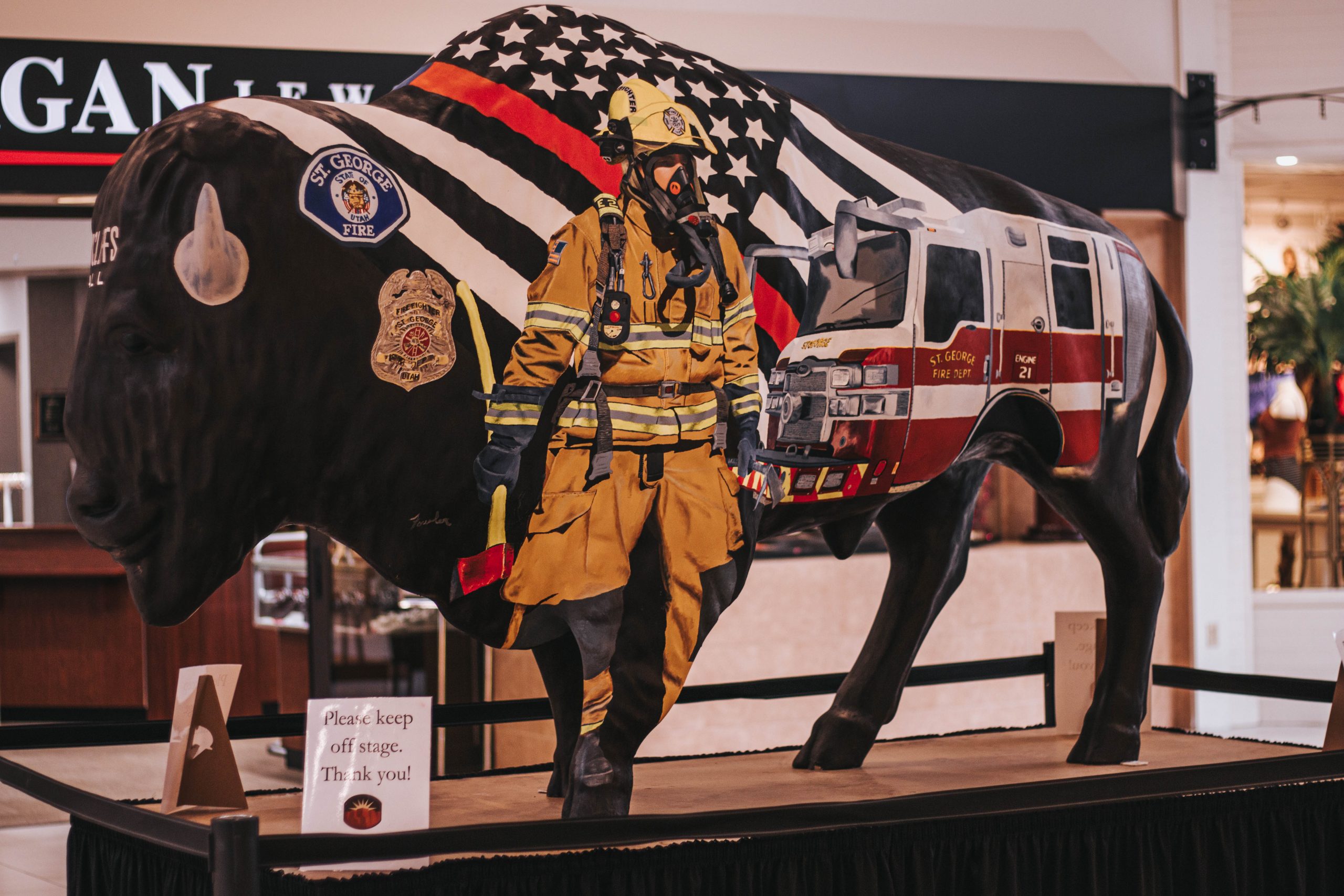 Another colorful statue is added to the list of painted bison scattered around St. George, this time with a powerful message for the community.

“Hero” the Trailblazer is a piece of art that is a part of Dixie State University’s Art in the City project. With the project, local artists submit an application to create a painting on bison statues, where their work and artistry can be promoted if they are chosen.

“Corey Ashby, the mall general manager, approached me on wanting to sponsor a bison to support DSU, but he also wanted to honor our city’s first responders,” said Jordon Sharp, vice president of marketing and communication. “We shared several talented artists with [Ashby] and his team, and they chose Todd Fowler due to [Fowler’s] amazing past work on painting military portraits and scenes.”

The bison is painted black with white horns. On one side, there is a detailed painting of a local firefighter and St. George firetruck accompanied by an outline of the American flag with a single red stripe in the background. The badges of the St. George fire and police departments are painted close to the bison’s face.

On the other side, a painting of a local police officer riding his motorcycle is the main feature. The officer is painted in front of another outline of the American flag, this time with a single blue stripe. Toward the end of that side is a red desert landscape with a bald eagle flying across it.

Fowler said he worked first-hand with Ashby and local first responders to create a sketch of what the bison would look like. “Hero” became a collaboration of several different ideas.

“After the concept and draft sketches were decided upon, I visited both police and fire departments with my camera and took several photos of one of our firefighters and motorcycle police officers,” Fowler said. “I wanted to paint actual living St. George heroes on the bison to give it a more personal touch. In my paint studio, I would take each section separately and draw it out in full detail.”

“This bison represents the hero that is in us all and the reason we choose to have fire and police on the side of the bison is because they really embody the run-into-the-chaos type mentality to put others above themselves and the selfless acts they do on a daily basis to help protect us,”

Fowler said he uses the art technique of realism as his main art style. He uses a very small detail brush for the entire work, which allows him to make the painting more life-like and add small details in shadow and colors.

“I have had so many people actually ask me how we put the graphics on the side of the bison because it looks so real,” Ashby said. “I am amazed every day at his talent. He painted the entire bison with a tiny little paintbrush to make sure there was no detail missed and I think he nailed it.”

Fowler said this project was especially important to him because of his personal connection to first responders.

“I was a firefighter in both the Navy and Coast Guard serving in both Desert Shield and Desert Storm before becoming a military Chaplain and Naval Officer for the [Church of Jesus Christ of Latter-day Saints],” Fowler said. “My father also served for 32 years as a firefighter before retiring out of Nellis Airbase; so the idea of first responders was and is close to my heart.”

Along with the Trailblazer statue, the mall offers other ways to honor first responders, such as a monthly broadcast on the radio through a partnership with Red Rock Broadcasting, sharing inspiring stories of hometown heroes.

“This bison represents the hero that is in us all and the reason we choose to have fire and police on the side of the bison is because they really embody the run-into-the-chaos type mentality to put others above themselves and the selfless acts they do on a daily basis to help protect us,”Ashby said.

“Out of all of the marketing campaigns we have done, this art project has been one of the most visible, meaningful and positive for our community,” Sharp said. “There is not a week that goes by that we don’t receive a phone call from a community member asking about the project and sharing their love for it.”

The statue is located inside the Red Cliffs Mall near the center of the building and will remain there for the next year, Ashby said. Hero will be moved to the exterior of the property when outside construction is completed.

“My hope is that when people walk by the bison, they have to take a second look, believing that there is an actual person standing in front of it,” Fowler said. “Then, the more they stare at it, the more detail they see. I hope people feel something when viewing our local heroes and how they put their lives in danger so we can be safe.”