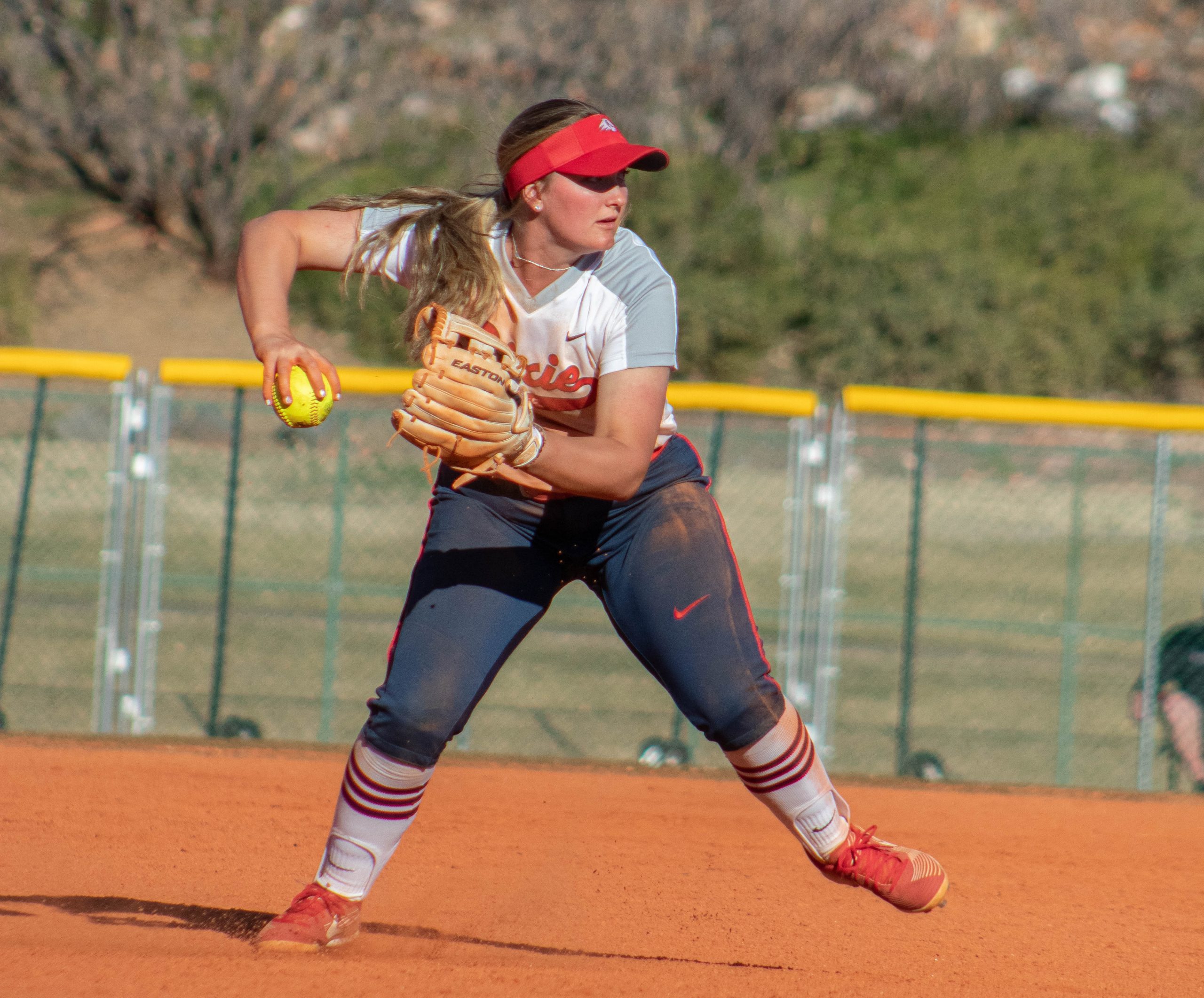 Laura Lockard, a freshman criminal justice major from Boise, Idaho, throws the runner out at one. She held her position on third base Feb. 8 at the Dixie State Courtyard Classic.

The young Dixie State University softball team showcased what it is capable of as hosts of the Dixie State Courtyard Classic on Feb. 6-8.

The Trailblazers made an early statement by defeating five teams who finished with a winning percentage record of 500 or better. Those teams were the University of Hawaii at Hilo, St. Mary’s University, Concordia University-Portland, California State University-Dominguez Hills and Western Washington University.

Even though DSU is starting the beginning of its season 6-1, there are some points to take away from this tournament.

Jumping Ahead to an Early Lead

The Trailblazers struck first in four out of the five games in this tournament. All four times DSU scored first they made sure to maintain their lead to seal the victory. Head coach Randy Simkins said the team talks about scoring early to put pressure on the other team and let the pitchers throw with a lead.

The Pros and Con of the Lineup

What was great for the DSU lineup throughout the tournament is one through nine can hit. No matter what part of the lineup is due up to bat, they can all contribute. The most contribution from the lineup was from the lead-off spot and second hitter.

Outfielder Hannah Hughbanks, a freshman exercise science major from Chino Hills, California, had a .368 batting average, with one home run and two runs batted in. Outfielder Brenna Cornwall, a senior biology major from Tremonton, had a .412 batting average, racked in four RBI’s and managed three walks.

Simkins said Hughbanks and Cornwall have been nails for the team by getting on base, having a high batting average, being quality at-bats, and playing as “fantastic” outfielders.

Cornwall said she’s confident with whoever is in the lineup because they get the job done, have great at-bats and put in their best effort.

“I don’t feel like coach [Simkins] can put in the wrong person right now because all of us are solid, we’re hitting the ball and seeing the ball well,” Cornwall said. “It’s fun to have a lineup like this that anyone one through nine and on the bench can get the job done when it’s needed.”

A great habit to have as a hitter is discipline. The Trailblazers are a disciplined team and are able to work the count to its favor. DSU managed 15 walks and struck out only 21 times.

Simkins said the team needs to be disciplined during at-bats because if they were to chase pitches outside the zone it was going to be a long day.

“We didn’t hit a lot of balls hard, but we were disciplined enough to not chase a lot of pitches out of the zone,” Simkins said.

Despite putting the ball in play and scoring runs to lead to victories, the lineup is inconsistent. The one, two and three hitters are making some noise with a .400 batting average. The four, five, and six hitters are not too far behind with a .341 batting average; however, things get funky with the seven, eight and nine hitters with a .225 batting average.

Simkins said the lineup is a work in progress and had a lot of different people in different places.

The pitching throughout this tournament was stellar. The pitchers combined for 28 strikeouts, giving up only 33 hits and six earned runs.

Pitcher Ashtyn Bauerle, a junior recreation and sports management major from Syracuse, said getting her first collegiate win against WWU was great because her teammates pushed her to be the best she could be.

Simkins said all four of his pitchers were great contributors, efficient and stayed ahead in the count.

Simkins said: “You have the hitters on their heels a little bit or have to chase pitches when you’re ahead in the count. it sets you up for success as a pitcher.”

The DSU defense needs to flip its switch if it’s going to stay consistent and making the pitchers day easier. The Trailblazers gave up seven errors total in the tournament, which doesn’t seem like a lot, but the moment and time in which the errors occurred put the pitchers in a jam and that brought more pressure to the team trying to maintain the lead.

Simkins said with the three new infielders and a new catcher, there’s going to be growing pains to deal with, but they’re going to clean it up before their next set of games.

The Best is Yet to Come

Don’t let the subheading trick you into a positive take away. What it means is softball has another tough seven-game stretch on Feb. 10 against Northwest Nazarene University in a doubleheader and the Cactus Classic tournament on Feb. 14-16 on the road.

Simkins said the team has the toughest preseason schedule on paper that they’ve had in the past. He said NNU might be the best hitting team in its conference and DSU will matchup against more teams that had a winning percentage record of 500 or better at its next tournament.

Simkins said he’s glad to get the challenge of other teams at the Dixie State Courtyard Classic because it helped his team see good quality pitching.

If the Trailblazers lineup can all click together, they’re going to provide a lot of insurance for their pitchers and not feel as much pressure. The pitching needs to continue to stay efficient to create success defensively.

DSU continued to be dominant by scoring early against NNU in its doubleheader on Feb. 10. The Trailblazers outscored the Nighthawks 14-1, DSU pitching continued to be efficient by combining for 17 strikeouts and only allowed five hits.