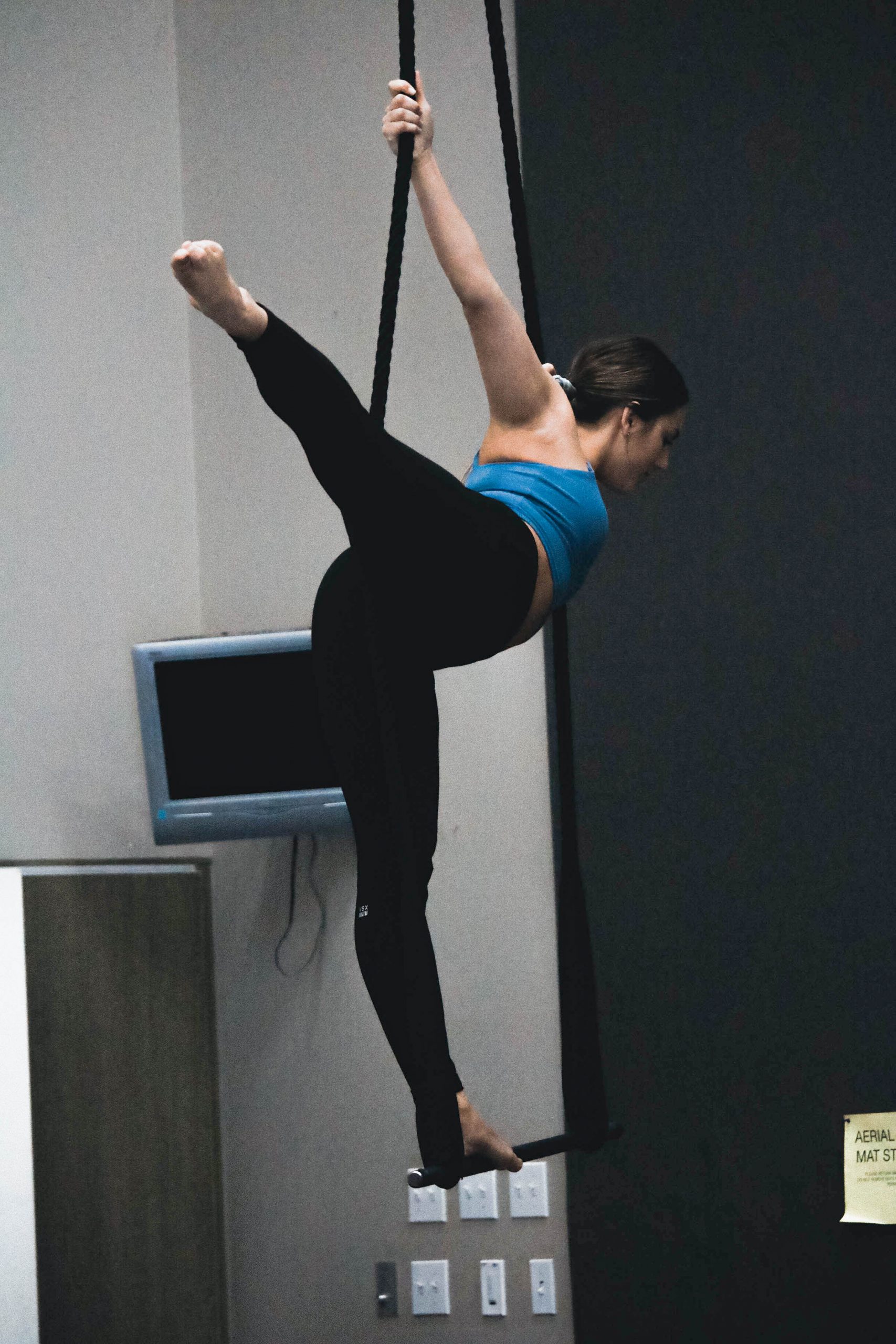 Makena Royer, a Sophomore dental hygiene major from Oregon is currently a student in Stitches Aerial 2 class. During class hours Makena and her partner work together to try and stay in sync with each other while on the bar. Photo by Nickelle Blanton

From dancing over water to dancing over a crowd of people, Elizabeth Stich, assistant professor of dance, teaches the only aerial dance course at Dixie State University.

Stich had her first experience in aerial dancing in 2002 when she was attending The University of Georgia. The dance company she was in had brought in a dance instructor to teach them choreography in aerial silks for a performance.

“It has remained interesting to me for 17 years,” Stich said. “I think about it and I wonder if some of my students in here [aerial dance class] will still be doing it in 17 years. I hope that some of them stick with it after school.”

Back then, UGA didn’t offer classes in aerial, but it now offers aerial and contemporary together.

“It was really intense because the guest choreographer was only there for a week and I had no upper body strength,” Stich said. “It’s not something that I was good at right away, but I think that’s why I like it. It’s something that I can work on and see improvement.”

She continued to take classes in aerial after that performance in other places that offered it around Georgia.

Stich said more opportunities for performing were made available

Moving from Georgia to San Francisco, Stitch said she spent a few years taking classes in San Francisco until she moved to Salt Lake City and was in a graduate program for dance.

She met another student in the graduate program that had some previous experience in aerial and was teaching a class. They collaborated together and had a small company that puts on performances and taught classes in Salt Lake City for 8 years.

Stich enjoyed the teaching experience and went to the New England Center for Circus Arts to receive some formal teaching training and also completed a year-long performance training program at NECCA.

When she moved to St. George she noticed that there weren’t a lot of aerial that was being taught at universities or places in Southern Utah.

“Luckily, they let me start teaching it here on campus,” Stich said. “Which is really cool because there aren’t that many universities that have an aerial class, and there’s really not much aerial in southern Utah. So we are building a community here now.”

Stich said she and a colleague are working on an article for the journal of dance education, talking about the benefits of aerial dance in higher education for other dance programs across the country.

Stich said aerial opened up a lot of performance opportunities, like performing at SeaWorld in San Diego, California. She performed aerial silks over the water as well as over a crowd of people at the Fire and Ice Gala at Dixie State University. She was also able to perform at other places around Utah, such as Corona Arch right by Moab.

Stich said she is excited for the fall semester to come with a new aerial composition course being added to the curriculum. Currently, the courses are designed so that students can take intro-level one to aerial and next semester continue with level two.

Intro to aerial dance is open to anyone who is interested. There are no pre-requirements needed to take the course.

“Anyone can do it,” Stich said. “ You don’t have to have any certain strength requirements in order to start. You can build strength as you go.”

Registration for the course opens up on April 1, 2020, and is open to all students at DSU. If you are interested in taking the course, talk to your advisor and see if early registration is an option since spots fill up quickly.