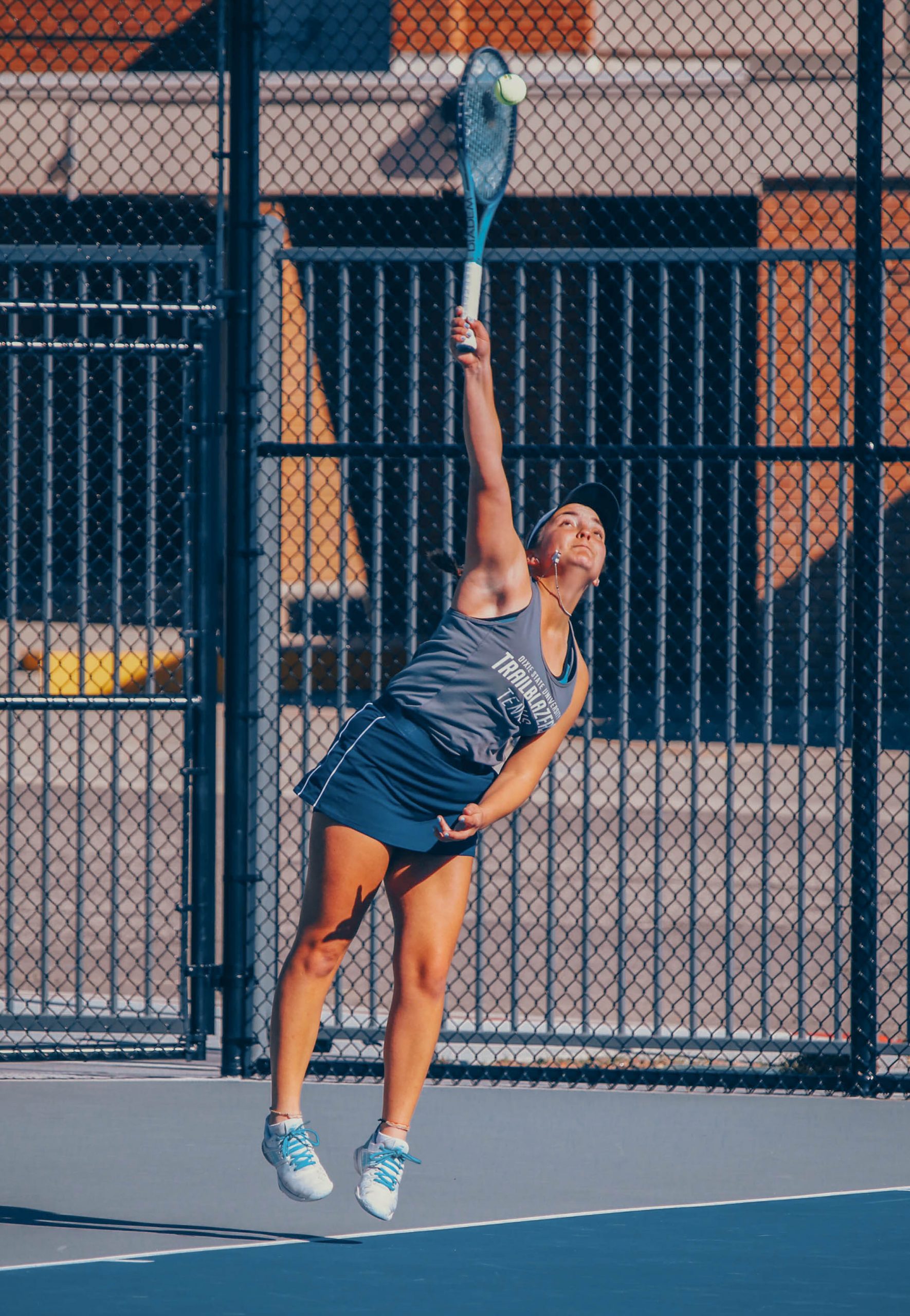 Juliana Honczaruk, a sophomore business administration major from Corrientes, Argentina, preparing to compete in the upcoming season as part of a Division I team. The Trailblazers will take the court for their first match on Feb 7th. Photo By Nickelle Blanton.

The Trailblazers last took the court 124 days ago when they defeated Colorado Christian University, 7-0.

“It’s actually great, in the fall it allows the freshman to get their feet wet and get a little taste,” head coach Eric Pelton said.

Pelton has been with the women’s tennis program since the sport was added to DSU Athletics in 2006, but this may be the youngest group he has worked with. The team holds five freshman, one sophomore and one senior. However, this doesn’t mean they aren’t excited for their upcoming matches.

Emma Templeman, a freshman finance major from Springville, said: “I love it, we have nothing to lose. [We’re going to] play our best and play hard.”

Templeman also said because the team is particularly young, it has been participating in a lot of practice doubles matches to see who it will fit well with as they head into the second part of the 2019-2020 season.

The Trailblazers are 3-3 going into their exhibition games this weekend, which posts a better record than some would expect with such a young group.

“We’ve got a lot of freshmen,” Pelton said. “Even with the youngness, they’ve been competing, doing well and fighting.”

The team continues to hold this mindset moving into the rest of regular season play.

Juliana Honczaruk, a sophomore business administration major from Corrientes, Argentina, is one of the two returning Trailblazers who gained experience on the court from last year’s matches. Honczaruk said she remembers playing against Weber State and Boise State last year.

“This year, I have more expectations,” Honczaruk said. “Last year, we played them and lost both of [the matches]. Since we don’t have anything to lose, we are just going to play the best we can and see what happens.”

Once DSU finishes up its two exhibition matches in Ogden, they will return home and prepare for the Trailblazer Invitational on Feb. 21-23. The Invitational hosts Colorado Mesa University, Western New Mexico University and Holy Names University over a three day span.

Last season, the Trailblazers defeated Colorado Mesa all four times they met. They were also successful against Holy Names and Western New Mexico winning those matches (4-3) and (6-1).

While the Trailblazers used to play where the new Human Performance Center is now, their home matches are now at 470 S 600 E., just west of the Atwood Innovation Plaza.