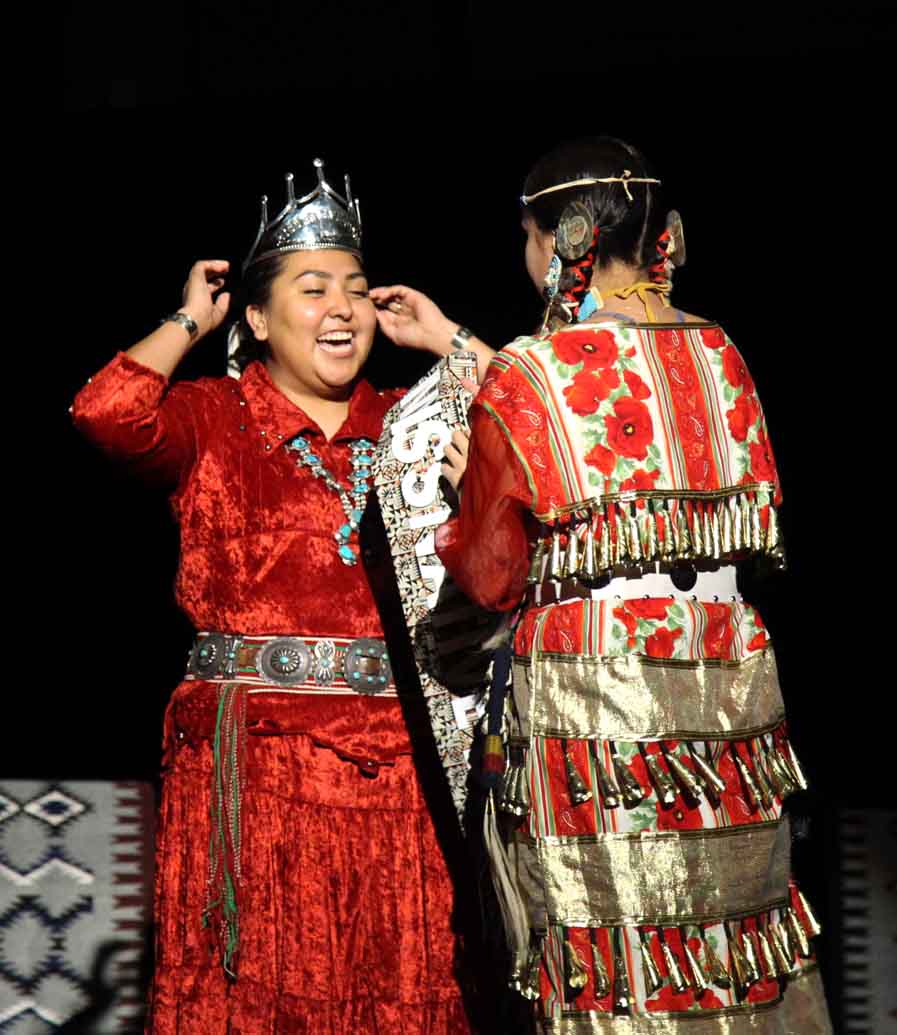 Phyllis Kitseallyboy, a junior exercise science major from Kirtland, New Mexico, was crowned Miss Native Dixie 2020. She received a $1000 scholarship along with the crown and sash of Miss Native Dixie.

Miss Native Dixie is more than just a competition; it allows for the audience to be immersed in the culture of various Native American traditions and ways of life. The contestants get to showcase their knowledge and in turn, teach the audience more about their culture for the night, said Cajun Syrett, a senior communication major from Bryce Canyon.

Elias demonstrated how to make a beaded piece of jewelry on a loom for her traditional talent. She said she learned how to bead on a loom from her grandmother.

“You can make many different pieces of jewelry from this,” Elias said. “You can make necklaces, bracelets and headbands.”

Benally showed the judges and audience how to make a small ceramic pot for her modern talent. She said she started making ceramics last year and wanted to incorporate it into her talent. Her traditional talent consisted of a presentation on how to shear sheep, which she hadn’t originally planned on.

“It was honestly something I picked out of my repertoire,” Benally said.

Kitseallyboy’s modern talent was a demonstration of a perfect golf swing.

Kitseallyboy said, “I wanted to do something unique and hadn’t seen anyone else do this in the years I’ve been going.”

The traditional talent Kitseallyboy chose to perform was a Navajo string game that is said to bring wisdom to the one playing it, she said. The string game consists of a long piece of string tied together on one end to form a big circle. The player can then create shapes by weaving the string through their fingers and hands.

“[The string game] has shown me a lot of wisdom and patience,” Kitseallyboy said.

The contestants expressed how through the performances, prayers and talent. Miss Native Dixie helps keep the ways of Native American traditions alive.

As Miss Native Dixie helps keep traditions alive, Benally said, “The most important thing we should protect for each tribe would be our language.”

Elias said the event is a way to push new boundaries for some who may be shy about joining the competition.

“I just think it’s a good experience, Elias said. “It pushes people out of their comfort zone; it pushed me out of mine.”

Kitseallyboy said she was nervous about first competing as well.

Kitseallyboy said: “I originally wasn’t going to [compete]. Just try it; you are an advocate for the people back home and once you try, other people will give it a try.”

Even if you are unfamiliar with the culture, Syrett said, Miss Native Dixie is an opportunity to learn from and will continue to be so.