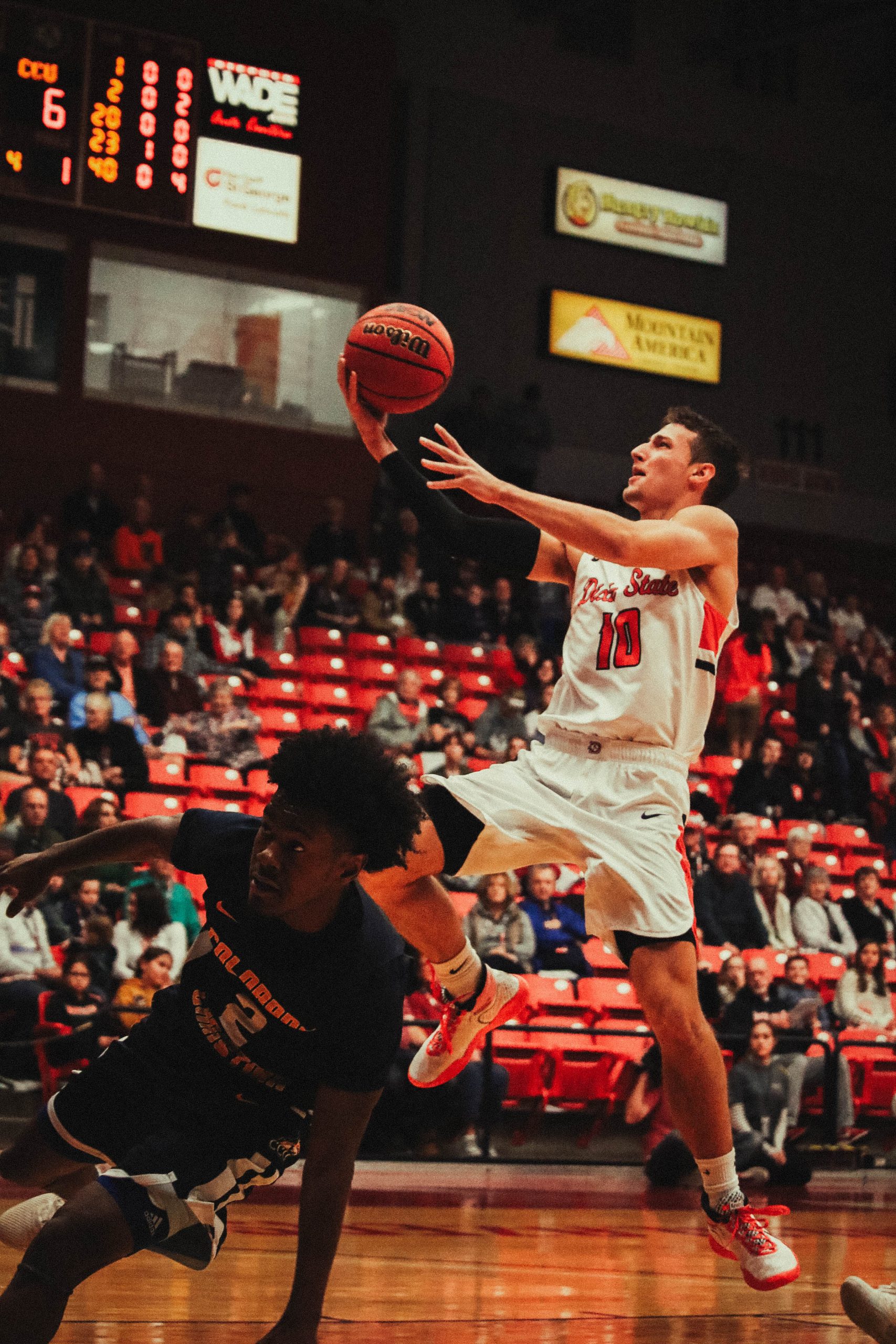 The Trailblazers defeated the Cougars 84-73 and blew out the Rangers 73-53. DSU improved to 14-3 overall with a 9-2 conference record.

Although the Trailblazers defeated CCU and RU with ease, what did we learn from watching both games?

Scoring in the Paint

Head coach Jon Judkins said forwards Jarod Greene, a junior finance major from Blackfoot, Idaho, and Hunter Schofield a junior exercise science major from Spanish Fork, had a great weekend and Schofield is working hard in the post to allow his teammates to find him.

Judkins gave high praise to his team for the high energy, playing together as a team, ball movement, sharing the ball and taking what the defense gives them.

Judkins said: “If I come off a ball screen, the big catches me and the hole opens we got to give it to him. If the big doesn’t catch it and he’s backing up we got to hit the hole. We’re getting better at that, we’re getting used to each other, we know what everybody can do, and it’s fun to see how they play together.”

The Contribution from the Bench

DSU’s bench played a big role in both games against the Cougars and the Rangers. The Trailblazers bench put up 33 points against CCU and 19 points against RU. Judkins said a player who sticks out, works hard every day at practice, and does everything he’s asked to do on the court is forward Jacob Nicolds, a sophomore business administration major from Gilbert, Arizona.

Schofield said it’s good to have guys like Nicolds come into the game because they bring that spark of energy and step it up defensively.

Defensively, the Trailblazers struggled to guard the wing and corner when they were in its man or zone defense against the Cougars. Although the Trailblazers kept CCU at 36% from the field and shooting 25% from three-point range, this can’t afford to keep happening. A team like Colorado Mesa who is known for its three-point making abilities can do some damage.

DSU’s defense against the Rangers was better by forcing RU to make bad shots on the field. The Rangers shot 33% from the field and shot 16% from downtown. Schofield said helping other teammates, playing one-on-one defense, and keeping the other team out of the paint were the core differences between games.

“We had to focus on our goal to make sure our one-on-one defense was good; everybody steps up, [does] their job and puts together a good defensive team,” Schofield said.

Judkins said guarding the wing and corner is something the team needs to keep working on and know when they’re in zone or man, who’s guarding who, find out the opposing player’s strengths and take that away.

Pro and Con from Turnovers

Guard Jack Pagenkopf, a senior business administration major from Brooklyn, New York, said when the other team drives to the basket, most of the team’s steals are based on the other team’s poor decisions or a deflection. Pagenkopf said he would scan the floor and the opportunity to score will open up.

Judkins said the Rangers started to trap his players which led to doing too much during a double team. Judkins told his players to pass the ball out of the double team and that’s something the team needs to learn when it happens.

“We haven’t had a lot of teams do that to us so, now it’s something we got to work on and see and get better with it,” Judkins said.

DSU has been getting the job done at home by winning nine out of ten games.

Judkins said traveling for road games is hard because it can burn out a team, like how RU was during the game.

If the Trailblazers continue its areas of success and fix the areas they need to improve, they’re going to succeed at its next set of home games against Colorado Mesa and Western Colorado. DSU will take on the Mavericks on Jan. 24 at 7:30 p.m. and the game against the Mountaineers will be on Jan. 25 at 7:30 p.m. at Burns Arena.