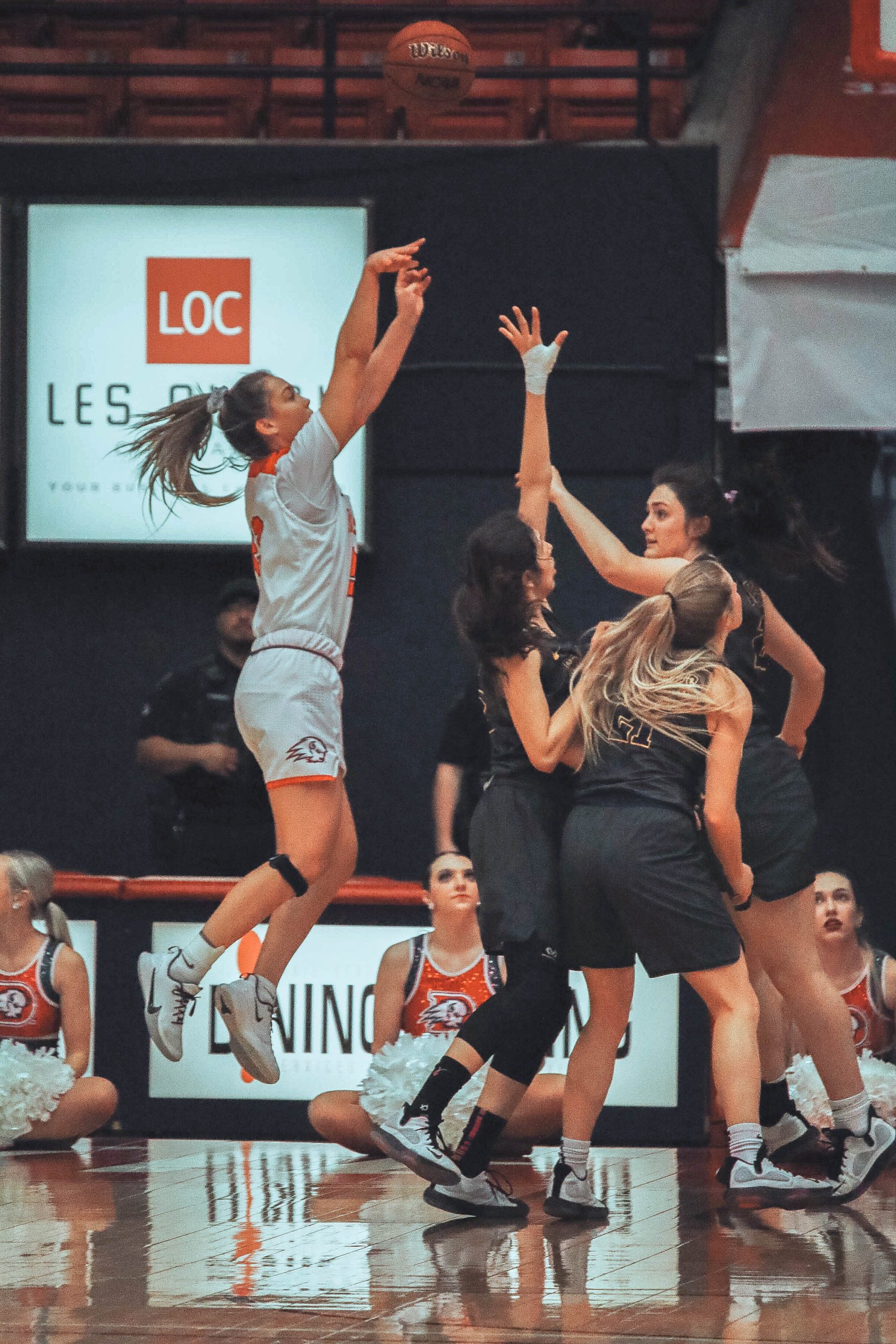 Ali Franks, a senior majoring in communications from Redding, California shoots a two-pointer against Colorado Christian University on Jan 17. Photo by Nickelle Blanton.

Ali Franks, a senior communication studies major from Redding, California, became the fourth player in DSU history to record more than 1,000 points as the Trailblazers completed the first half of their four-game home stand.

“To be honest, I didn’t really think about [the record],” Franks said. “When a kid is here for four years and they’ve had an opportunity to score the ball, I think that it’s just a good goal,” Franks said. “Moving on, now that it’s in the past, I think it’s going to be easier from here. When there is talk about [the record] it’s kind of just more irritating than anything.”

Franks said she will continue to stay focused as the Trailblazers move forward knowing there is unfinished business ahead of them.

The Trailblazers competed against the Colorado Christian Cougars Friday night, and faced the Regis University Rangers on Saturday. The Trailblazers battled hard all weekend and hoped to move up in the conference standings as they moved through the second half of the season. Over the course of the first two games, it was evident to see the Trailblazers will continue to push and get to the level they hope to be at, despite winning or losing.

When the two teams met Friday night at Burns Arena, CCU (5-11) jumped out to an early lead, entering halftime 38-28. The Trailblazers (12-4) used a second half surge to turn the game around and earned a hard-fought victory, 61-54. London Pavlica, a sophomore nursing major from Las Vegas, was the leading scorer for the team posting 14 points in just 31 minutes.

There wasn’t much time to recover as the next tipoff was under 24 hours away. The Regis Rangers (7-10) were in town and ready for their match up Saturday night against the fourth ranked team in the Rocky Mountain Athletic Conference, DSU. After the Trailblazers were within striking distance and down six at the end of third quarter, the intensity continued throughout the fourth. The two teams went back and forth, but ultimately the Trailblazers fell short with a final score of 77-68.

Madi Loftus, a senior individualized studies major from South Jordan, said: “We were a little slow in the first half, so I just wanted to be comfortable. We knew that the shots would come eventually.” Loftus finished with 18 points, one assist, and converted on four 3-pointers in the game. “I trusted my team to get the right shots,” Loftus said.

The Trailblazers finished with 14 assists on the night.

“I was proud of the way we got it going,” head coach J.D. Gustin said. “It’s way too early for hitting the panic button.”

With 11 regular season games remaining in the season, there is still plenty of time to work out kinks and get to where the team wants to be.

“We’ve got to be better…you have to just be able to overcome it, and we were just a little short tonight,” Gustin said.

The Trailblazers are preparing to face Colorado Mesa and Western Colorado this weekend in the M. Anthony Burns Arena. Gustin said: “You’ve got to start over Monday with a clean slate. Colorado Mesa, they’re really good, we’ll go back to the drawing board and dial up a nice one for them.”

DSU will square up against the Colorado Mesa Mavericks on Friday night and the Western Colorado Mountaineers on Saturday with both tipoffs scheduled for 5:30 p.m. in the Burns Arena.