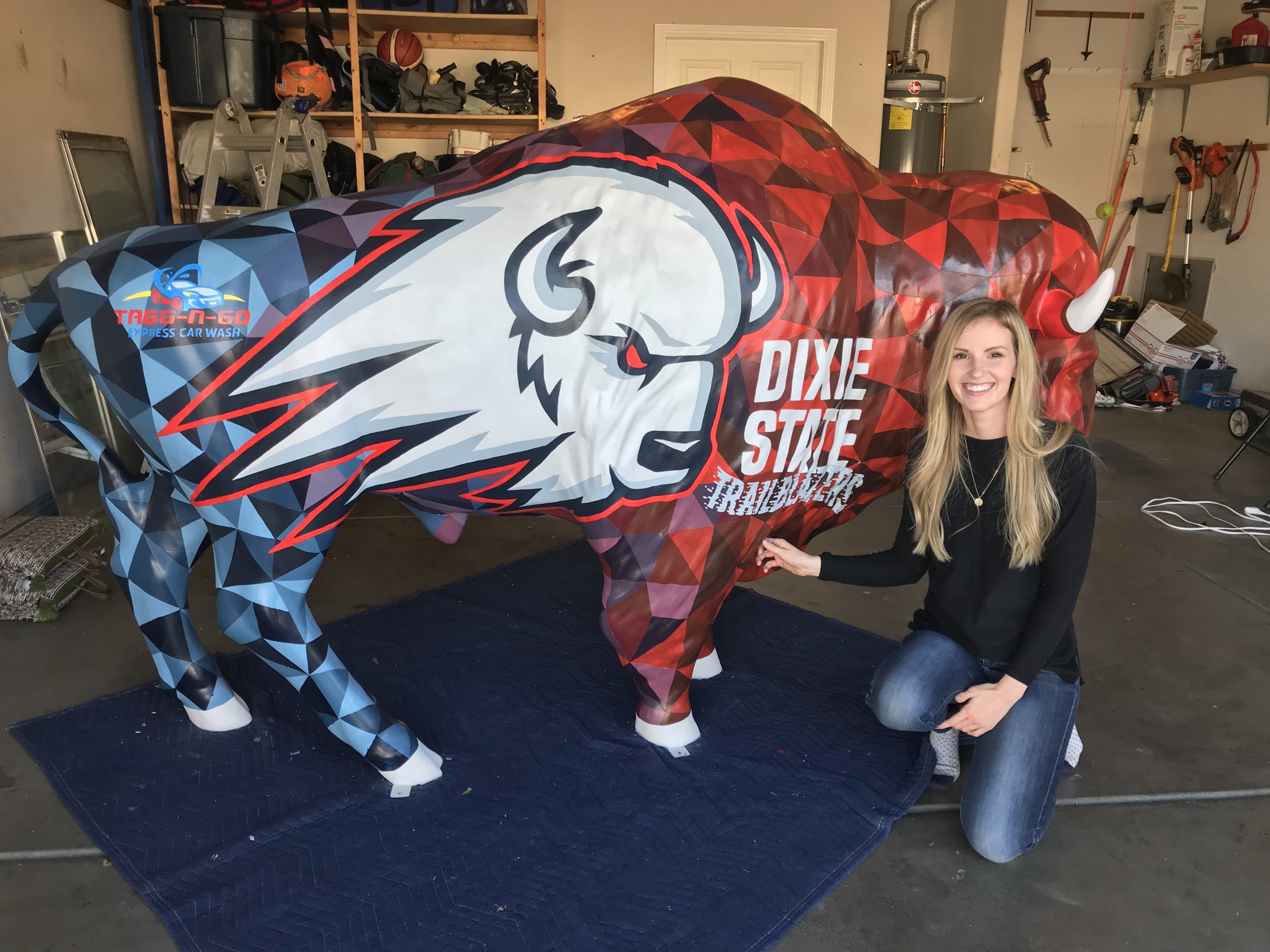 Tiffany Dewitt a Dixie State Alumni, was the winner of the underground mural. Her work stood out between the other contestants. Tiffany has done previous work for DSU such as the "Tagg-n- go" bison. Photo courtesy of Tiffany Dewitt.

The walls of Trailblazer Tunnel are an empty canvas waiting for vibrant hues of red and blue to be splashed across by mural contest winner Tiffany Dewitt.

Dixie State University’s Trailblazer Tunnel mural project gave artists on campus and within the community the opportunity to showcase their colorful creativity on the empty walls of the new pedestrian underpass.

Each applicant entered the competition by filling out a detailed application, which included their art portfolio, several photos of their work that showcased their artistic style, and an original design of their concept for the final mural creation.

“After the ribbon-cutting and grand opening of the tunnel, our department thought that the contest would be a great way to highlight artists in our community as well as show some Trailblazer pride in a fun way,” said Megan Church, DSU events and promotions specialist.

The winner of the contest would be awarded $1,000 and be highlighted on all of DSU Art in the City’s promotional material. A group of faculty and staff, including officials from the City of St. George, organized a committee to select the contest winner.

“It was hard to choose a winner because we were impressed with all the entries, but Tiffany [Dewitt] stood out,” Church said. “She totally has the DSU spirit, 100%. She is the perfect candidate for this project because of her background and creativity.”

Dewitt is a graphic designer, muralist, hand-letterer, illustrator and alumna of DSU. Her use of vibrant colors, attention to detail and artistic vision are what caught the committee’s attention. Her mural idea embodied DSU and all of its features, Church said.

“I studied graphic design in college and took my first typography class as a junior at DSU,” Dewitt said. “I loved what lettering allowed illustrators to create with letter forms and was drawn to learning the skill for myself.”

One of her projects was a large painted bison placed outside of Tagg-N-Go Express Car Wash. The bison features different triangular patterns, a gradient of colors transitioning from shades of blue to shades of red and the DSU logo.

“I find a lot of inspiration in geometric shapes, colors and clean lines,” Dewitt said. “I love simple flat illustrations and art that feels inviting and happy.”

Dewitt said she wanted to represent the thrilling, adventurous atmosphere DSU has to offer as well be inclusive while doing her mural mock-up. Her inspiration was the trailblazer mascot, DSU colors and desert life.

“Her submission included everything that was DSU, from the design and style, to the mascot and representation of the different colleges,” Church said.

Dewitt said this mural and her past projects with DSU were a way to give back to the school that had given her so much.

“The thought that my art could possibly become a piece of [DSU] traditions made me really excited,” Dewitt said.

Although the painting was expected to commence on Jan.1, there has not yet been any progress in the Trailblazer Tunnel.

Jyl Hall, director of public relations, said the project has not been carried out yet because official documents and contracts have not been signed. The project is expected to begin in February.

Regardless of the delay, Dewitt said she is thrilled to begin painting.

“I want my mural to inspire others to feel that they can make a difference,” Dewitt said. “That they have a trail to blaze and a path to create in this life. DSU can help play a part in helping them find and begin carving that trail.”