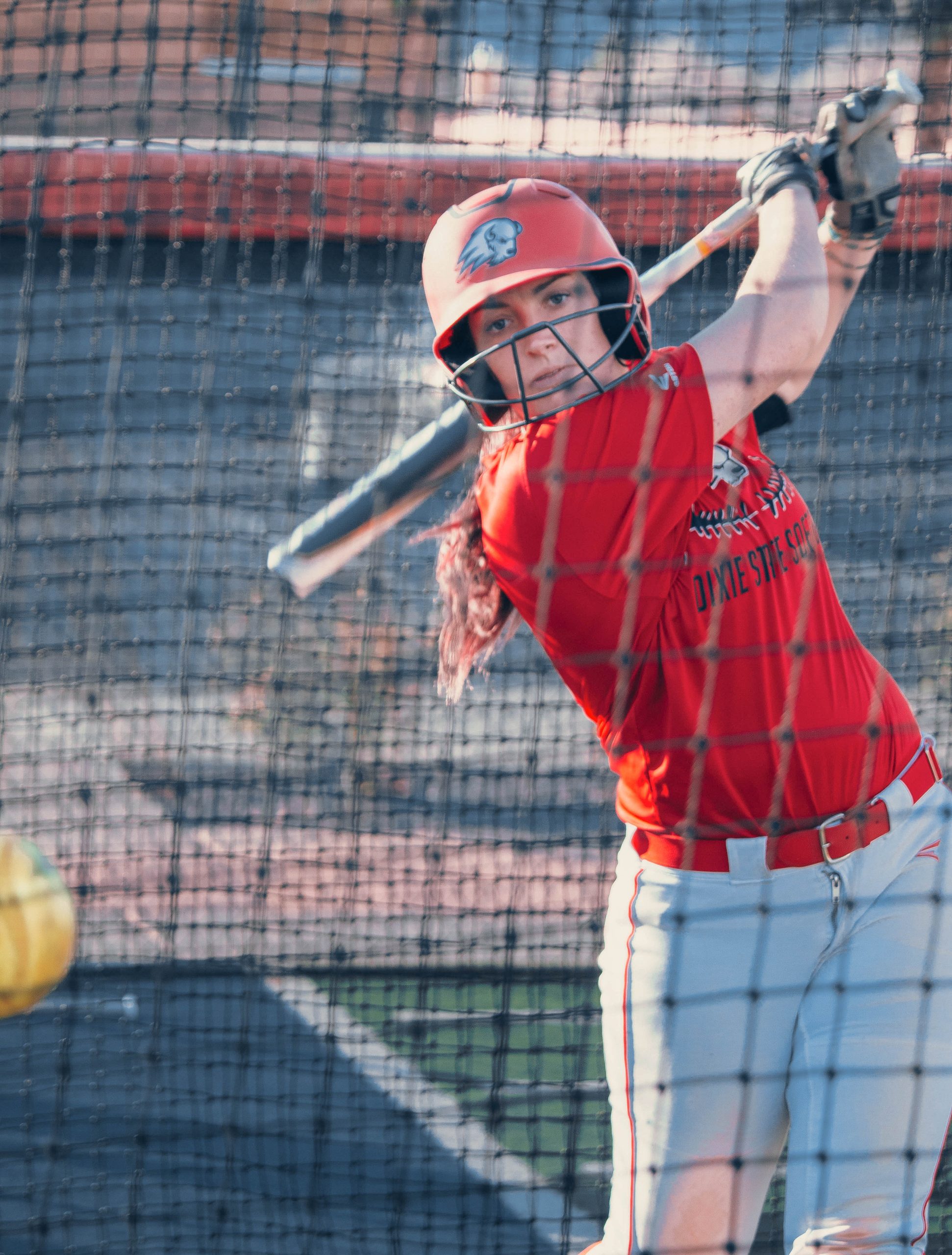 Kori Gahn, a senior medical laboratory science major from Phoenix, Arizona working hard in the batting cage as the team gets ready for the season. Kori worked hard to not only continue improving herself during their practice but to help her teammate improve as well. Photo by Nickelle Blanton.

Practices have officially begun for the Dixie State University softball team and its main focus in order to repeat last season’s success is to get 1% better every day.

“Yesterday we did a few things, today we’re trying to make those things better — trying to work harder in the weight room and on the field,” head coach Randy Simkins said. “These kids are coming early to work out; that’s going to be a big thing.”

The Trailblazers finished No. 3 in the Rocky Mountain Athletic Conference with a 42-13 overall record and 31-9 in conference play last season. DSU won the 2019 RMAC softball tournament and went on to play in the NCAA Division II South Central Regionals.

The team placed No. 5 in the RMAC leader summary, No. 2 in pitching and No. 3 in fielding. Simkins said the success and the statistics can lead to a target on the team’s back, making its season more difficult in terms of success.

First/third baseman Kori Gahn, a senior medical laboratory science major from Phoenix, said there are going to be high expectations for the team, especially with the eight new freshmen.

Gahn said: “We have a lot of [freshmen] this year, which is great because we have five seniors – me being one of them that are leaving this season. It’ll be good for them to get the ropes, learn the plays and get all of that stuff done.”

Third/first baseman Mikaela Thomson, a junior business administration major from Herriman, said it’s a big deal to have the eight freshmen because it pushes the returning players to not only maintain their spot, but earn their spot again. Thomson said this will make the team’s chemistry stronger and they will work together better.

Simkins said he has to replace a second baseman, shortstop and third baseman because of the seniors who played in those positions for the last two to three years. The freshmen will compete for those positions and Simkins hopes they will step in and play right away.

Simkins said: “We have a lot of new faces; our infield will look vastly different this year. [We’re going to] find out who’s going to be the best fit and where because we have a lot of young kids that can play multiple infield positions.”

Pitcher Cambrie Hazel, a junior general studies major from Spanish Fork, and pitcher Carissa Burgess, a sophomore business marketing major from Ellensburg, Washington, were the dynamic pitching duo for the Trailblazers last season. They have a combined total of 51 wins, 12 shout outs and 300 strikeouts from last season.

Simkins said he’ll look to heavily rely on Hazel and Burgess again for this season, but the pitching will also have more depth.

Outfielder Brenna Cornwall, a senior medical radiography major from Tremonton, said what she’s walking away with for her last season at DSU is not taking anything for granted.

“You only get to play with this group of girls once and you only have the types of relationships once with these girls because each year it’s a different team with new chemistry and aspects to it,” Cornwall said. “You never know when it’s going to be your last play. We’ve had some people who’ve been healthy and one practice or one game they’re out for the rest of the season. So, I try to put that into my everyday life.”

The Trailblazers will have their first game at home on Feb. 4 against Central Washington University at Karl Brooks Field.