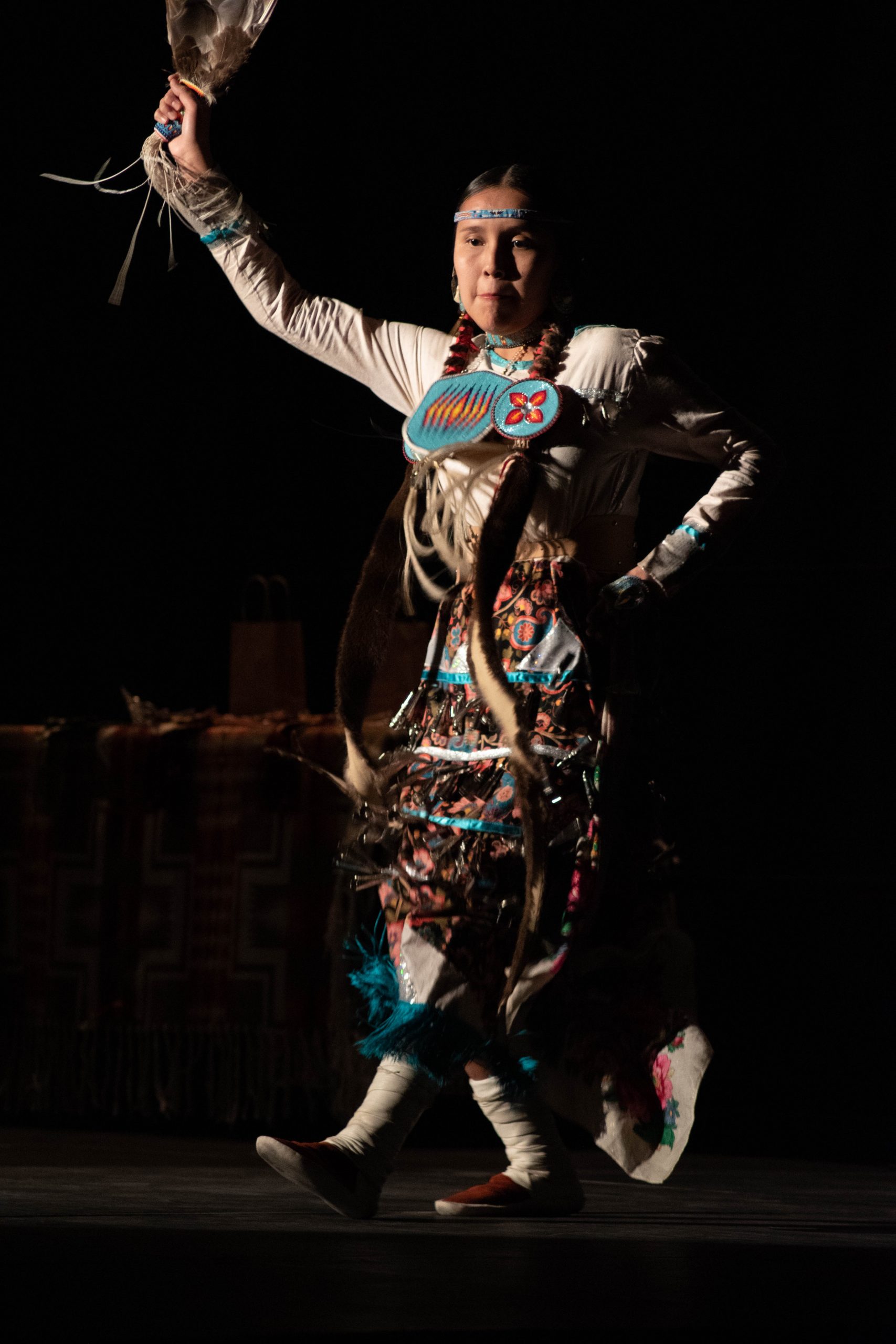 Marissa Clitso, a sophomore psychology major from Kanab, performed a traditional dance from her Navajo culture in the 2019 Miss Native Dixie pageant. The pageant is an important way for Native American students to showcase their heritage. Photo by Tia Walker.

The spotlight shines down on you brightly, you take a deep breath and remember why you entered the Miss Native Dixie Pageant: to represent your heritage.

This event is a way to proudly celebrate who you are and share the beautiful customs of your culture with others. You are bringing diversity to Dixie State University.

Three high-spirited contestants have the opportunity to represent their Native American cultures while competing for a crown at the 24th annual Miss Native Dixie Pageant on Jan. 29.

The candidates will be judged on their performances of a traditional talent, modern talent and an answer to a complex on-stage question.

“Miss Native Dixie is a contestant who understands and appreciates her culture,” Nelson said. “She is someone who goes the distance in the educational world. In addition, she is someone who can inspire and empower young, impressionable girls.”

Each of the candidates must be someone who gracefully represents herself and her culture, completes service within the community, is exceptional in school and plans to graduate from DSU, and is a role model to all those around her, Nelson said.

Nelson said once someone is given the ultimate title of Miss Native Dixie, she must resume the significant duties of attending the DSU Homecoming parade, visiting a variety of schools within southern Utah, educating youth on Native American culture, and assisting at various scholarship fundraisers.

“When I first came to DSU, many people did not know what my ethnicity was or how important it was to me,” Duncan said. “Being able to use the pageant to represent my Navajo culture gave me a way to show people all about where I come from.”

Duncan said how it is essential for candidates to carefully prepare for the pageant. To educate others, they must fully understand their culture and rehearse continuously to perform traditional dances or speak their native tongue.

“I have been preparing and practicing my talents that I’m going to be performing with my friends and family,” said Cristal Elias, a sophomore exercise science major from Cedar City. “I would love to bring more recognition to this event for people who may not know what we do at this pageant.”

Nelson said Native Americans are not a long-forgotten people, and the pageant allows for everyone to recognize them for their contributions, especially in southern Utah.

“It gives the opportunity for our DSU students to recognize and see that Native Americans aren’t a relic of the past,” Nelson said. “Their culture is very much alive and thriving.”

The Miss Native Dixie pageant will take place in the Kenneth N. Gardner Student Center on Jan. 29 at 7:30 p.m.