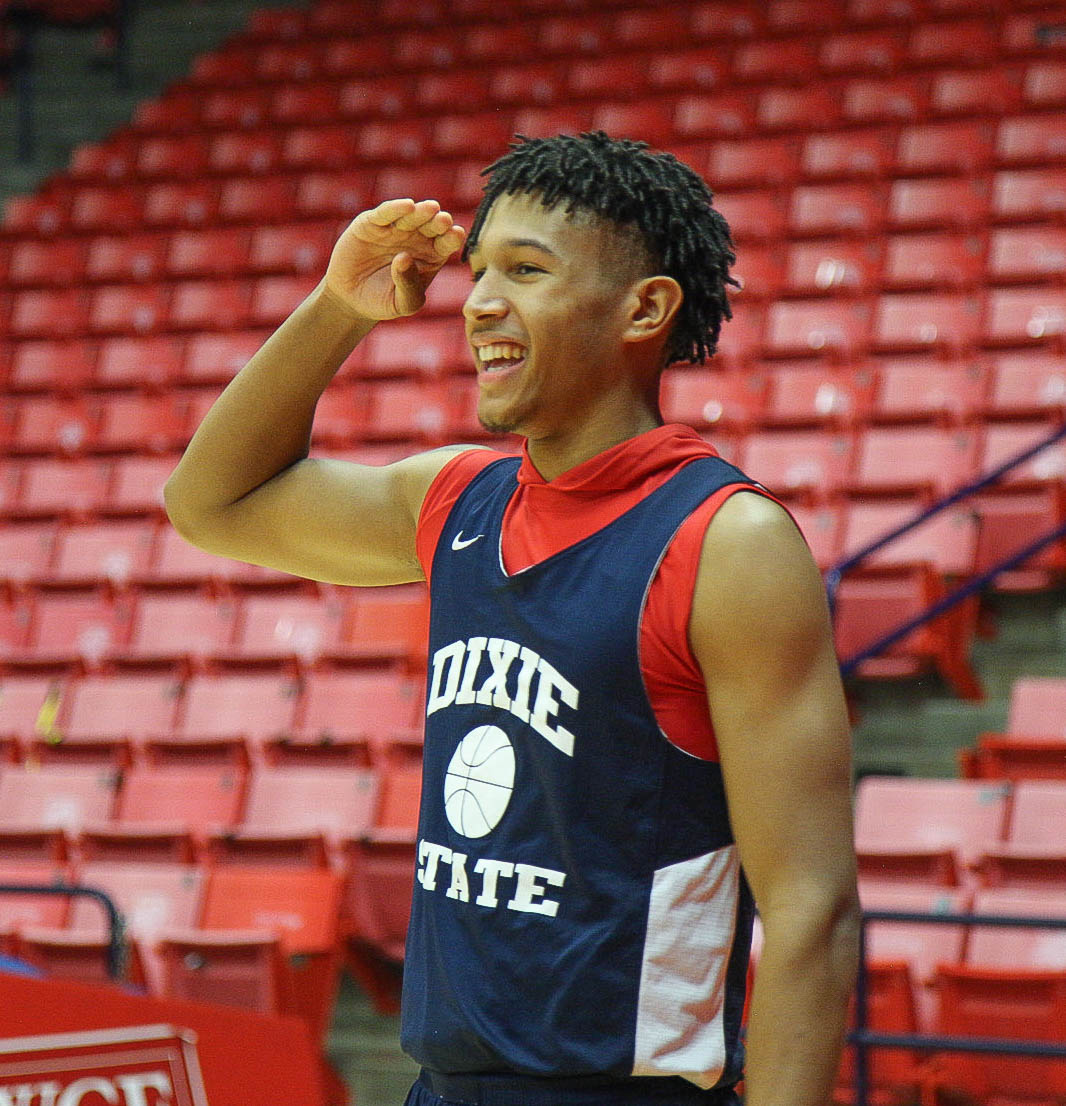 Frank Stain, a freshman general studies major from Inglewood, California and is a new addition to the Dixie State University Basketball team. He has a lot of ambitions on and off the court and stain states, “I wanted to come and make history.” Photo by Jessica Johnson.

Frank Staine is only a freshman, but he sure isn’t playing like it.

Averaging about 11 points per game and shooting almost 50% from the field (49.5%), he is having a great start to his collegiate career at Dixie State University. With the team playing its 14th game on Friday, Staine is making a much bigger impact than most freshmen could.

“It’s a big part of my life; I feel like growing up there made me tougher, you know?” Staine said. “Obviously, it’s not the greatest area in the world, so I feel like I have thick skin. So, whenever I get on the court or anywhere else, nothing can really bother me the way things did back there.”

Staine said the attitude he developed from his hometown has been evident this season as he is thriving at DSU.

While in high school, Staine was getting recruited by many different schools around southern California, but also some other nationally known schools like Princeton University. He said the experience he had on his official visit to DSU during the recruitment process played a big part as to why he chose to make southern Utah his new home for the next four years.

Staine said: “I think on my visit, I felt like I really developed a relationship with everyone. I just talked with the people that I knew I’d be around every day and I got a better feeling than any other school I went to, so I felt like I belonged here.”

He said he would also give credit to Trailblazer Nation. Staine said knowing there would be thousands of people watching him play had a big impact on his decision to come to DSU.

With the stress of figuring out where he would play, Staine also leaned on his family.

“My mom and my brother [were] two main focal points when I was getting recruited; they made sure I always kept my head on straight,” Staine said. “Like, just because I had an offer from this school or that school, you are still just Frank, and them keeping me level-headed progressed me to be where I am today.”

Staine said being a freshman on a collegiate team can be a struggle as you work to understand new game plans with new coaches, create chemistry with new teammates and develop the mindset the team has had in the past.

“It was kind of rough at first; like, I couldn’t even walk to class because I’m sore,” Staine said. “I couldn’t keep my eyes open in class, but then my guys are always there waking me up like, ‘Did you go to class today? Are you going to class today?’ and them being there for me, going through what I’m going through, has helped me a lot.”

Staine said he doesn’t take any of the credit from his preparation for the college jump, but rather gives it to his coaches and teammates.

“I’d have to thank my coaches — my seniors that have been here already,” Staine said. “Since day one, they have all been helping me.”

This chemistry and bond the team has formed is evident as the Trailblazers currently hold an 11-2 record (6-1 in conference play).

Not only is Staine enjoying and excelling in the role he is having on the team, he said, but his coaches and teammates are also enjoying him being there.

Head coach Jon Judkins said: “He’s been a great new addition. He’s only a freshman, and sometimes I think we really have to slap ourselves and realize that. He’s way ahead of where we thought he would be, and we just feel the future for him is going to be really bright.”

Judkins said he is hopeful for Staine and has good reason to be. He currently holds a 41.8 three-point percentage and has improved on the other side of the ball as well.

Guard Jack Pagenkopf, a senior business administration major from Brooklyn, New York, said, “Coming in he was a good player, but he had a lot to work on… he’s gotten a lot better at defense.”

Staine is also focused in the classroom. He is currently planning to major in finance and doing his best to show DSU fans he is not only a great athlete, but a great overall individual.

“I’m a people person,” Staine said. “Being able to interact with the community outside of the games is a big focal point for me. If you’re amazing on the court and not cool off the court, who are you?”

As the season continues for the Trailblazers, look for Staine to continue contributing to the team as they get ready for the post-season.

Despite his success so far, Staine has much bigger goals in mind for himself and the Trailblazers.

“I wanted to come and make history,” Staine said. “I want to try to raise my level as the school raises their level so we can keep the fans happy.”