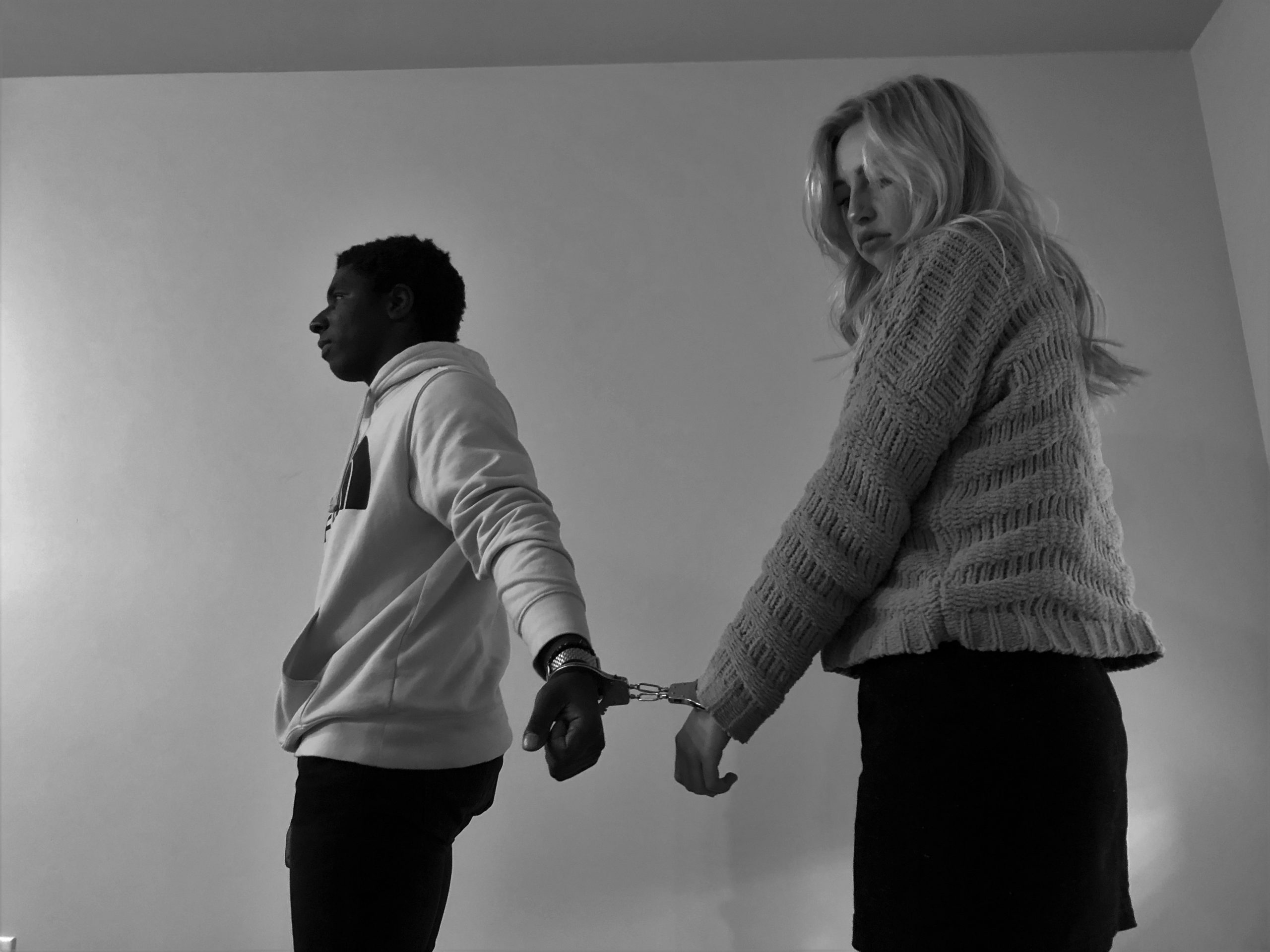 Nathan Thill, a sophomore media studies major from Orem, and Adison Edwards, a sophomore general studies major from Bluffdale, represent two people who are trapped in an unhealthy relationship. The majority of reported cases of those who experience physical, emotional and spiritual abuse in a relationship involve women between the ages of 15 and 24. Photo illustration by Kristi Harris.

She attended a high school birthday party with her friend where she caught a boy’s eye from across the room. She was instantly mesmerized. Her friend exchanged their phone numbers for them and they began talking. Shortly after, he asked her to be his girlfriend. It was new and exciting… until it wasn’t anymore.

Leah Zeiger was 15 when she met a boy who she thought she loved. Soon after the beginning of their relationship, he started getting paranoid that she would cheat on him. Then he started getting overly jealous of her speaking to any other guys. When they argued he would trash talk and threaten her. Then, it escalated to physical violence. After arguments, he would beg for her forgiveness and guilt-trip her into forgiving him. Then it would happen all over again.

Elizabeth Bluhm, advocacy coordinator at the DOVE Center, said in the last two years she has worked with nearly 100 women and two men who have experienced different types of unhealthy relationships, including physical, emotional and spiritual abuse.

“The ones who have experienced the physical abuse always say the other two are the worst [because they’re] more scarring and harder to get over,” Bluhm said.

According to loveisrespect, 43% of college women in relationships report experiencing violent and abusive dating behaviors.

The majority of cases involve women between the ages of 15 and 24, Bluhm said. Younger women get into these relationships at young ages and do not understand what a healthy relationship should be.

Bluhm said the prominent reason people are hesitant or can’t get out of their unhealthy relationship is because it begins at such a young age.

“The younger you are the less emotionally mature you are to even recognize the warning signs of an abusive or a manipulative person,” Bluhm said. “People should be taught at a younger age how to avoid unhealthy relationships and recognize warning signs.”

Statistics show one in three adolescents in the United States is a victim of physical, sexual, emotional or verbal abuse from a dating partner.

Cindy Cole, Dixie State University title IX director, said those who grow up in an unhealthy dynamic may have trouble steering away from that lifestyle because they don’t know any better.

People end up in relationships based off the environment they grew up in, Bluhm said.

Individuals who grow up with autocratic parents are more likely to find themselves in an unhealthy relationship because they were raised being told how to feel and what to think, Bluhm said.

“That [autocratic care-giving] sets people up for getting into a relationship where they’re not given choices and they’re told and controlled,” Bluhm said.

This kind of abuse can lead to substance abuse, eating disorders, risky sexual behavior and further domestic violence, according to loveisrespect.org.

Zeiger said she suffered physical and mental trauma, including severe depression and isolation, and it was hard to become comfortable in any relationship afterward, both romantically and with friends.

“I urge survivors to find the support system that works for them — family, therapy, running, screaming into a pillow, writing a book… whatever it may be,” Zeiger said.

Zeiger said she pursued art as a way of expressing what she went through in a productive and healthy way.

“Mainly, I used writing and dancing to help process my experience and to help tell my story in a way I felt I could control and be proud of,” Zeiger said.

Zeiger said she also received support from her parents, friends and a therapist.

Bluhm said having a good role model and open communication can prevent or help get someone out of an unhealthy relationship.

Zeiger said she stayed in the unhealthy relationship out of fear of being alone and in hopes she could change him into a better man.

“He convinced me that I needed him to breathe,” Zeiger said. “I was scared to not give him what he expected.”

Another factor in victims staying in an unhealthy relationship is love; they feel a strong sense of love for that person and it’s harder to leave than people think, Cole said.

“We as a society need to recognize that [abusive relationships] are still happening… and we need to be out there helping people we know and not blaming the victim,” Cole said.

Bluhm said she is seeing more men come forward and overcome the stigma of men not being able to be abused.

“Slowly but surely some of the societal norms are getting changed and opening up for people to come forward,” Bluhm said.

People are wary to come forward due to various barriers including fear of being blamed, retaliation and social pressures, Bluhm said.

Cole said sometimes it helps victims to share their story with the world because it is freeing and liberating to be able to say they’re not a victim anymore.

Zeiger said, “I want every survivor to know that it’s not their fault and that the world is a better place because you survived.”

If you or anyone you know are in an unhealthy or abusive relationship, you can reach St. George DOVE Center’s 24-hour hotline at 435-628-0458.