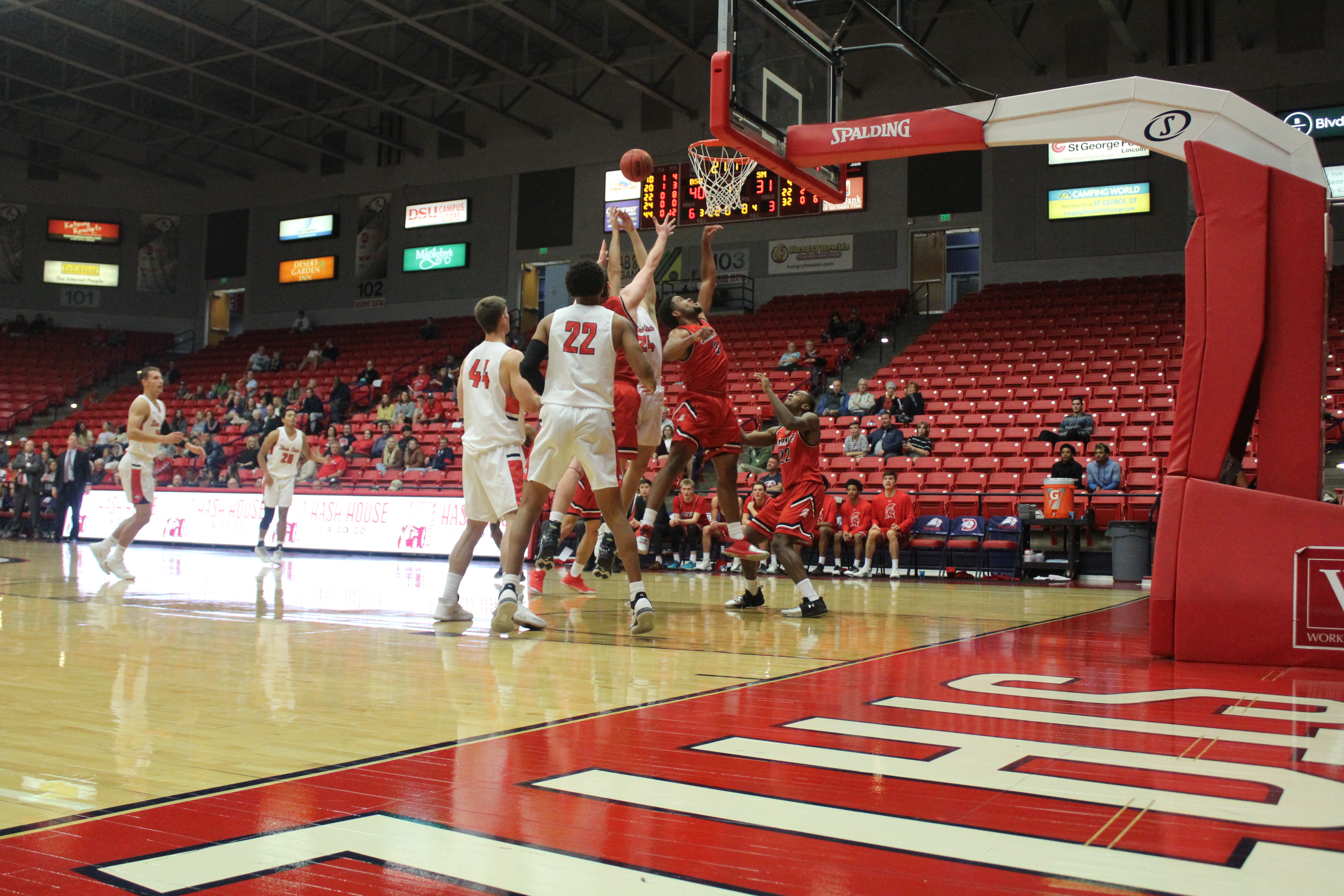 Jacob Nicolds, a sophomore business major from Gilbert, fights to put the ball up against rivals Saint Martin’s. The win on Nov. 16th against the Saint Martin’s was the perfect way to start off DSU’s men’s basketball season off. Photo by Madison Boyd.

DSU hosted Providence (Montana), in-state rival Westminster College and the Saints in the tournament on Nov. 15 and Nov. 16. The Trailblazers were coming off a tough exhibition loss against the Argonauts heading into its match up against SMU.

Prior to the Trailblazer’s game against the Saints, head coach Jon Judkins told his team how hesitant they were shooting the ball and how overthinking lead to missed shots.

Judkins said: “I think sometimes we’re our worst enemies, like, ‘hey was that a bad shot or a good shot?’ They should know what that is, so we spent a lot of time today during shoot around shooting those glass jumpers and short corners and tonight they didn’t hesitate, they went right into it. When you do that, you’re going to make those most of the time.”

SMU got off to a 4-2 lead over DSU in the first minute of the first half. Then the Trailblazers took the lead on a 9-0 run led by forward Frank Staine, a freshman finance major from Inglewood, California, who put up five of the nine points. Halfway through the first half of the game, DSU had an eight-point lead making the score 26-18. Less than two and a half minutes left in the first half, SMU made the game close and were only trailing DSU 33-31. The men’s basketball team ended the first half on a high note and extended its lead to 40-33 heading into halftime.

Coming out of halftime, the Trailblazers continued its hot streak from the end of the first half and extended its lead to 13 points, making the score 46-33. However, the Saints kept battling back and both teams continued to exchange baskets as SMU tried to claw its way back into the game while DSU was trying to put the game away. Less than a minute to go in the second half, SMU made a literal last-minute effort to make the game interesting and were only down by four-points. Fortunately, Pagenkopf put the game away for DSU by making two free throws and sealed the victory for the Trailblazers defeating the Saints 75-71.

Newbold said setting his new career-high in points was fun, but he enjoyed getting the win more with his teammates.

Judkins acknowledged Newbold’s ability to score and get open to allow more opportunities for the team to score.

Judkins said: “Josh, we knew we can get the ball at the high post against these guys. Josh and Cameron [Chatwin] are really good at that 15-footer especially Josh. He took advantage of that tonight; he found those holes and our guards found him.”

Staine said the chemistry and working together as a team is great, they show love for another’s success and they get excited when somebody else scores. Despite having a lot of new faces on the team and only three returning players from last season, Staine said the expectations are set high for this season.

“[We’re] trying to get better every day, looking forward to trying to put another banner in, of course, and ending the Division II route on a high note,” Staine said.

Judkins said the Saints out rebounding DSU and being hard to guard are the reasons they were able to stay in the game. Judkins said working on those skills will help set the successful mindset for defense.

“We got to challenge them every day,” said Judkins. “Come into practice every day and let’s improve a little bit every single day. If we do that, it’s going to be a good year for us.”

The Trailblazers will have their next games on Nov. 22 against Lake Superior State at 5:30 p.m. and Nov. 23 against Alaska-Fairbanks at 5:30 p.m. in Salt Lake City.