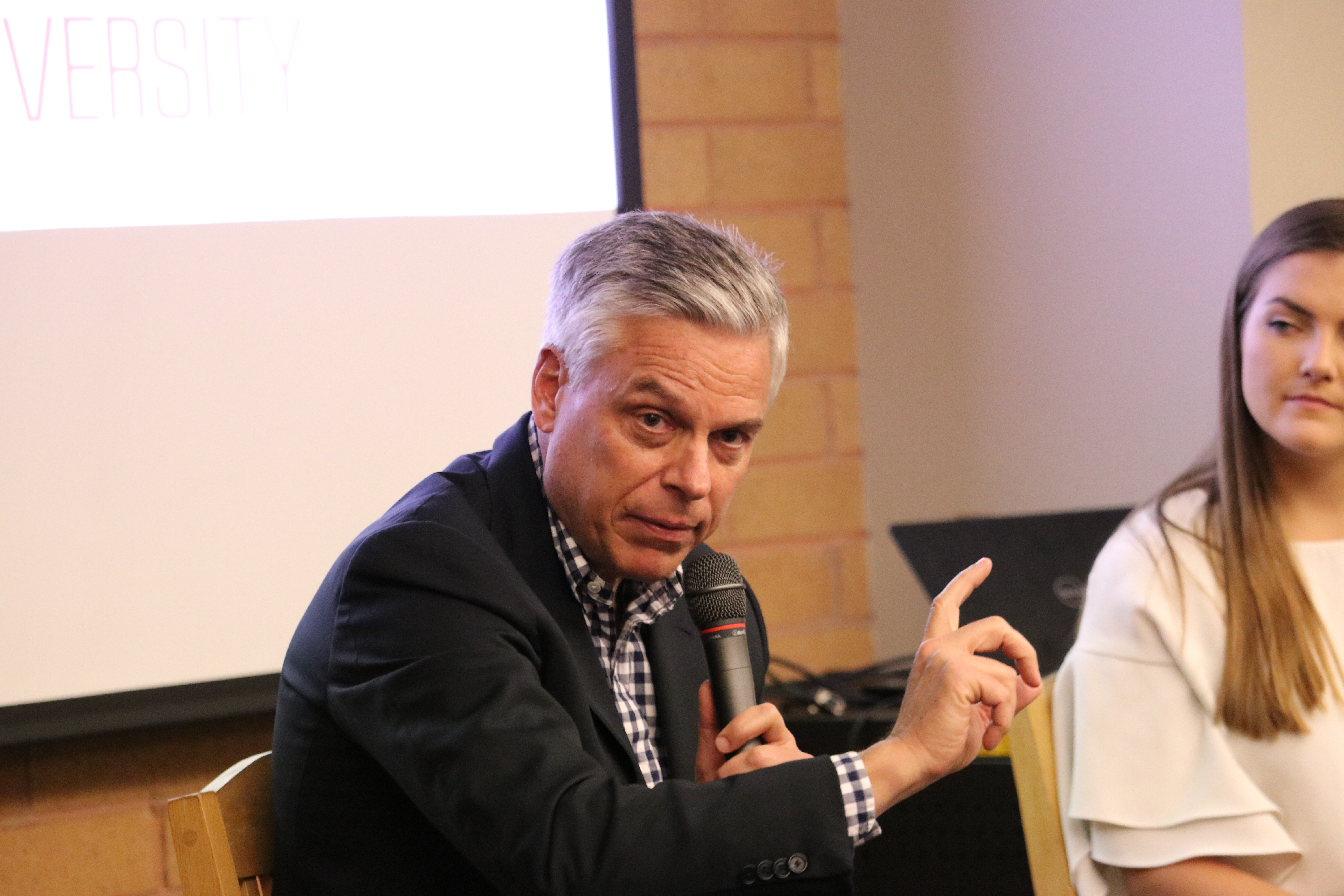 Former Utah Governor Jon Huntsman Jr. spoke at Dixie State University on Nov. 15 following his announcement to run for another term as governor.

“I am running this time because we are the victims of our own success,” Huntsman said. “But now our biggest challenge going forward isn’t necessarily economic growth. It’s how we are going to accommodate the next million people who are going to want to call Utah home.”

Huntsman said as governor he wants to bring awareness to mental health issues. Huntsman said not enough is happening when dealing with mental health in the community; specifically that it is an all hands on deck issue that involves the government, religion, foundations and community-based people.

In addition, Huntsman said he hopes the state of Utah produces higher-end manufacturing jobs. He made points on education and how there needs to be more technical training and certification opportunities for people who can move into the workforce where areas are populating quickly.

“Every kid has a genius inside, the problem is we don’t find it soon enough,” Huntsman said.

Utah has a 40% turnover rate for teachers after three to five years, Huntsman said. This is because of the lack of compensation. Huntsman said the high turnover is bad for the classroom, ultimately affecting the students in a negative way.

“I am running this time because we are the victims of our own success,”

Huntsman said there are currently duel emergent classes being offered to students in the Washington County school district where students are speaking fluent Chinese.

Huntsman encourages students to embrace all countries that have Chinese as their native language. He said China will be a country the US will always have to deal with; it’ll be a mixture of competition and collaboration.

Study abroad coordinator Jenny Callahan said, “There’s no way to avoid the politics in China, but it certainly does not hurt to also look at other locations that might fulfill what we need for those learners.”

Preserving the quality of life is Huntsman’s plan to prepare Washington County for the migration of a quarter of a million people. The key is how to stay ahead of the growth curve. Huntsman said that once a city falls behind that curve, there is no way to catch up.

Huntsman said he considers himself a public servant and not a politician. He believes governors have more of an impact on the country than the president.

Huntsman encourages young people to contribute to the community, get involved in what’s going on, and take ownership of what they believe in.

Student Body President Taylor Godfrey, a senior population health major from Buckeye, Arizona said, “We have the opportunity to be involved and have our voices heard through our vote and I think it’s really important that we are registering and getting educated to vote so that we can make a difference.”