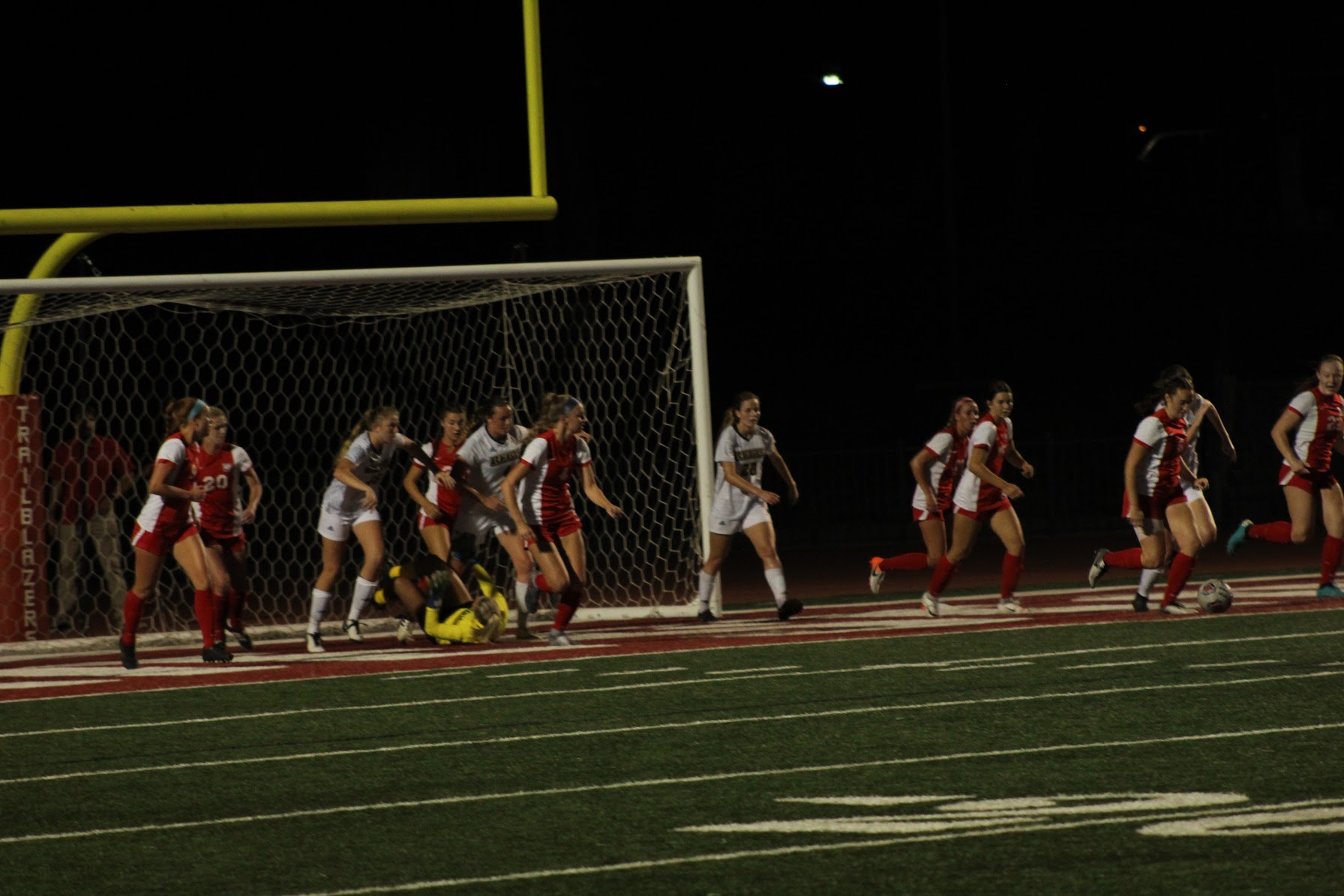 Both teams go in for the rush kick to gain field. DSU and MSU Denver game went into double overtime. Photo by Madison Boyd

The Dixie State University women’s soccer team faced a tough blow on Nov. 8 as they were defeated by Metropolitan State University of Denver in the quarterfinal round of the Rocky Mountain Athletic Conference Women’s Soccer Tournament.

Midfielder Alexa Ashton, a redshirt senior elementary education major from St. George, said she felt the emotions of frustration and sadness after the game.

Ashton said: “I know what our team is capable of and I felt like we could’ve performed better as a team than we did. However, I do know that all the girls tried their best and I think that’s what eventually made me almost okay with [the loss]. Just being like you know what, I worked really hard for the team and they worked hard for me.”

The Roadrunners scored within the first five minutes of the game as they got ahead to a 1-0 lead. However, the Trailblazers made the score even in the 31st minute of the first half with a goal by Ashton with the assist from defender Kilee Allsop, a redshirt senior business administration major from Smithfield.

Both DSU and MSU Denver were locked in a stalemate, and the game went into double overtime. After there was still no winner by the end of the second overtime, it came down to penalty kicks to determine the winner. The Trailblazers and the Roadrunners made the first three penalty kicks and both teams missed their penalty kicks in their fourth attempt. MSU Denver made their fifth penalty kick attempt count and they scored.

It was up to forward Whitley Johns, a redshirt sophomore general studies major from Gilbert, Arizona, to keep the DSU women’s soccer teams hopes alive. Johns missed the fifth penalty kick attempt and the Roadrunners won the penalty kick battler 4-3.

After the penalty kick shootout, head coach Steve Golas told his team that he’s proud of what they accomplished this season, their growth, competitive nature and work rate. Additionally, Golas said the weird thing he’s most pleased with is afterwards, seeing the bitter disappointment and that is something that is radically changed.

Golas said: “There is an expectation of themselves that is so awesome to see. I’m so proud of them for that; it’s a real hurt. They knew they were the better team, but they didn’t execute in those final moments. I thought we played hard, we gave everything that we had, but in that final moment. That’s the evolution of it and that’s something I’m proud for again that they’re growing to that expectation is there. That want, that desire to finish things out.”

“They knew they were the better team, but they didn’t execute in those final moments.”

Allsop said what she’s most proud of from this season was how the soccer team came together, overcoming their differences and working hard.

“I feel like we performed well towards the end of the season,” said Allsop. “From the start where we were able to figure out the different kinks and being able to play the game that we wanted to.”

Now the women’s soccer team has to wait until next week to see if they receive a bid to go to regionals. Golas said he is not quite yet ready for the season to end.

“We’re hoping that we’re blessed and fortunate enough to get in next Monday to find out if we are in a regional because I will say I wouldn’t want to play us,” said Golas.

More information will be posted as it becomes available.