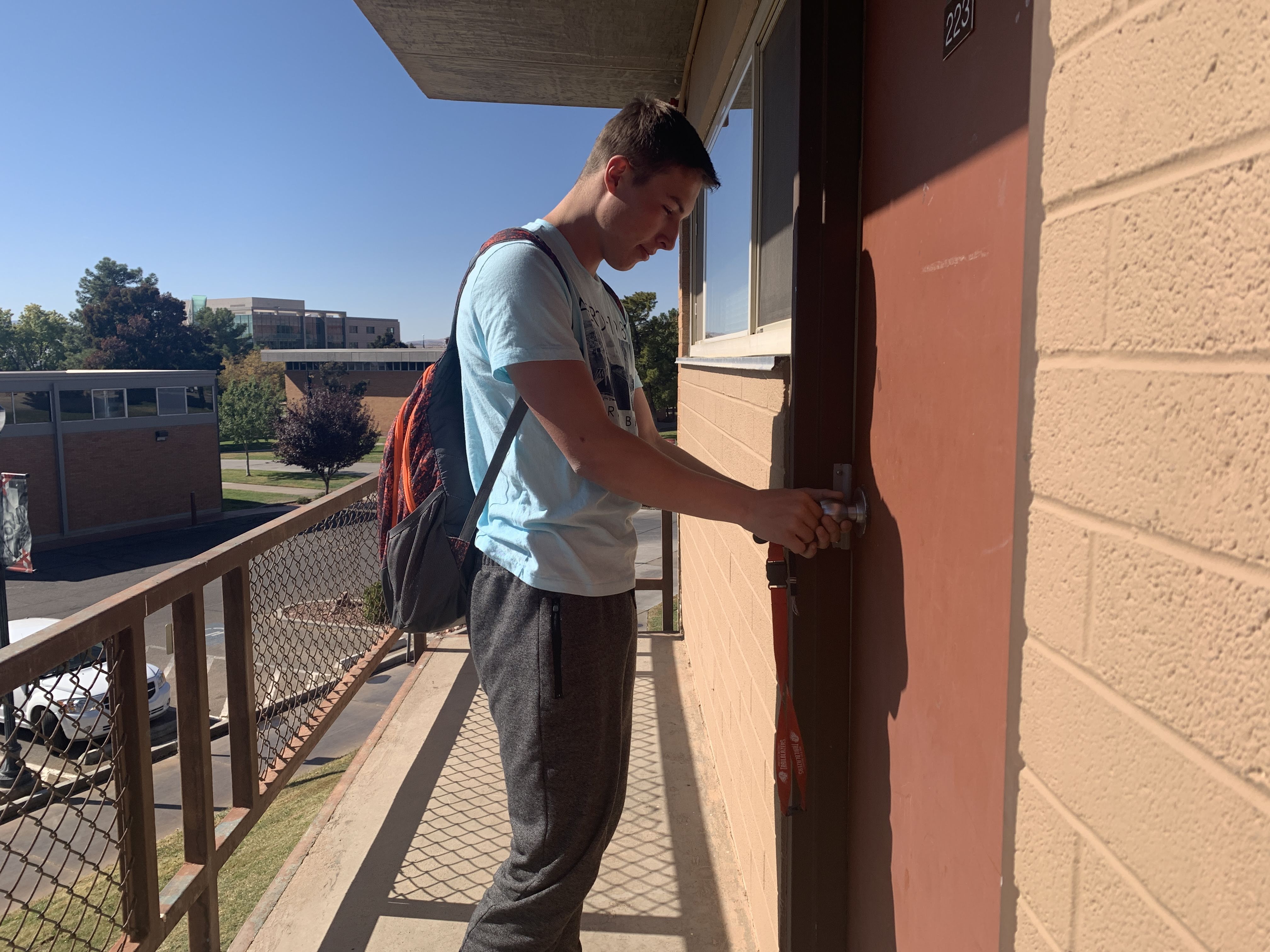 Quade Saxton, a freshman communication studies major from Pinedale, Wyoming locks his dorm room door at Shiloh Hall. Saxton is a current resident at Shiloh Hall, and was surprised to hear about the change coming. Photo by Madison Boyd.

Students living at Shiloh Hall are on a time crunch to find a new place to live before their current dorms get demolished.

Shiloh Hall is turning into Campus View Suites Phase II, and it is happening a lot sooner than planned.

Originally, the construction was not supposed to start until May 2021, when all of the students in Shiloh Hall would be moving out. These plans changed last month when construction worker directors decided that the original timeline for the demolition of Shiloh Hall wasn’t going to be an adequate amount of time to have the new building ready by fall 2021, said Seth Gubler, director of resident life.

“So essentially, the building is coming down,” Gubler said. “We want to build a new building that will accommodate at least 500 students and in order to start construction, we would have to tear down Shiloh, because that’s where the building will be.”

According to an article by the Dixie Sun News, “The university has its largest student body to date with a total of 11,194 students; this is a 12.49% increase from last year.”

In order to accommodate for this influx of students, DSU is starting construction early to give the new incoming students a place to live, Gubler said.

Students currently living at Shiloh Hall have three options that are being presented to them from DSU for the spring 2020 semester, Gubler said.

The last two options listed are significant discounts compared to what the average resident would pay at both of those student housing options. Shiloh Hall is also the oldest dormitory on campus, which excluded students from having kitchens, living rooms, washers, dryers and other amenities in their living spaces, Gubler said.

“All of these options are significantly better than the place they are living now,” said Sherry Ruesch, executive director of facilities management.

This was a necessary decision and the student residents understand that, Ruesch said.

This decision for early construction will affect up to 46 students, Gubler said.

Gubler said students at Shiloh Hall are excited for the new building because they have felt like their dorms are lacking necessities like kitchens, washers and dryers. The only complaint that was brought to Gubler’s attention was one student’s complaint who was upset about not living close to campus and having to deal with more roommates at the other housing options.

“We’ve gone to great lengths to make sure these students are taken care of,” said Paul Morris, vice president of administrative affairs.