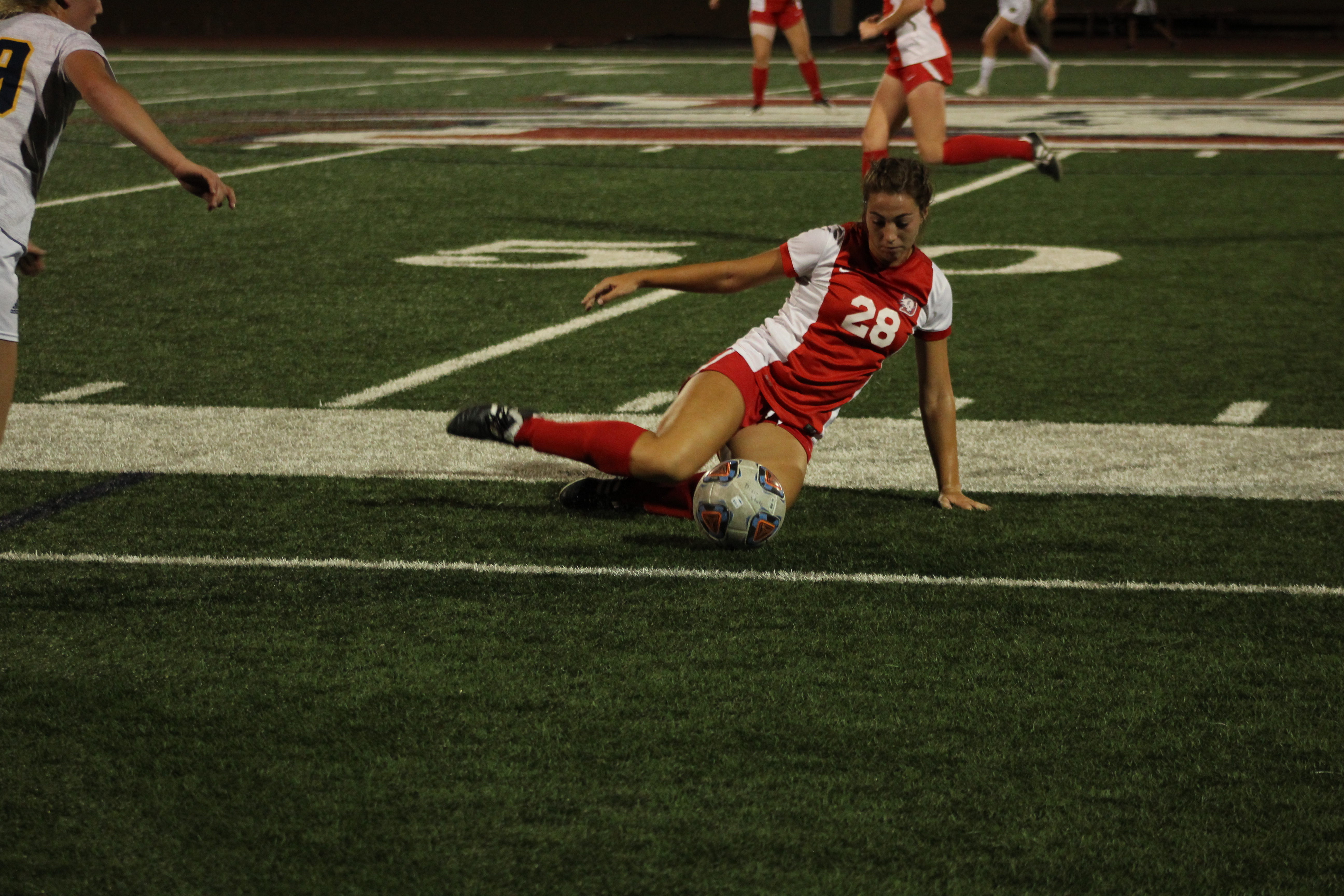 Ashlyn Vantuessnbroek, a sophomore sports science major from Salt Lake City, goes in for a corner kick. The Trailblazers will play BHSU on Sunday at noon at Trailblazer Stadium to finish off their weekend homestand. Photo by Madison Boyd.

The Dixie State University women’s soccer team is preparing for its first Rocky Mountain Athletic Conference road trip after shutting out Black Hills State University on Sunday, despite losing the starting goalkeeper to an injury on Friday.

According to DSU Athletics, the Trailblazers outshot the Yellow Jackets 29-2, with forward Tess Donaldson, a sophomore general studies major from Orem, making the first goal of the game. The DSU goalkeepers didn’t have to attempt any saves as BHSU finished with only two shots. DSU defeated BHSU with a final score of 4-0.

On Sept. 27, goalkeeper Chandler Greenwood, a sophomore criminal justice major from Port Orchard, Washington, blocked a corner kick attempted by Regis University and went down with a knee injury in the 42’ minute of the first half.

Greenwood was out for the rest of the game and goalkeeper Adelle Brown, a junior recreation and sports management major from Fallon, Nevada, took her place.

Brown rose up to the challenge and ended up with three important saves from the game.

Head coach Steve Golas said: “Literally the second she stepped on the field she had to make a big save. She got the paw out there and it’s like she can breathe now. You saw the confidence in the second half and [Regis] had opportunities on the goal and [Brown] gets her hands to it. She had her moment and when the bell rang, she answered.”

DSU was up 1-0 in the first half thanks to forward Whitley Johns, a sophomore general studies major from Gilbert, Arizona, who scored her third goal of the season.

The Trailblazers tacked on one more goal kicked in by midfielder Kelsey Cook, a junior business administration major from American Fork. DSU defeated Regis by a final score of 2-0.

Cook thought that Greenwood’s presence was definitely missed on the field.

Cook said: “It was hard to see [Greenwood] go down like that because she is our starting keeper and she does have a presence back there. We got some depth in our goalkeeping position and they all work really hard at practice. They all come out every day to prove themselves so we know that we can be confident in whoever is in goal back there.”

Golas said he is confident in every goalkeeper on the roster.

“We’ve had a lot of competition throughout the year in goalkeeping so it’s going to be who’s going to step up and who’s trying to own that position,” Golas. “We have confidence in every one of our goalkeepers. We have five on the roster and it’s not because we don’t know who our one is, it’s because we’re that good.”

The women’s soccer team will have their next set of games on the road against MSU Denver on Oct. 4 and UCCS on Oct. 6.