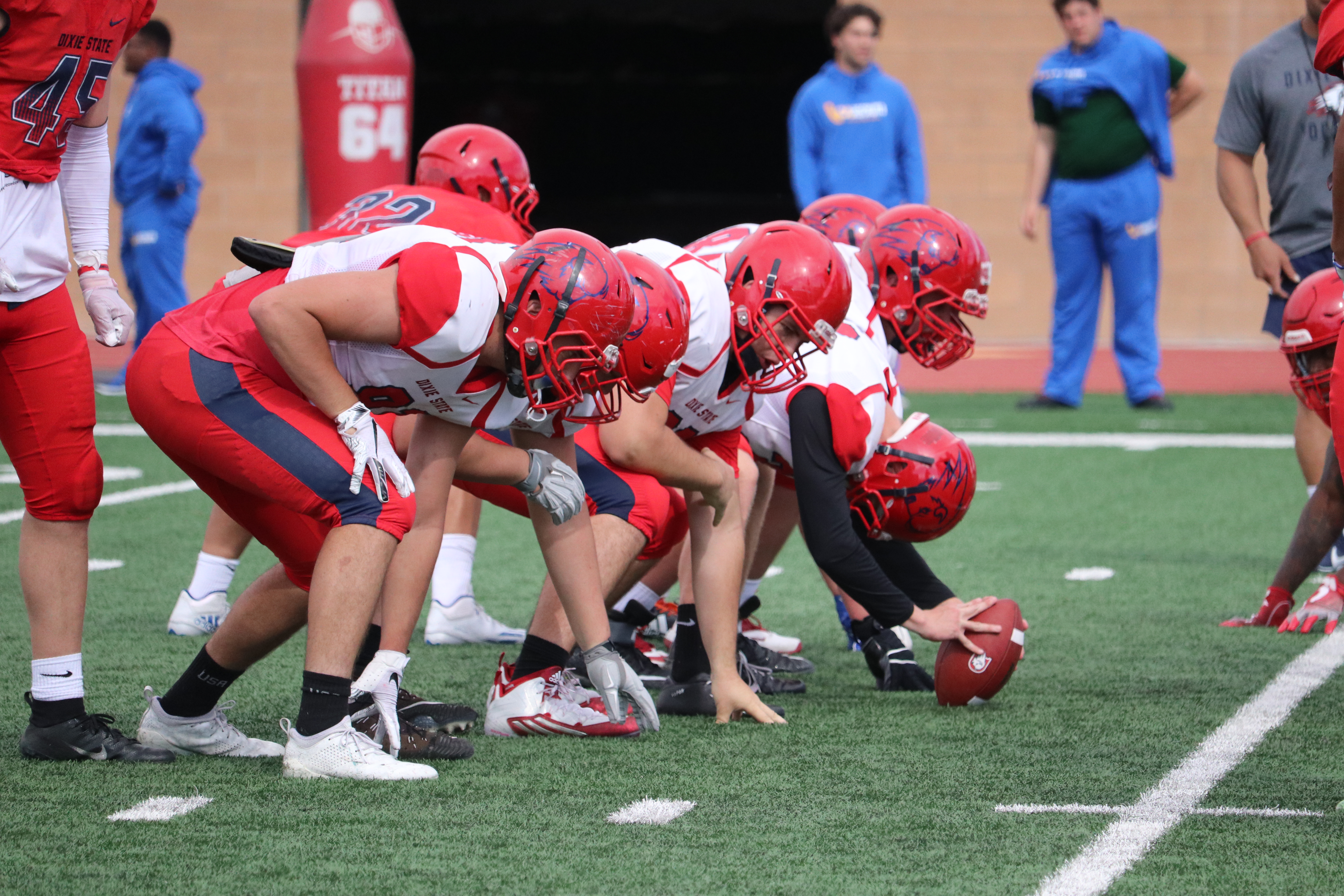 Dixie State’s football team lines up a scrimmage during practice at the Trailbalzer Stadium on April 4th, 2019. The Trailblazers have their annual spring game April 13th at 1 p.m. at Trailblazer Stadium. File photo by Madison Anderson.

The Dixie State University football team is coming off a record-breaking win going into their next game against South Dakota Mines.

The Trailblazers defeated New Mexico Highlands by a final score of 55-0; the first shutout in DSU’s 14-year NCAA era and largest margin of victory in program history, according to DSU Athletics.

SDM is coming into the matchup against DSU with a 1-2 record, defeating Simon Frasier by a final score of 26-7. SDM posted 380 yards of total offense, and defense had four sacks and two interceptions.

Despite the DSU football team having their third road game in a row coming up against SDM, head coach Paul Peterson said the team needs to travel well, stay focused and stay fresh to succeed in defeating SDM this week.

Peterson said: “It’s about us every week – the offense and defense. It’s about getting better, fine-tuning those details and whoever the opponent is we’ll have the game plan in.”

DSU Trailblazer’s defense had the spotlight throughout the NMHU game. The defense held the NMHU offense to 80 yards rushing and 33 yards passing for a total of 113 yards of total offense, according to DSU Athletics. The Trailblazers also tacked on four interceptions with senior defensive back Aaron Simpson, a media studies major from Pasadena, California, making two of them and taking one of them to the house for a touchdown.

“Shoutout to the defensive line; they made [the interception] possible,” said Simpson. “Without coach Mike Smith and coach Tyler Almond teaching me technique, I wouldn’t have [taken the interception back for a touchdown.]”

The DSU offense didn’t miss a beat since their game against Fort Lewis. The offense had success running the ball against NMHU putting up 269 rushing yards and three rushing touchdowns. There were 147 yards through the air with one passing touchdown for a total of 416 yards of total offense, according to DSU Athletics. Senior running back Sei-J Lauago, a criminal justice major from Paramount, California, had one of the three rushing touchdowns for DSU, marking his first touchdown of the 2019 season.

“[The offense] commits every week to establish the running game and the [offensive line] coach emphasizes on them and everyone else on offense,” said Lauago.

DSU special teams also got in on the action with a blocked punt by senior running back Conner Miller, a communication major from Santa Ana, California. The loose ball was then picked up by sophomore defensive back Simote Lokotui, a communication major from South Jordan, and returned for a touchdown. This was the first blocked punt returned for a touchdown in the program’s history.

The DSU football team will end their three-game road trip after facing off at SDM on Sept. 28 at 6 p.m.