DSU, 10 DSU faculty being sued for termination of professor 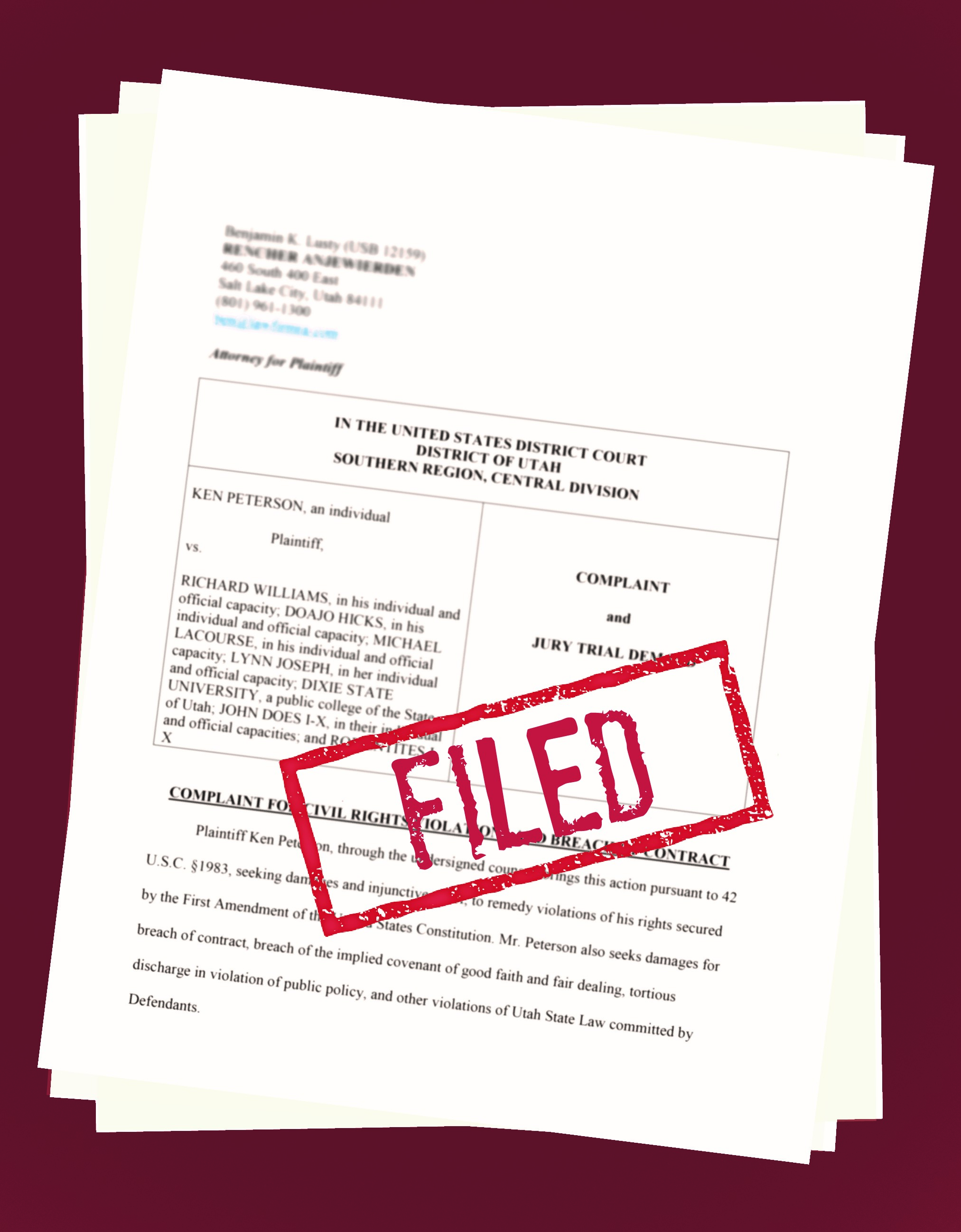 Another former Dixie State University professor has officially filed a federal civil lawsuit against the university which relates to events beginning around 2015.

The federal complaint was filed by former tenured music professor Ken Peterson on Aug. 19, a little over a year after his initial dismissal in March of 2018. His termination, as well as the disciplinary actions put on his coworker and assistant professor of music, Glenn Webb, was the cause of contentious situations across campus including a protest, a last chance agreement letter, and a faculty call to action.

According to the official complaint, Peterson is filing on the claims of “breach of contract, breach of the implied covenant of good faith and fair dealing, tortious discharge in violation of public policy, and other violations of Utah State Law committed by Defendants,” as well as compromise of his First Amendment rights.

Peterson’s complaint chronologically describes the events that ultimately led to his termination and his eventual lawsuit, including disagreements about former theater professor Varlo Davenport’s dismissal, disputes between him and the former chair of the theater department, Mark Houser, and a Last Chance Agreement that Peterson has called “punitive, vindictive, disenfranchising and dehumanizing.” Peterson also argues DSU did not follow Policy 371 throughout his firing process.

Policy 371, or the faculty termination policy, outlines the process that should be followed in the case of faculty dismissals. Since Peterson was a tenured professor, a faculty review board was assembled to weigh in on whether Peterson should be reinstated.

After deliberation and a court-like hearing from both parties, the board recommended to President Richard “Biff” Williams that Peterson be reinstated after a two-week suspension.

According to section 4.5 of policy 371, the president has three options after receiving this recommendation: accept the decision of the board, hold further proceedings and get a second opinion, or reject the board’s decision.

In Peterson’s case, Williams recused himself from the decision since he was involved in the case and sent it to Elizabeth Hitch, associate commissioner for academic and student affairs for Utah System of Higher Education. Hitch determined Peterson should be reinstated with a last chance agreement document, which Peterson refused to sign due to fears of First Amendment infringements.

The LCA listed 28 points that Peterson would have had to sign in order to be reinstated and included things such as not posting “unfounded or untruthful derogatory statements” toward the university on social media.

According to the official statement of the university: “Dixie State University is committed to expanding opportunity, to excellence, and to creating the diverse community essential to fulfilling its mission of higher education. In the matter regarding Dr. Peterson, Dixie State followed standard personnel policies and procedures which provided Dr. Peterson the opportunity to return to his professorship on campus. While this matter is in active litigation, the University will refer all inquiries to the Utah Office of the Attorney General.”

Peterson is specifically filing against Williams, General Council Doajo Hicks, Provost Michael Lacourse, DSU Investigator Lynn Joseph, DSU as an institution, and 10 others whose names are not listed.

All DSU employees named in the lawsuit declined to comment.

The amount Peterson is seeking in this lawsuit is not stated in the original complaint. According to the complaint, “Peterson has suffered in an amount to be proven at trial.”

Both Peterson and his lawyer, Benjamin Lusty, declined to comment.

A look to the future

Davenport, who is currently suing DSU for around $22 million, said things were hard after being terminated from the university, especially when it came to finding new work.

“After I was terminated I applied for university teaching positions all around the country and was invited to interview several times, but it never went any farther than that,” Davenport said. “I was finally hired as a car salesman in St. George, and with a great deal of help from family and friends we were able to limp along for a while.”

Davenport is now working for the Salt Lake School for Performing Arts.

“It took time,” Davenport said. “There were some board members who were very reluctant to hire me based on what they read online, but the principal, Ron Literal, took my ‘not guilty’ verdict at face value and went to bat for me.”

Davenport said he suspects this will be a long process and that his case is to be scheduled soon.

“Simply put, I would sum up my experience with the current administration at DSU as an ongoing interaction with a group of people committed to self-preservation through mendacity,” Davenport said.

Peterson said he is currently keeping busy with the Southern Utah Heritage Choir, piano work, his family and a book project he said he has been working on for a very long time.