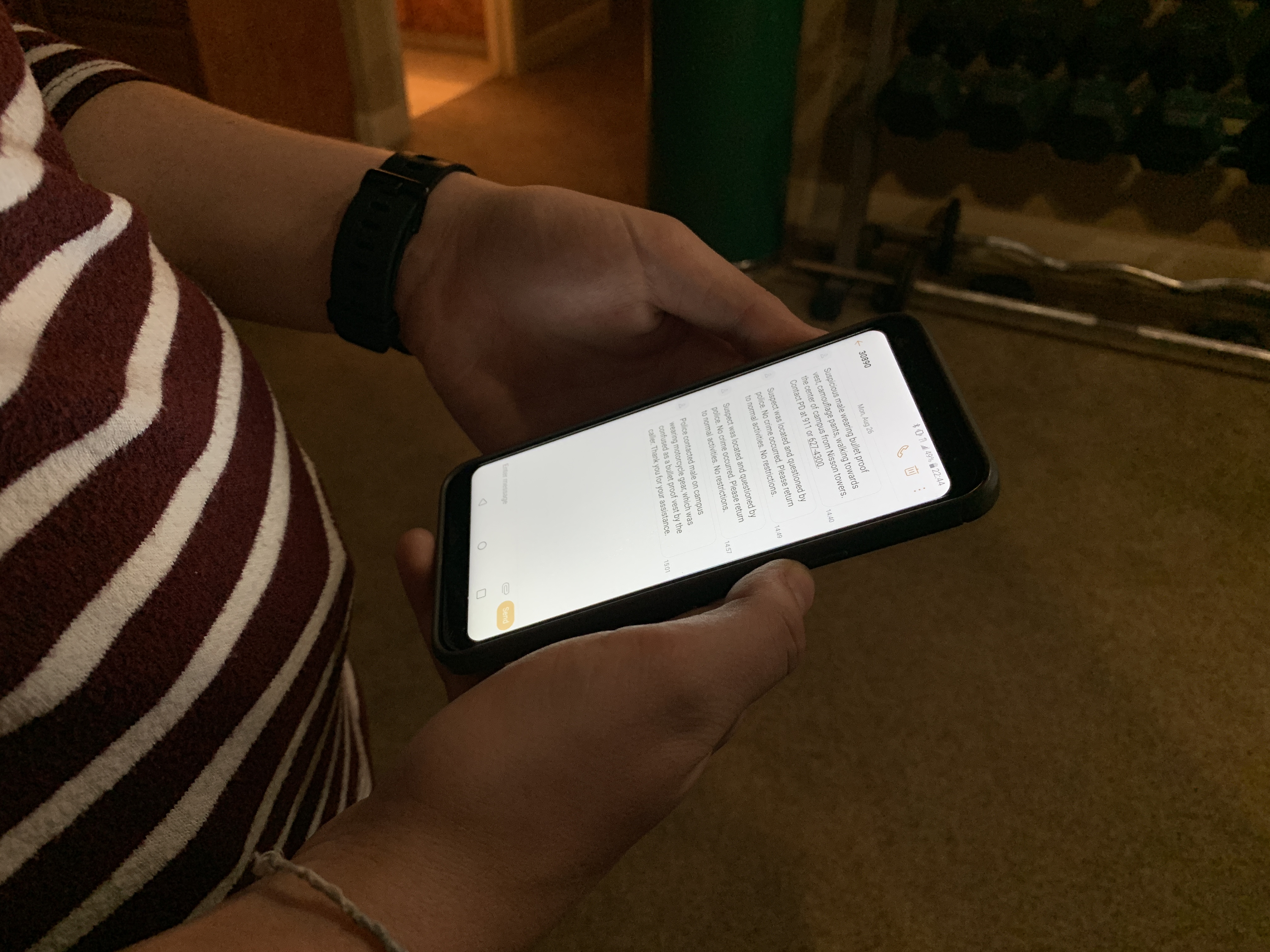 Morgan Beddow, a freshman business major from Kearns, recalls the texts she received from Dixie State University concerning the suspicious activity that occurred on campus. A campus alert was sent informing students of a suspicious male walking toward the center of campus from Nisson Towers. Photo by Madison Boyd.

I was alone in the newsroom when I received a campus alert about a suspicious man wearing a bulletproof vest nearby. I didn’t get the notification that it was a false alarm until an hour later.

A campus alert was sent informing students of a “suspicious male wearing [a] bullet proof vest [and] camouflage pants” walking toward the center of campus from Nisson Towers. Further messages stated that the suspect was located and questioned by the police, who found that no crime had occurred. Specifically, the man had been wearing motorcycle gear, which was confused as a bulletproof vest by the person who had called the police.

Posts on Dixie State University’s social media an hour later confirmed that the situation was a false alarm. During that hour, students and faculty braced themselves for the worst.

“We pushed tables against the door and waited,” English professor Stephen Armstrong said. “No chance to run. We were ready to fight.”

Mark LaVoie, an assistant professor of media studies, said he had his students hide in the corner of his classroom until he confirmed with police that it was safe to resume normal activities.

DSU’s public information release about the incident said a resident adviser noticed a suspicious man wearing camouflage pants and what appeared to be a bulletproof vest just after 2 p.m. The resident adviser called dispatch at 2:13 p.m., with St. George police arriving 10 minutes later to assist campus police. Campus alerts were sent out starting at 2:31 p.m., and police had located the suspicious man at 2:40 p.m. at the Kenneth N. Gardner Student Center and quickly determined the man was wearing a motorcycle vest and wasn’t a threat.

There were roughly 10 minutes between the alerts and the determination that the man wasn’t a threat, but it took an hour for some students to be notified of the false alarm.

“Many people received multiple notifications of each specific message sent through phone, text, email and the notification system on campus, causing some to complain about too many notifications being received,” said Blair Barfuss, chief of campus police. “We try really hard to be very aware of our use of the campus alerts system, and believed the need to inform outweighed the possible inconvenience of over notification.”

Barfuss said he recommends that the community sign up for campus alerts at https://safety.dixie.edu/emergency/dixie-alert-system/ and use the page to educate themselves about how the system works.