Football prepares for fourth and final season in the RMAC 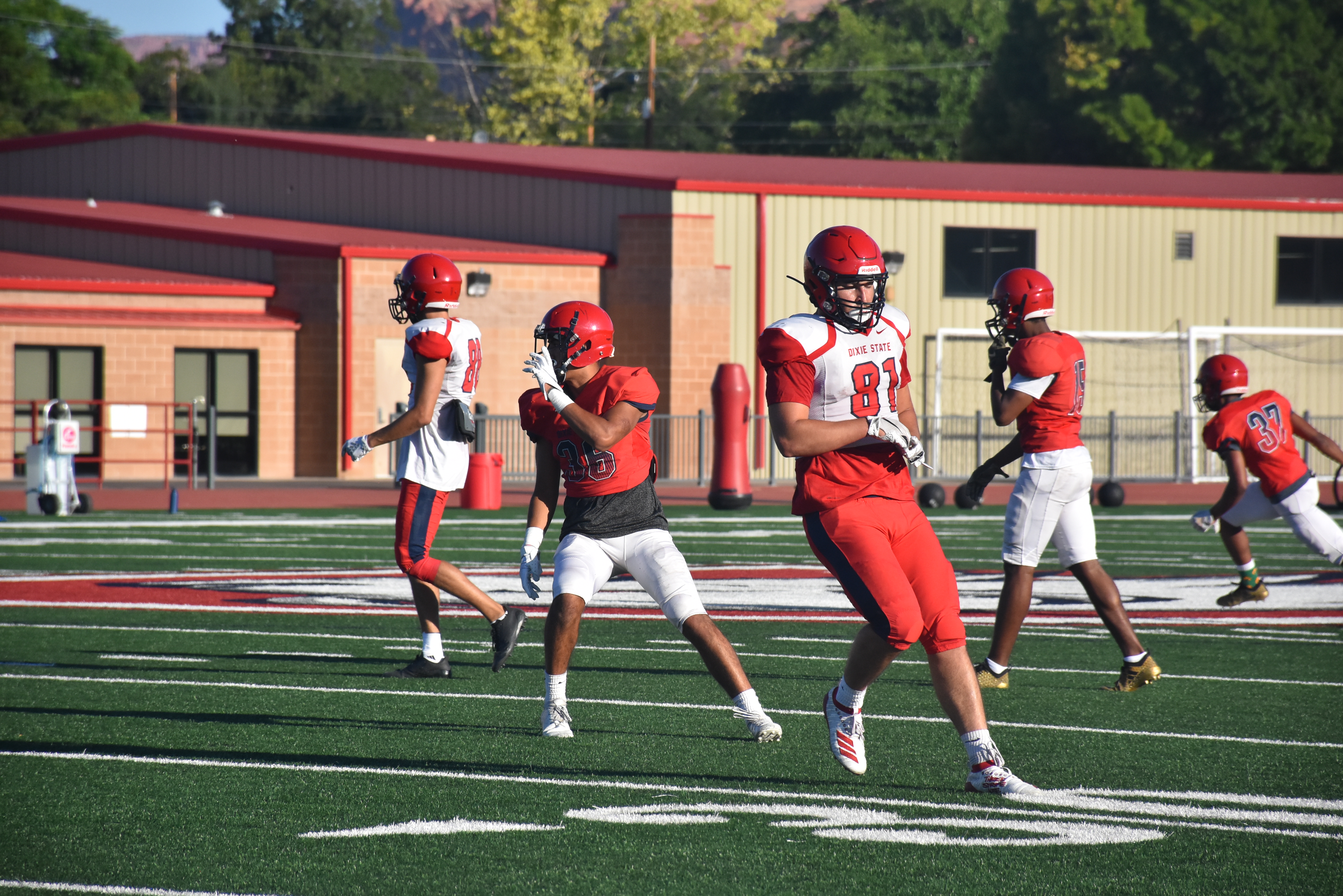 The Dixie State Trailblazers football team practices drills during practice at Trailblazer Stadium. They are preparing for their first game on Saturday, Sept. 7, 2019. Photo by Cortney Graf.

The start of Dixie State University football is right around the corner as we approach the 2019 season.

Last season, the DSU football team finished 7-4 overall and 7-3 in the Rocky Mountain Athletic Conference. With new Dixie State head coach Paul Peterson, there is a lot to look forward to this season.

“We got great intensity out there, good competition, some good additions to the team that helped out the guys that have already been a part of this team and a part of the conference and so I think these guys are rearing up and ready to go,” Peterson said.

Peterson said the team hasn’t lost a beat since spring practice and his main goal to achieve during fall practice is understanding assignments and competing with one another to get ready for game day.

According to DSU Athletics, last season the team put up 31 points per game, had 1,486 rushing yards, 3,558 passing yards and 46 total touchdowns. In Division II rankings, the DSU football team were ranked No. 5 in passing offense and No. 17 in total offense, according to the NCAA.

Kasey Allison, a senior criminal justice major and wide receiver from Las Vegas, said the offense has been gelling together well through fall camp.

“It always brings the best out of you and that’s the main goal of fall camp is to go out there and compete at the highest level and get better each day,” Allison said.

Nathen Aceves, a sophomore recreation and sport management major and offensive lineman from Glendora, California, said that repetition on the offense helps him better understand what to do on assignments. Aceves played in every game and started in 10 last season as a freshman.

“Our mentality we’ve always had is just be a dog on the offensive line and try to do our job to the best of our ability,” Aceves said.

As for defense, DSU had 753 tackles, 99 tackles for loss, 39 sacks, 10 interceptions and 15 forced fumbles on defense. The DSU football team was also ranked No. 6 in team sacks and ranked No. 9 in team tackles for loss in Division II rankings.

Alex Lilliard, a senior recreation and sports management major and defensive back from San Diego, said practices are well organized, and the new coaching staff does a great job at preparing the team to be game day ready.

Lilliard said: “We gotta win this year. Pueblo, Mines, those teams are nothing to look over. The goal is the RMAC championship, then the national championship. That’s what I want the focus to be.”

DSU’s first football game will be at Trailblazer Stadium on Saturday, Sept. 7 at 7 p.m. against Colorado State-Pueblo. This will be the Trailblazers’ final season in the Rocky Mountain Athletic Conference before transitioning to Division I in the Football Championship Subdivision Independents.