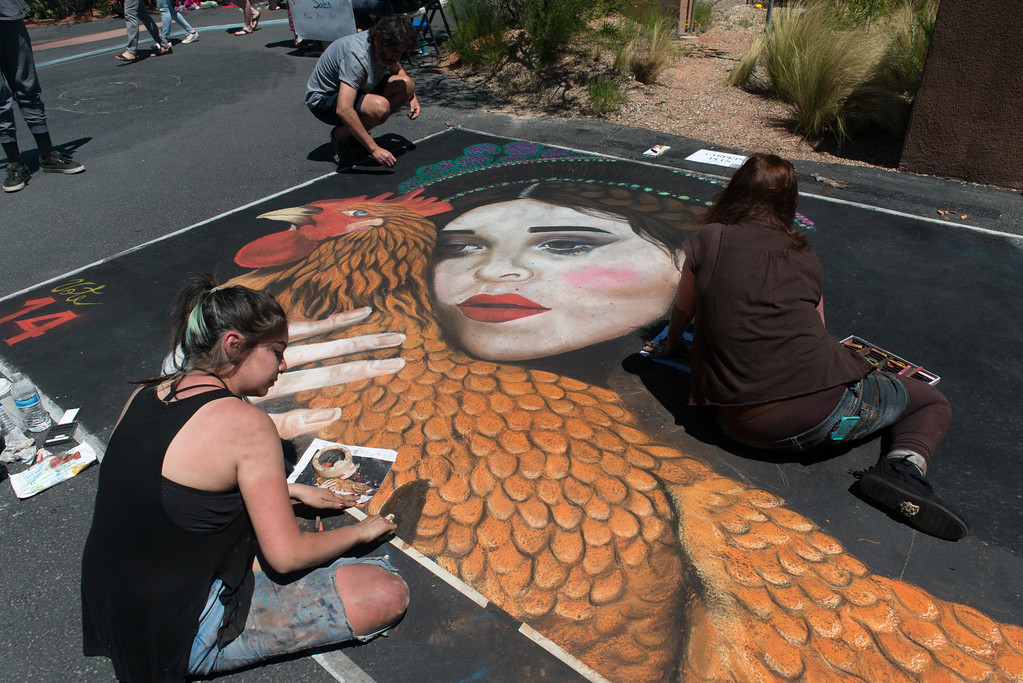 “So much talent is living among us,” said Merrie Campbell-Lee, a representative from the Center for the Arts at Kayenta.

This talent will be at the upcoming Kayenta Street Painting Festival April 27-28. At the festival, which has been an annual occurrence since 2012, 10-15 professional artists use chalk to create masterpieces alongside the public and local school teams.

“The schools participate on Saturday only and their work is done by 3 p.m., and their art is judged by a local artist or artists; this year it’s Georgia Johnson,” festival committee member Judith Kapuscinski said. “It’s fun to come just to see the students because they’re a piece of art at the end of the day; they’re covered in chalk.”

Kapuscinski said there is also a children’s mosaic for the public, which consists of children paying $5 for chalk and a two-by-two square where they can create art that becomes part of a mosaic by the end of the event.

“There’s some real up and coming talent there too,” festival committee member Susan Holben said. “By the end of the day Sunday, it’s a joy to walk through the [Kayenta Art] Village.”

The professional artists participate by applying after a call for art is made by the committee and are not charged a fee to participate, though the food vendors are, which is how the festival manages to “scrape by,” Kapuscinski said. She also said there is no theme to the art this year.

“We’ve had themes and we’ve not had themes, and I don’t know what will happen in the future, but this year we chose no theme,” Kapuscinksi said.

Holben said the professional artists are competing for two awards, a“Best of Show” category based on judges’ decisions and a “People’s Choice Award” voted on by the public.

There will be live music from bands such as So What? and Crossroads from noon to 3 p.m. each day. Kapuscinski said the committee encourages dancing during the performances. There will also be several food vendors available at the event both days.

Kapuscinski said the most interesting piece of art she’s seen at the festival has been the gila monster painted in 2015.

“The gila monster blew me away because Anat [Ronen] showed up on Friday afternoon and with the chalk she just sort of outlined [it], and by Saturday afternoon it was completely done,” Kapuscinski said.

While Dixie State University students can’t currently compete in the festival, they are encouraged to participate as part of the public.