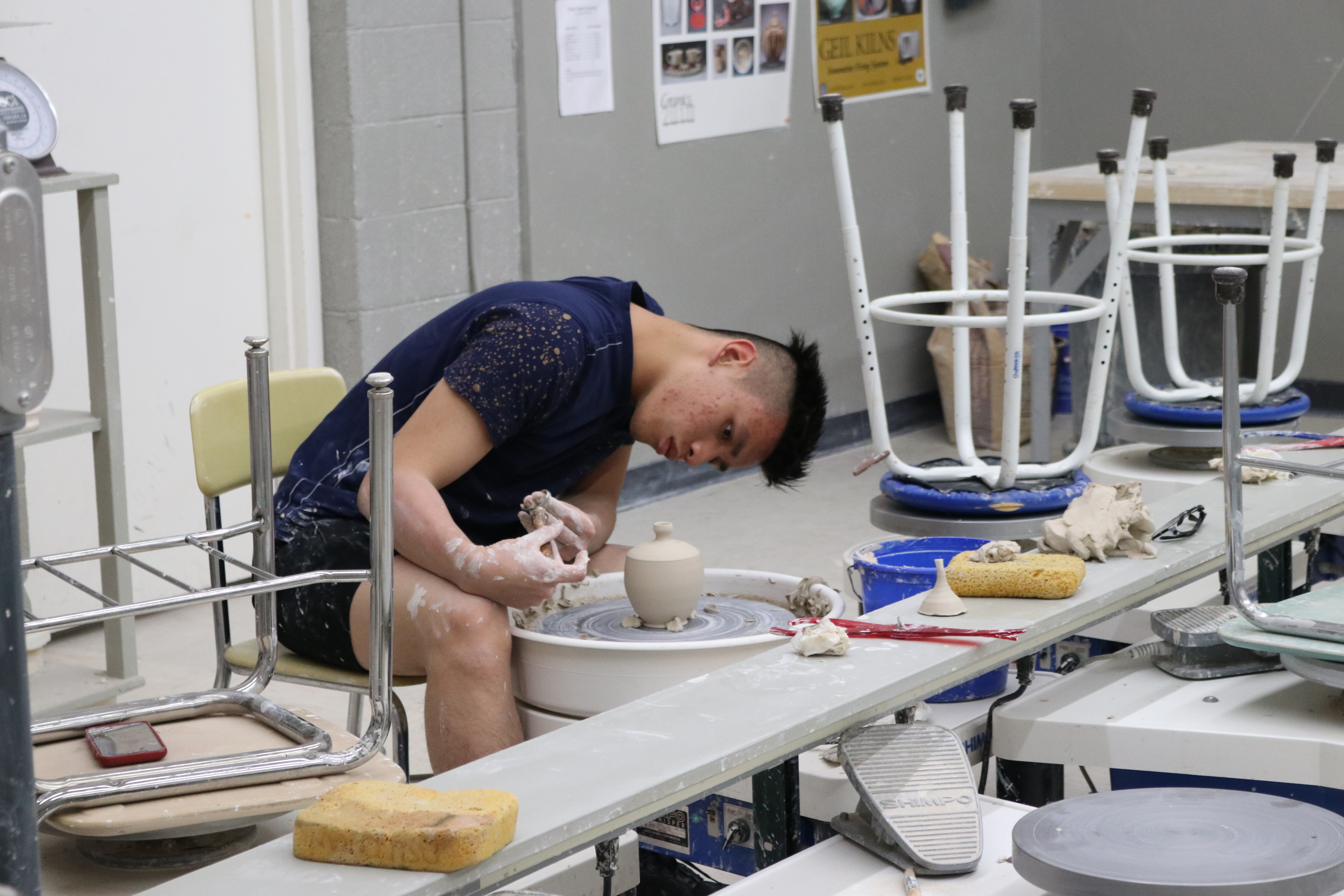 Dixie State University ceramics students have found their second home in the art department, finding themselves spending hours working on their creations until they are perfect.

Elliott Hong, a sophomore art major from Saigon, Vietnam, is one of those students. He found his passion a year ago in a beginning ceramics class.

Hong is considered one of the most advanced students who has worked their way to the top, but he doesn’t let it get to his head, his fellow classmates said. It wasn’t an easy start, but he was determined and he never stops trying, Hong said.

“I hated ceramics at first because I feel like I cannot do anything, but when it starts clicking it’s like a whole new world of possibilities,” Hong said. “Sounds corny, but you can make anything man; like, we don’t restrict a certain line of work because it looks obscene or anything.”

Hong said his inspiration lies along fluidity, feminine form and basic functional pottery. But what starts the creative spark in his mind is finding other artists through Instagram.

“I resonate with what I feel is attractive, and then I try to emulate them and make it my own,” Hong said.

Before Hong found ceramics, he said he had been sculpting for a while as well as doing other forms of art work such as watercolor and illustration graphics. But none of them gave the same feeling of excitement and creativity as ceramics had, Hong said.

Others in the art department have noticed how fast and far Hong has come with his ceramics skills just from last year.

“Whenever I’m in here Elliott is in here,” said Jill Bennett, a sophomore art major from Salt Lake City. “He has just worked so hard and has really just become an advanced student really fast, so he had to be in here a lot of hours.”

Many of his professors and other art professors have grown very close to Hong and are amazed by what he brings to the table for his own art work as well as helping others.

“Hong is very passionate; he’s a ball of energy,” said Glen Blakley, a professor of art. “He’s always kind of here in the art department when he’s not in other classes, or when he’s not in his apartment cooking food for other students.”

Alumna Anna Oakden graduated from DSU in 2013 with her bachelor’s in ceramics. Hong said she is the “ceramics mom,” a figure in the art department that he and many other students have felt comfortable going to for help and critiques.

“Pretty nice, pretty intense, vibrant personality,” Oakden said. “We kind of have a group, we kind of just share information, it’s a really loose kind of group with lots of different types of personalities.”

Hong said he hasn’t decided on a minor yet, but he said education is a possibility; he wants to be a ceramics teacher one day and can see himself doing this for the rest of his life.