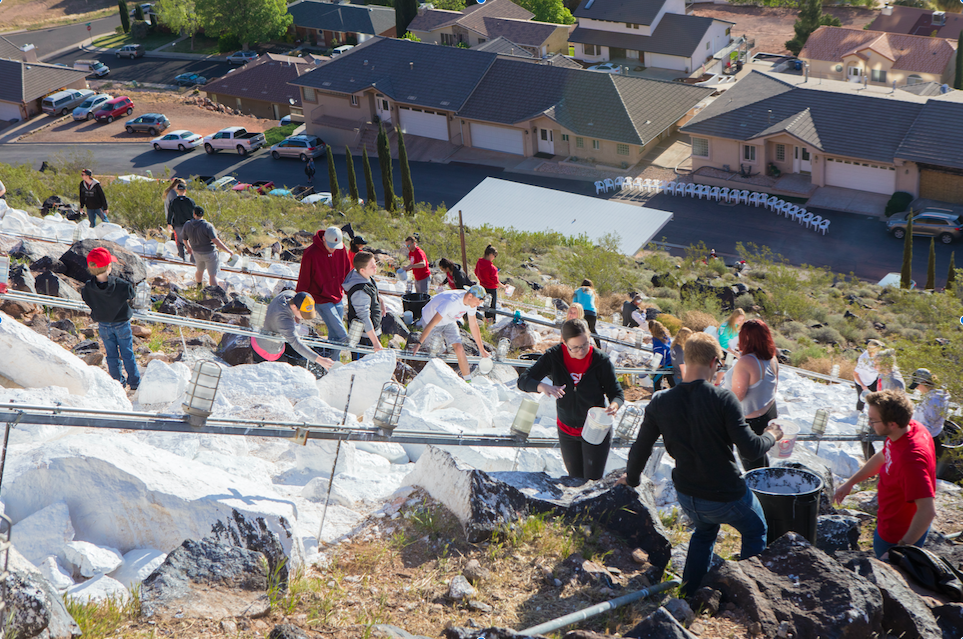 Students participate in whitewashing the "D" on the Black Hill during D-Week 2018. This year, the week-long celebration of Dixie State University begins during the second week in April. Photo courtesy of UMAC.

When the spring semester ends, Dixie State University celebrates with D-week, but there is more to the festivities than events like the Great Race or the D-Queen Pageant.

According to a university news article from March 2018, D-Week is a century-old tradition that marks the end of spring semester. It is like homecoming week but has its own set of activities, some of which are a tradition themselves.

One of these time-honored traditions is whitewashing the “D,” the landmark letter overlooking St. George.

“I think there’s a lot of reasons [D-week] is so important,” Luke Kerouac, director of student involvement and leadership said. “It gives the students something to tie to the university, to feel a part of, to feel ownership for.”

Kerouac said many of the events like D-Queen and Brooks’ Birthday Party have become a tradition since being added to D-Week in recent years. He said D-Queen has been an event for close to two decades and breaking a world record has only been a part of D-Week for nearly 10 years.

Brook Sullivan, alumni association events and marketing coordinator, said their involvement with D-Week is about tradition and ensuring the Dixie Spirit is alive. She said the Alumni Association has alumni who are involved with both homecoming and D-Week and want to share their love of DSU with friends, family and current students.

“Before the D-Queen pageant, we get together — the past D-Queens — for a social and then they usually get recognized as well at the pageant,” Sullivan said.

“We’re on the same page now with student government as far as what’s expected of us,” Hildebrandt said. “[What] we’ve put a lot of effort into is to make all the frills around the race as best as we can, where we weren’t even planning for that last year. We just thought we’d just put on the race.”

Sullivan said the activities are a good way to relieve stress and have fun at a stressful time in the semester by meeting up with friends.

“I believe when students engage with the activities during D-week and homecoming week they enhance their experience while at school,” Sullivan said.

D-Week officially kicks off on April 8 with free food and Brooks Birthday. Whitewashing the “D,” the evening banquet and D-week dance close the week of festivities on April 13.

More information about the events of D-week and when they happen is available on the campus website.

D-week will be a week of fun, excitement, celebration and memory building as we say farewell to Spring semester and celebrate being Trailblazers.