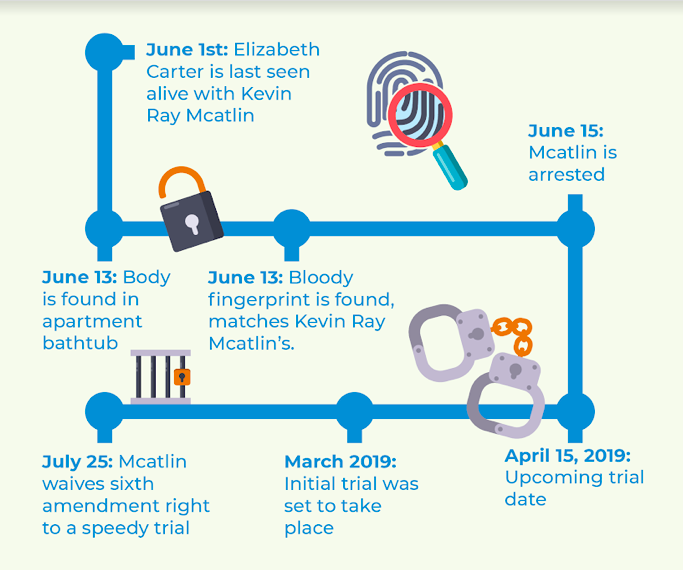 The trial for a suspected murderer of a former Dixie State University student has been pushed back one month due to overscheduling in the court. Nearly 10 months after her unfortunate death, friends of the victim are continuing to honor her memory and remember her as the trial draws near.

Kevin Mcatlin has been charged with the murder of 33-year-old Elizabeth Carter, which took place in June 2018.

Mcatlin was suspected after detectives found a bloody fingerprint at the scene matching Mcatlin’s. He was later apprehended in Moab, before being transferred to Washington County.

Mcatlin waived his Sixth Amendment right to a speedy trial due to the need to prepare for the trial, Flint said. This involved hiring investigators to look into witness statements and do background checks.

The trial, originally set to take place mid-March, has been rescheduled to April 15 due to an automobile homicide case set to take place the same day. As the automobile case was older, the suspect had been in jail longer and the case didn’t settle, so they had to try that case first, said defense attorney Edward Flint.

Carter was found by two employees of Jensen Property Management in the bathtub of her apartment located on Bluff Street, according to a probable cause statement filed in the case.

These two employees were carrying out a follow-up inspection to Carter’s apartment. When no one responded, they enlisted the help of a locksmith to unlock the door for them. When they arrived inside, they found the body in the bathroom covered in various cushions and blankets. Autopsy reports revealed that her throat had been slit, there were 17 puncture marks on her neck and shoulder, and slashes on the back of her neck.

As a DSU student, Carter studied art and psychology. Scott Williamson, a friend of Carter’s, attempted to get her an honorary degree, but too much time had passed since she had been a student prior to her death.

Williamson described Carter as “a hurricane.”

“She was a free-spirited, hippie, loving, nonjudgmental person,” Williamson said “She’d be there for anybody, you’d call her, she’d be there.”

Carter was a loving mother as well, said Williamson, and her and her daughter shared a great bond.

Williamson has a show on Radio Dixie dedicated to Carter titled, “The Liz Show,” where he plays randomized music as a tribute to how he and Carter used to pass time through playing random songs. This show takes place on Fridays at noon.

A foundation is also in the works by Williamson dedicated to Carter, but it has not yet been finalized or publicly announced.