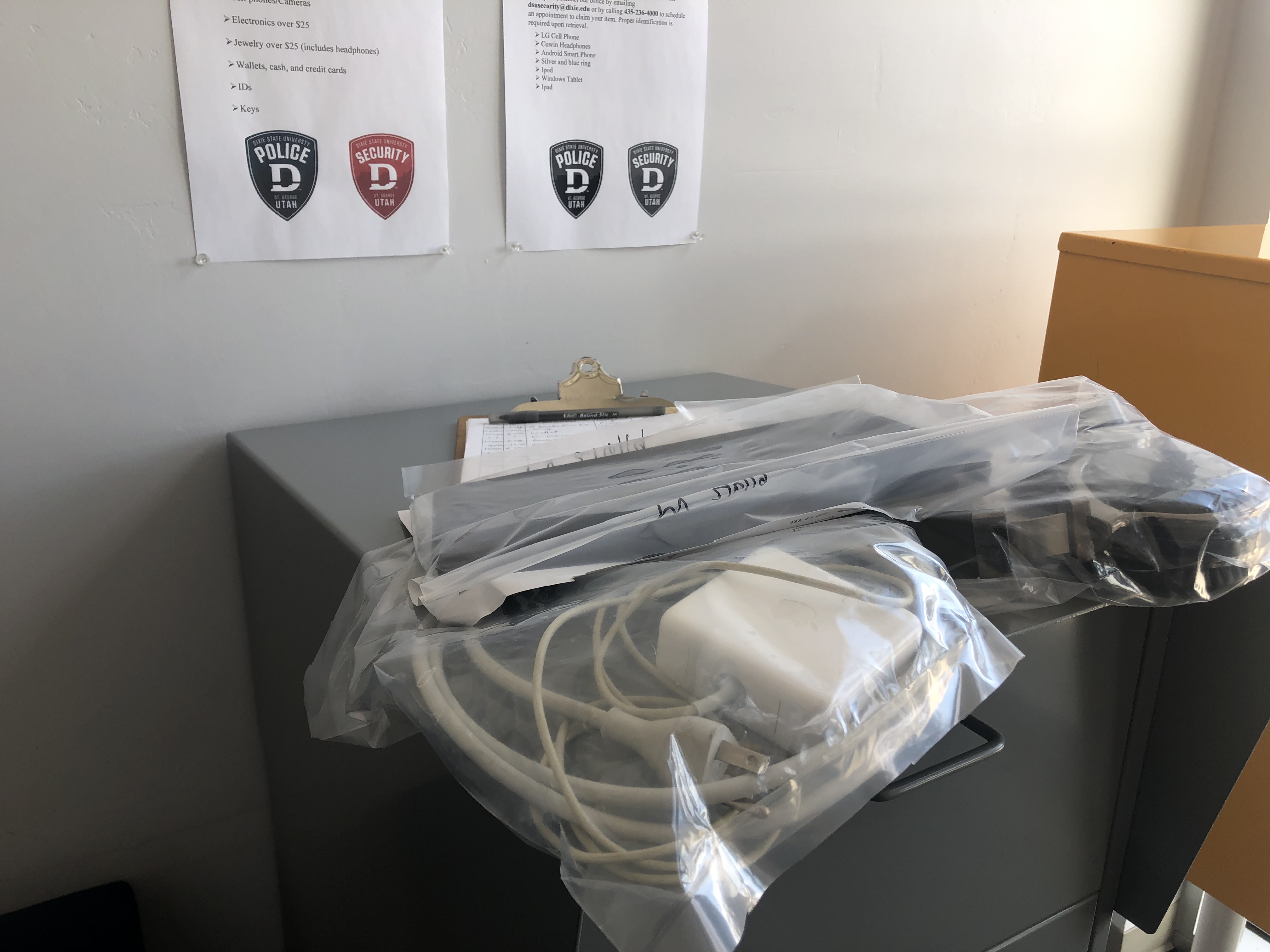 The Dixie State University Campus Police department provides a lost and found drop-box to have a secure location for misplaced valuables.

The drop-box, placed right inside the doors of the department lobby located in the Anthony M. Burns Arena, was approved by the building committee and the campus administration in October of 2018, Chief of Police Blair Barfuss said.

The DSUPD doors are always unlocked to provide 24-hour access to the drop-box, Barfuss said. The officers empty the components of the box daily and put the items into secure evidence.

“Our role for the university is to take position and document valuables,” Barfuss said.

The building was used as a generic lost and found for years, but they were unable to maintain that kind of storage, Barfuss said. When Barfuss became the chief eight months ago, he decided to clean out the room and limit their lost and found to only valuables.

The police department only accepts the following items:

If a student is trying to drop off an item not on this list, they must return it to the building it was found in.

When an individual drops off an item, the officer on duty logs the information on paper and in the computer, Barfuss said. This information includes what was dropped off, who dropped it off, the individual’s contact information, and where they found the item.

If the item has an ID connected to it such as a credit card, they reach out to that student to inform them of their item being in the lost and found.

Mason Aldred, a junior pre-med biology major from St. George, lost his credit card and was contacted by the police department to pick it up.

“The campus police [department] was probably the best place for it to be turned in,” Aldred said. “I’m glad someone thought that through when they found it.”

Items that have no ID are considered unclaimed. Students can go online to publicsafety.dixie.edu, click on “security,” then “lost and found” to report something as lost. This way, officers can pair up almost everything that comes in, Barfuss said.

All items, whether they be unclaimed or officers just can’t get ahold of the owners, remain at the DSUPD for 90 days, Barfuss said. The officers are required to post a list of the items in public places such as online and in the lobby. After the 90-day period, students have 10 more days to pick up the items before they are sent to I.T. to be wiped and destroyed.

The following items have gone unclaimed for over 90 days and will be disposed of by the end of February.

If you have lost an item and believe one of the items above could be yours, contact the police department office by emailing dsusecurity@dixie.edu or by calling 435-236-4000 to schedule an appointment to claim your item. Proper identification is required upon retrieval.