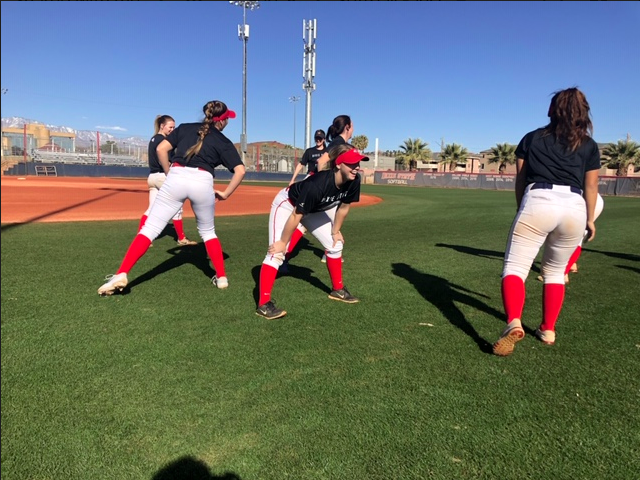 The Dixie State University softball team entered its 2019 season as the Rocky Mountain Athletic Conference preseason favorite, according to the Preseason All-RMAC Release.

“The target just gets bigger so we have to get better,” Simkins said. “It’s a little bit tougher, but our girls are up for the challenge so it’ll be fun.”

The RMAC schedule for the Trailblazers is different than last year’s PacWest schedule. The Trailblazers have 10 straight weekends of Saturday and Sunday double headers. Additionally, DSU now has 40 conference games as opposed to 32 last year.

Bailey Gaffin, a senior business administration major from Glendale, Arizona, said she is excited to go into the new conference this year.

“I’m really excited to get in there and see how the RMAC teams are,” Gaffin said. “We’re used to playing more of the PacWest teams so [now it’s] seeing what the competition is going to be like and hopefully dominating.”

Jessica Gonzalez, a senior business administration major from Kingsburg, California, said DSU has a short amount of time to make an impact on the conference because they are moving to the Western Athletic Conference in 2020.

“We already have a target on our back,” Gonzalez said. “Putting us in first only made it bigger. We got a short amount of time, but I think we can go in there and show them what we got in those short two years that we have in that conference.”

“We get a lot of kids back,” Simkins said. “We get our whole infield back, we get our catcher back and some people that were really good in the outfield for us last year. We feel really good about things but every year is a new year. It’s hard to carry a lot over from one year to the next but I think we’re confident going into this year.”

Gonzalez said the Trailblazers have a lot of new faces this year.

“We’re making sure we get those new girls ready to play at the level that we are right now,” Gonzalez said. “But overall I feel like we’re a pretty good team this year.”

The Trailblazers start the season with a home double header on Feb. 5 against the University of Hawaii at Hilo at 2 p.m and Central Washington University at 4 p.m. Both of these games will be played at Karl Brooks Field.