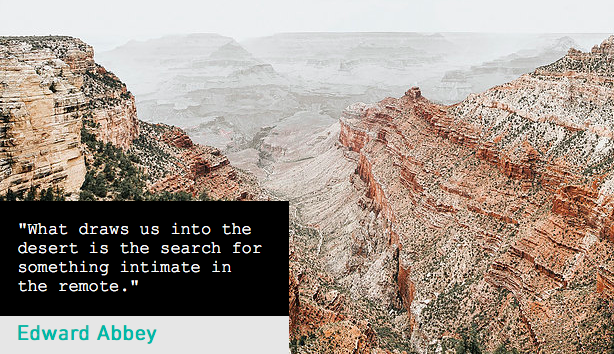 “Wind blew against her back, cooling the air just slightly from the scorching sun above. Above, the sky was a purple-tinted blanket of its own, stretching over the flats, dunes, and plateaus alike.”

This is a quote from a fiction story called “A River in the Desert,” which was featured in Route 7, an online literary journal run out of Dixie State University.

Route 7 is geared toward publishing works that “recreate the sense of majestic beauty and wonder” of exploring the desert, according to its website. The most current edition was released on Dec. 14, 2018, and features four reviews, seven fiction stories, 11 nonfiction stories, 13 visual art pieces and 40 poems. Shauna Wight, the current director of Route 7 and the English professor of the digital journal production course it’s attached to, said these works were chosen from roughly 300 submissions.

“The poetry and fiction sections got tons and tons of submissions,” said Emma Lee, one of the fiction and poetry editors and a senior English major from Simi Valley, California. “It’s hard to pin down exactly how many because many of the authors would submit several pieces together. I probably read through a good 50 or so works.”

Founding editor Stephen Armstrong, a professor of English, said he and former colleague John Chavez came up with Route 7 and initiated its development in the summer of 2012 as part of the development of the relatively new creative writing program.

One goal of Route 7 was to distinguish itself from similar journals such as The Southern Quill, which has been around since 1951. Armstrong said that was why Route 7 was a solely digital publication until its second edition, and Lee said there is more freedom for the editing team to make each issue of the journal their own since there is an entirely new team for every issue, whereas The Southern Quill is a repeatable course and can keep the same staff across multiple semesters.

“John and I, we worked together,” Armstrong said. “We said, ‘We need to have a digital publication and the publication will be sort of a counterweight to The Southern Quill, which is in-house, featuring local submissions from Clark and Washington counties. And that’s nice, but we want to go global; we want to get the name out there.’”

Route 7 was then named after one of the old routes near the St. George Regional Airport, as per the desert theme, and Armstrong and Chavez recruited two founding interns, one an English major and the other “an IT guy” and created the first edition, which came out in 2013.

Armstrong said: “It was a heck of a lot of work to get that first edition together. And we did.”

This work included soliciting works from all around the world, interviewing with photographers and editing submissions within a single semester.

Armstrong was involved with Route 7 for its first two years, then shifted his role to being a contributor and an editor at-large. During its second edition was when the journal had its first print version as a companion to the digital component, with the white cover of the print edition being modeled after those found in vending stalls in Paris.

Armstrong said Route 7 has always drawn high-quality submissions, including content from people such as Laurence Jackson Hyman, son of famous author Shirley Jackson, who wrote stories such as “The Lottery” and “The Haunting of Hill House.” Some of the accepted submissions don’t even follow the desert theme and are instead accepted based on quality.

General editor Cadence Summers, a senior English major from West Valley City, said: “The class is a really cool hands-on experience that required us to actively participate, come up with ideas and solve problems, [especially since] we only had 16 weeks to read, accept and edit submissions, along with designing and producing it… It was kind of urgent, but it was also really cool to use all of the skills I’ve learned in my other courses as we went along. I think this is one of my favorite classes that I have taken so far at Dixie [State University] and I highly recommend it.”

Route 7 accepts submissions each fall semester and publishes those chosen each December.