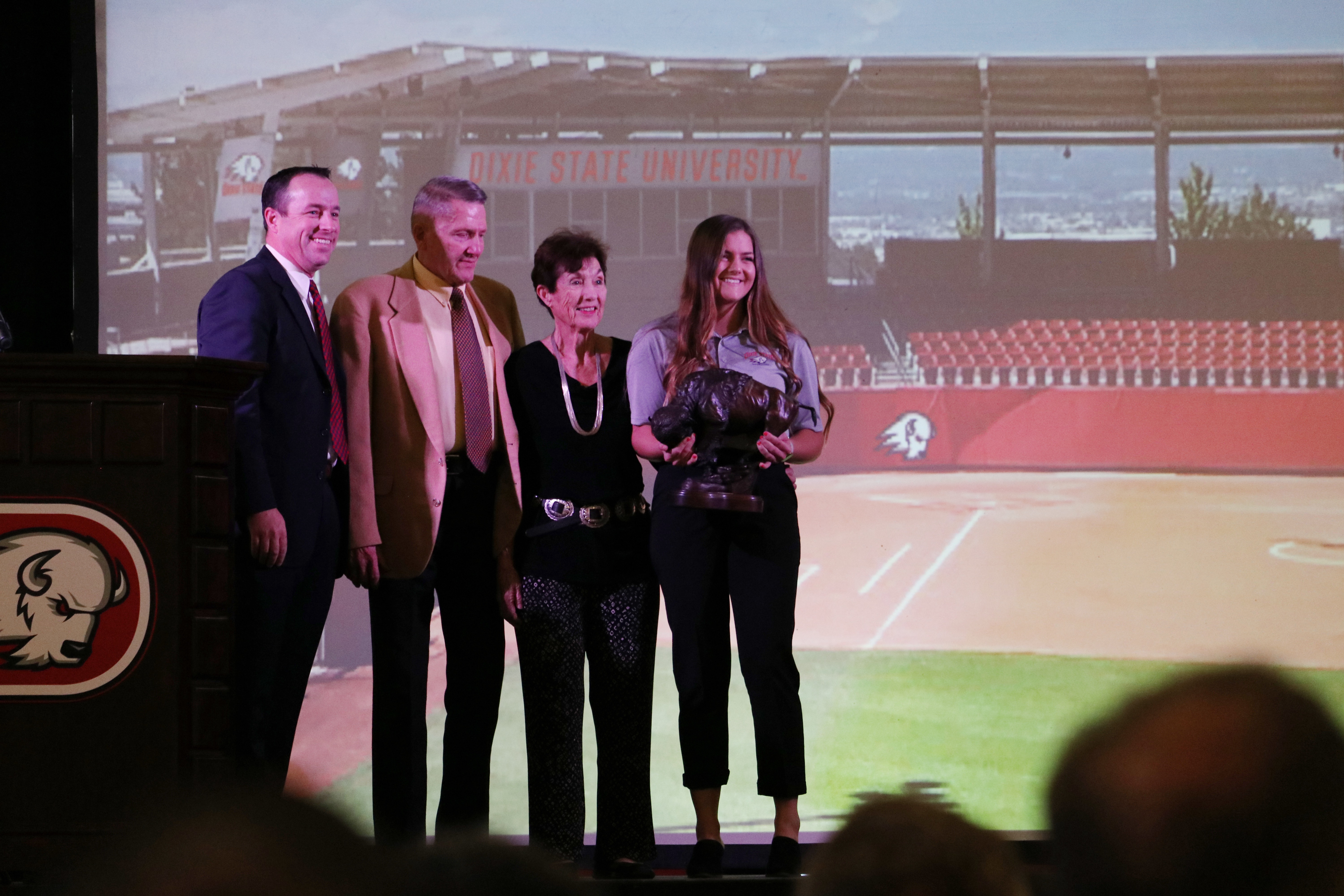 Dixie State University Athletics announced its decision to join the Division I Western Athletic Conference on Jan. 11 in the Student Activity Center.

Lionel Hollins, DSU alumnus and basketball member of the Hall of Fame, hosted the event, and Gov. Gary Herbert, President Biff Williams and other public officials were also present.

DSU will be leaving behind the newly-admitted Rocky Mountain Athletic Conference for the WAC, and all sports will enter the conference by July 1, 2020, Athletic Director Jason Boothe said.

“We have enjoyed over a decade of championship-level success at the NCAA Division II level,” Boothe said. “With the current trajectory of our institution, coupled with the increased growth of St. George and southern Utah, we feel the timing is perfect to take that next step forward to increase the visibility of [DSU].”

Williams made the announcement to a gym full of students, faculty, staff and members of the community. He emphasized to the audience that this opportunity is not only for the athletes and coaches, but the university and community as a whole.

Williams said: “Joining the Western Athletic Conference will not only elevate our athletic teams and allow them to play other high-caliber competitors, but it will elevate our entire university and expand the stage on which we can share the message about the high-quality academic programs, individualized attention and active learning opportunities available at [DSU].”

WAC Commissioner Jeff Hurd has been with the conference for 34 years and is in his sixth year as its commissioner. He said he enjoys bringing new schools into the conference.

“I’ve seen just a little bit of everything happen,” Hurd said. “I can honestly say that one of the most enjoyable parts of my job is the opportunity to come to a new community, to a new campus and to be part of an activity to bring that university in as a full member of the WAC.”

Hurd said the “easy answer” why the WAC chose DSU as the next team to join its D1 conference was because the university went above and beyond the conference’s mantra: “learn, compete and inspire.”

“Several factors make [DSU] a great fit for the WAC,” Hurd said. “Commitment to quality academics and athletics programs, along with the long-term vision that Williams has for the university’s growth, are at the top of the list.”

In a series of meetings held in November, Boothe said athletic and institutional revenue increases, including tuition, tuition waivers, state appropriations and student fees, will help to raise the funds required to enter into a Division I conference.

Boothe also said student fees could increase $21 each semester to raise money. However, DSU will not use faculty or staff compensation or current department budgets to make up the nearly $2 million required, Boothe said.

Boothe said the WAC was willing to pay the $200,000 RMAC exit fee and $750,000 WAC entrance fee, but DSU would be responsible for the $1.7 million NCAA application fee due by June 1, 2020. The NCAA broke down its earnings in “Where Does the Money Go?” where the top three distributions were student scholarships, the Division I basketball performance fund, and Division I championships.

“[DSU’s] new membership in the WAC will be great for collegiate athletics in Utah and for the fans of both universities,” said Vince Otoupal, Utah Valley University’s athletic director. “It will also be really fun to rekindle our old junior college rivalry from the ’80s and ’90s, which I’m sure will spark many fond memories from our alumni.”

DSU Athletics also announced a $1 million donation by Denis and Diane Lyman for the renovations of the softball field and the inclusion of a “1” next to the “D” on the hill for the seven days following the D1 announcement.

“We look forward to working with our local community, students, faculty and staff, fans, sponsors and alumni as we build the programs up in this next phase for Trailblazer Athletics,” Boothe said.