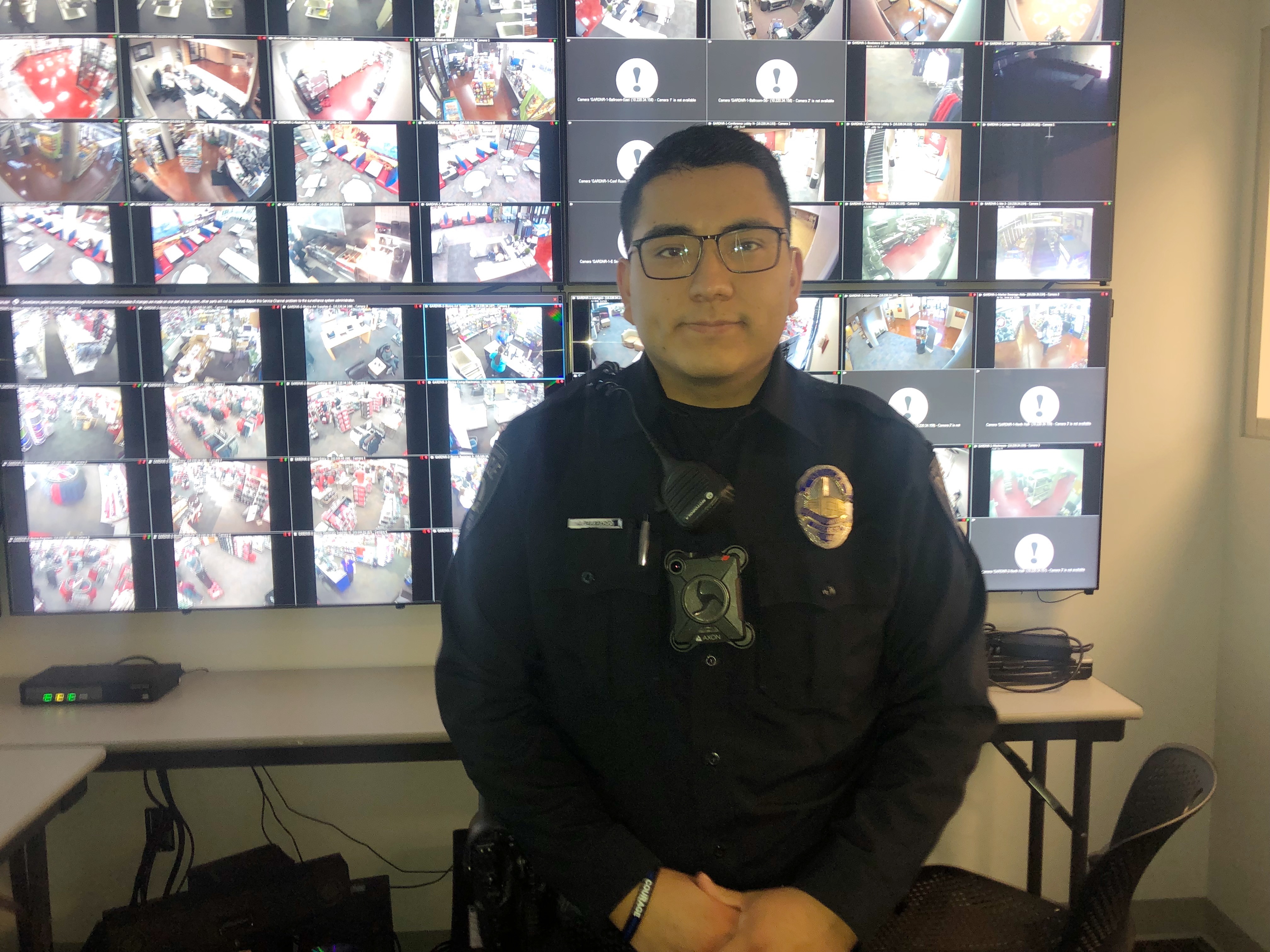 Dixie State University Police Department officer explains the newly enforced body cameras. The camera can rewind 30 seconds which can allow it to catch any incident recorded beforehand and available to officers if needed for evidence. Photo by Jessica Johnson.

The Dixie State University Police Department officially implemented body cameras into their police budget as of fall of 2018.

The DSUPD discussed the possibility of body cams after the hiring of the new chief of police Blair Barfuss in May. He said he felt it would make a positive impact on campus and be a useful asset to the police department, having used this technology at his previous position in West Valley.

Barfuss said once the record button is pressed, the camera rewinds 30 seconds, allowing it to catch the incident leading up to the contact. Everything recorded on the cameras is saved and put into evidence and collection release. The recordings are then available to officers if needed for evidence after a serious altercation or when writing reports, Barfuss said.

According to Barfuss, in order for the DSUPD to make this addition to the current police department budget, they had to be more aware of what they were spending and make sure to prioritize what the funding is being used for. The general police fund is used for things such as office supplies, police uniforms, police training and gas for vehicles.

Barfuss said one reason he advocated for the body cams was safety on campus; he said he wants people to know that they are being protected.

Even though there haven’t been any serious incidents on campus between officers and the public, Barfuss and his officers have seen the value in having body cams over the years, he said.

Olivia Koziatek, a freshman general education major from Salt Lake City, said she questions whether it is a necessity for the police force to have body cams if there haven’t been specific reports about students retaliating against the officers or vice versa.

“The cameras might backfire and cause more violence because it’s adding extra protection when nothing caused it,” Koziatek said.

Barfuss said he doesn’t have any doubts about the use of body cams for his officers because he has the knowledge about national research and studies indicating the value of body cams.

A 2018 study by Northwestern Law found that officers equipped with body cams had fewer complaints and less recorded use of force than officers without.

Barfuss said his most significant reason for encouraging the use of body cams is transparency.

“[The body cams] allow anybody to see what’s going on with the officers and how they handle incidences,” Barfuss said.

Officer and training coordinator Daniel Kaonohi said he thinks the biggest change in having the body cams is the public interaction.

“[The body cams] keep the officers honest and I know in the public eye, people like to see the officer is recording everything that is happening,” Kaonohi said.

Tylee Blackner, a freshman education major from Kaysville, said the body cams will do good.

“I think the police having body cams will benefit everyone on campus,” Blackner said. “For me, it makes me feel safer knowing everyone is protected on both sides of the camera.”