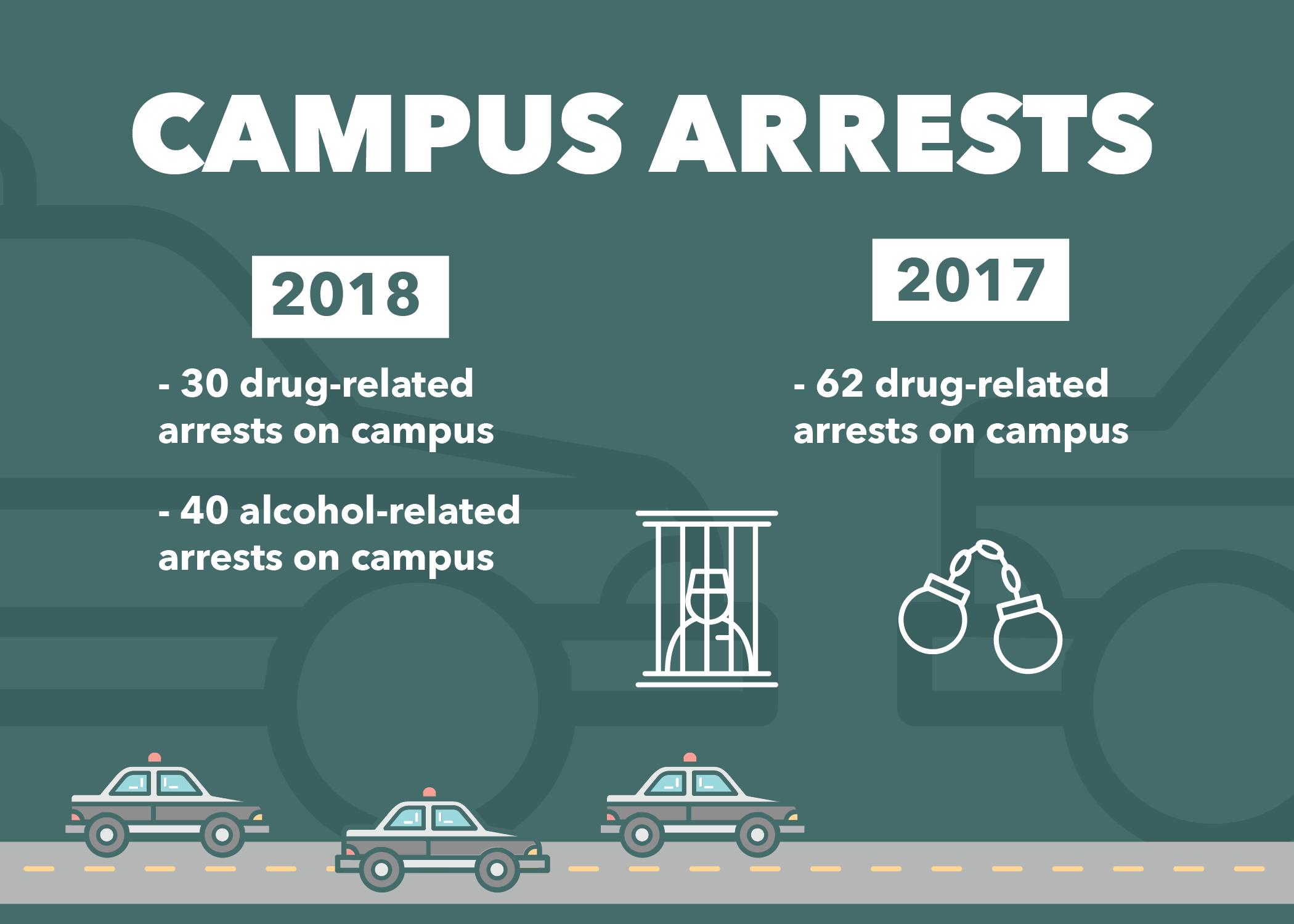 There were a total of 62 drug-related arrests on campus property and in on-campus housing in 2017, according to Dixie State University’s Annual Security and Fire Safety Report.

Blair Barfuss, DSU’s chief of campus police, and Seth Gubler, director of housing and resident life, said the most commonly abused substances on campus are alcohol and marijuana due to the easy accessibility.

“Popularity of drugs depends largely on availability,” Barfuss said. “The St. George area has a higher-than-average amount of heroin and methamphetamine usage in addition to prescription opioid abuse, which can bleed over into the university’s geographical reporting area.”

In 2018, Barfuss said there have been roughly 30 marijuana or drug-paraphernalia-related arrests and 40 alcohol-related arrests. He said most of the arrests happen at events like the Foam Dance or Chaos.

“This is because many students show up intoxicated or bring marijuana to the events, where we have many officers ready to handle these types of concerns,” Barfuss said.

Despite the increase in arrests from 2017 to 2018, Barfuss said this doesn’t necessarily mean an increase in drug and alcohol use on campus.

“… Since I began as the new chief of police we have changed how dispatch services work, how police reporting occurs, and implemented many policy and procedures, to get the DSUPD closer to where a police department should be,” Barfuss said. “This means our numbers are increasing because of how our reporting occurs. What we are doing well in is creating documentation and statistics of police action which has never been done adequately in the past.”

Barfuss said although campus police are pulling university resources to help prevent drug and alcohol use on campus, the current staffing does not allow for extensive preventative measures.

“Outside of working with the Health and Wellness Center, criminal justice programs, and simple patrols, our staffing does not currently allow us to take preventative measures,” Barfuss said. “Remember, we only have four officers working patrol duties which means their time is very limited for proactive preventative teaching or trainings.”

A student at DSU using the pseudonym Mike said he has purchased and smoked cannabis recreationally.

“Everybody, everybody has weed on campus,” Mike said. “It’s not hard to get at all. You just have to ask.”

Mike said he buys from quite a few sources with no regular merchant.

“It’s almost like you hang out with the people who do that stuff,” Mike said. “I’ve never met someone who is super against weed. It’s legalized in most places and now in Utah, medically.”

Barfuss said opioid addiction is becoming increasingly common around the nation, but heroin usage and overdoses are more highly concentrated in Utah. Opioid addiction, however, can stem from very legal sources, he said.

“The opioid epidemic is not just a ‘Utah’ issue,” Barfuss said. “The opioid epidemic is nationwide and affects DSU’s students and staff like all other schools throughout the United States. We have people who were injured in car wrecks, mountain bike accidents, etc., and they become addicted to legally prescribed medication. Once the medication is not refilled by doctors, they seek relief through heroin. It is a very scary cycle.”

Overall, Barfuss said there are local entities working non-stop to ensure the safety of the community.

“DSUPD is an active member of the Washington County Drug Strike Force, which does a phenomenal job monitoring the drug flow in and out of the St. George area, and arresting those responsible for supplying illegal drugs to our community,” Barfuss said.

Gubler said he is starting the conversation about the dangers of drug abuse on campus by inviting experts from Intermountain Healthcare to speak with students and posting information and resources in and around campus housing.

“I think the more people talk about it, the less it’s something hidden in corners and hopefully, if anything, at least one person is better off for that,” Gubler said. “Sometimes raising a voice isn’t hurting someone, [but] it’s helping them. I hope that [students] would feel comfortable talking to an adviser, a professor [or] someone that might be able to help take those steps to try to make a situation better than what it is.”

If you or someone you know is battling substance abuse, reach out to the National Substance Abuse and Mental Health Services Administration Helpline or anonymously report through DSU’s “Report a Concern” webpage.