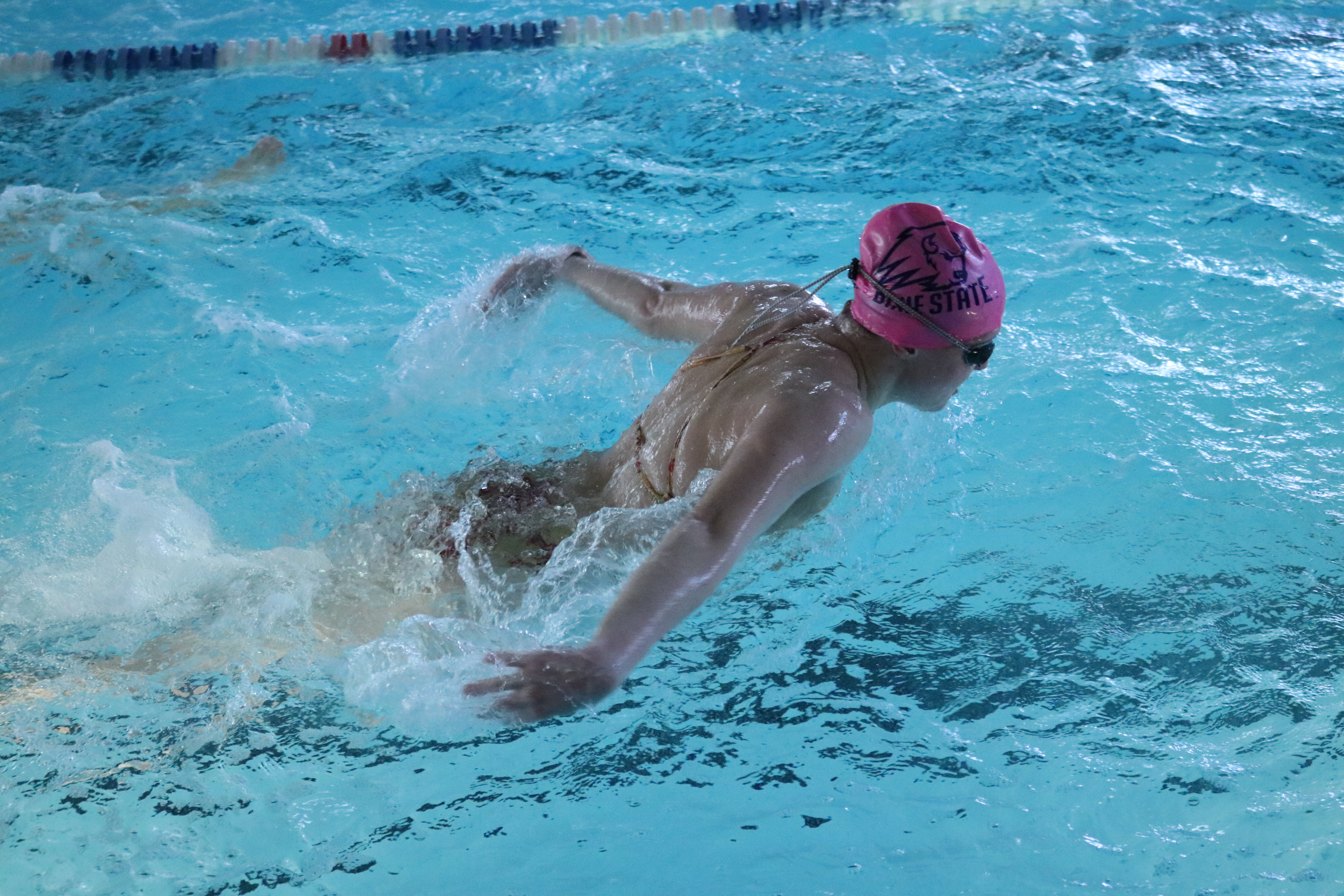 The Dixie State University swimming team is making its mark here while competing alongside teams in the RMAC.

Miriam Gonzalez, a sophomore secondary arts major from Murrieta, California, said at the beginning of the season she felt like it was going to be hard because of all the freshman who joined the team, but now she loves the season and  loves everyone.

Wright said this season so far is different than her previous seasons.

“This has been personally one of my best swim seasons,” Wright said.

Wright said she does not usually do this well in the beginning meets. She said she is excited to go to the conferences meet because she wants to see what else the team is capable of and she thinks the team can break more records.

The swim team has, as of now, set eight new records. The first four new records occurred before their meet on Nov. 16-18.

DSU set a new school record in the 3×100 back, setting the new record time to 3:01.86. They then broke the school 3×500 free standard record with 16:39.43. Audrey Hyde, a junior from Wenatchee, Washington, broke the DSU school record in the 25 free swim with a fourth-place win of 11 minutes and 75 seconds. At the same meet the team also went on to create a new 3×100 fly record with 3:03.71 in the first race of the opening meet. DSU set one more school standard and recorded a total of 16 top-10 program marks to take fifth in the team competition with 84 points in the opening meet.

Five more new records were created at the Colorado Mesa A3 Performance Invitational at the CMU El Pomar Natatorium on Nov. 16-18.  There is a new 400 yard freestyle relay team time of 3:30.18. Wright also broke the DSU 100 free record with a 52.19 opening leg. Junior Katie Pack  also collected two school records in the 1,650 free as she broke her own event record by nearly 18 seconds with a time of 17:33.61 to place second overall. In addition, she recorded a 1,000 yard split time of 10:37.18. And Rebecka Anderson, a freshman from Green River, Wyoming, made her mark in DSU’s 200 backstroke all-time list with a time of 2:06.00.

“It’s only the beginning,” McAllister said. “I am excited for the rest [of the season].”

She said she is happy to see what happens with the team because there are many freshman who joined this year.

Gonzalez said the team trains harder one week and tones down their practice before a meet to be ready for the meet.

The team is focusing on the skill details, which most of them have not done in the past, to become faster at swimming, McAllister said.

Wright said she prepares for a meet by visualizing the goal and believing in herself. She said she is trying not to stress and freak out before her meets.

“I used to freak out most of the time… this meet I’m trying to stay as calm as I can,” Gonzalez said. “Freaking out makes me stress. I’ve been trying not to think about [the meet] at all. I still come to practice and train hard and focus on the meet without the stress.”

This is only the third season for swim at DSU.

“It’s such a young program, a lot of people don’t know about our program,” McAllister said. “The more people we recruit and sign from other states, the more our [team] name is out there.”

McAllister said she hands out flyers to other coaches with the team information to let them know about the team.

Wright said many people around her here have no idea that DSU has a swim team until they find out she’s on the team. She said the team recruits swimmers at meets and more clubs are getting to know about them because of this.

McAllister said she does not have experience with the other teams that will be competing with them in the RMAC.  She said the conferences will help her know about the other teams and give her a feel as to how competitive it will be in upcoming meets.

The next meet, the San Diego Shootout,  is Jan. 5 at the USD Sports Center Pool in San Diego, California.