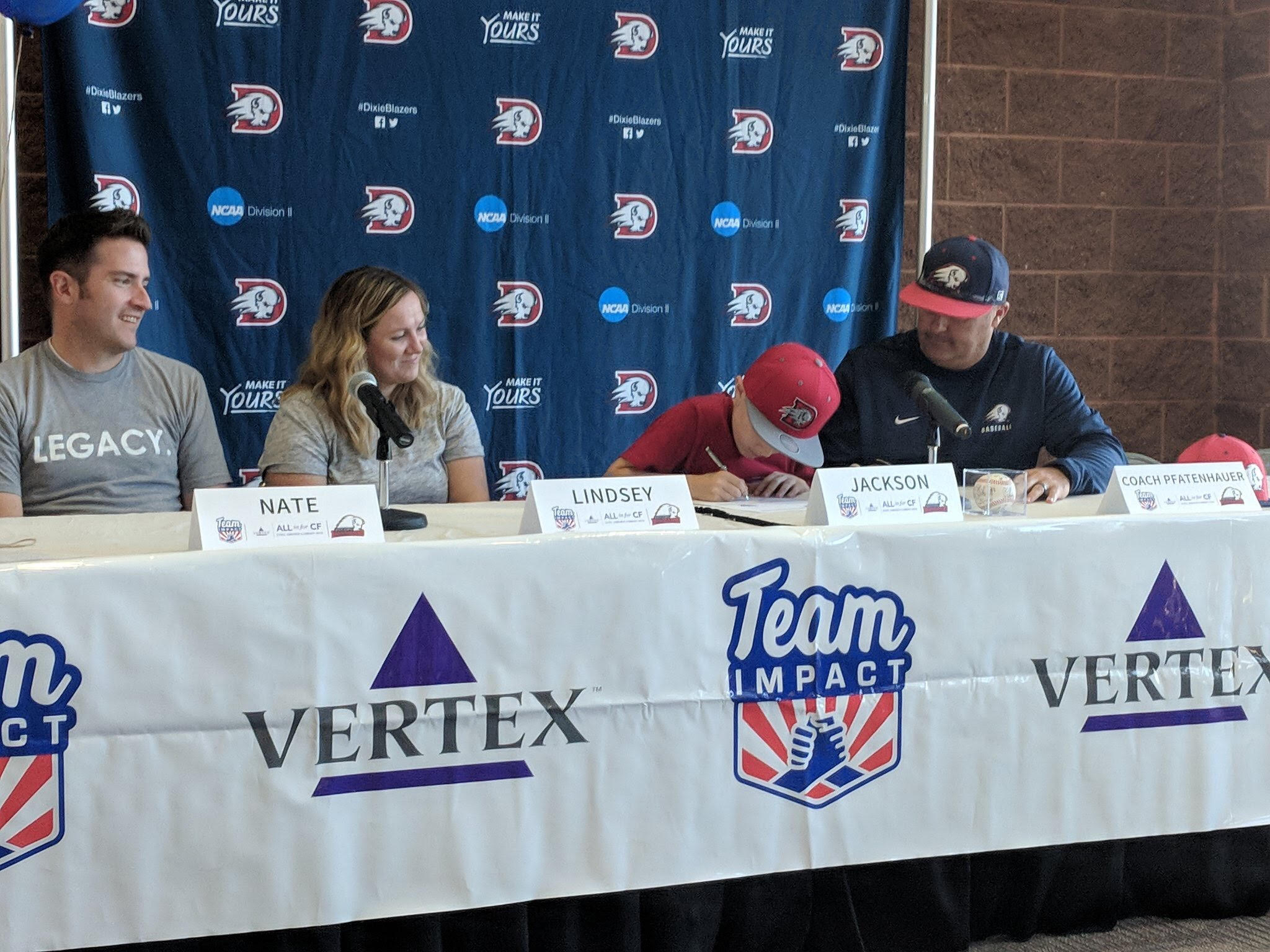 National Signing Day for the 2019-2020 season doesn’t happen for most NCAA athletes until early in 2019, however, for one very special player, it came early.

Jackson Keith, an 11-year-old with cystic fibrosis, signed his Letter of Intent to become an official part of Dixie State University’s baseball team during a ceremony on Oct. 18. Jackson became involved with DSU last year through a nonprofit organization and has spent time with the team and attended practices and games.

“Jackson came to us through Team Impact,” head coach Chris Pfatenhauer said. “Which helps place kids with terminal illnesses or tremendous obstacles in their life with universities to help give them an outlet and something to look forward to.”

Pfatenhauer said he felt Jackson had been a big part of the team and felt it was time to make him an official member of the Trailblazer baseball family.

Jack Gonzalez, a sophomore criminal justice major from Oceanside, California, said he and three other players had the opportunity to get to know Jackson on a more personal level.

“We first met Jackson early last year and we have been able to keep in contact with him since then through emails and messages which has really helped us in getting to know him more and helped him feel more comfortable,” Gonzalez said.

He said he felt that getting to know the team and be close with the guys is a big part of the team dynamic and he wanted Jackson to be a part of that.

“He’s a great kid,” Gonzalez said. “He loves sports, hes athletic and energetic, he loves going to school and hanging out with his friends. He’s honestly just a normal kid with some extraordinary circumstances and it’s been great to get to know him and now to have him as an official part of our team.”

During the press conference, Jackson said: “I’m not really sure how I’m going to contribute because you’re all way better at baseball than me. I’m not the best but on the bench, I want to help out the best I can.”

Jackson’s father, Nate Keith, also said it was a super cool experience for all of them.

“Jackson’s always been really good at doing things for other people,” Nate said. “So its awesome to see him become a part of a team that has been so supportive of him.”

Jackson said he would be at as many games and practices that he could and couldn’t wait for this year’s season to officially start in the spring.

“We are so excited to have Jackson as part of our family,” Pfatenhauer said. “The ceremony was awesome not only for him and his family, but for my other guys to be a part of too. We are all looking forward to having him out here with us.”