DSU clock tower takes time to get used to, grows on students 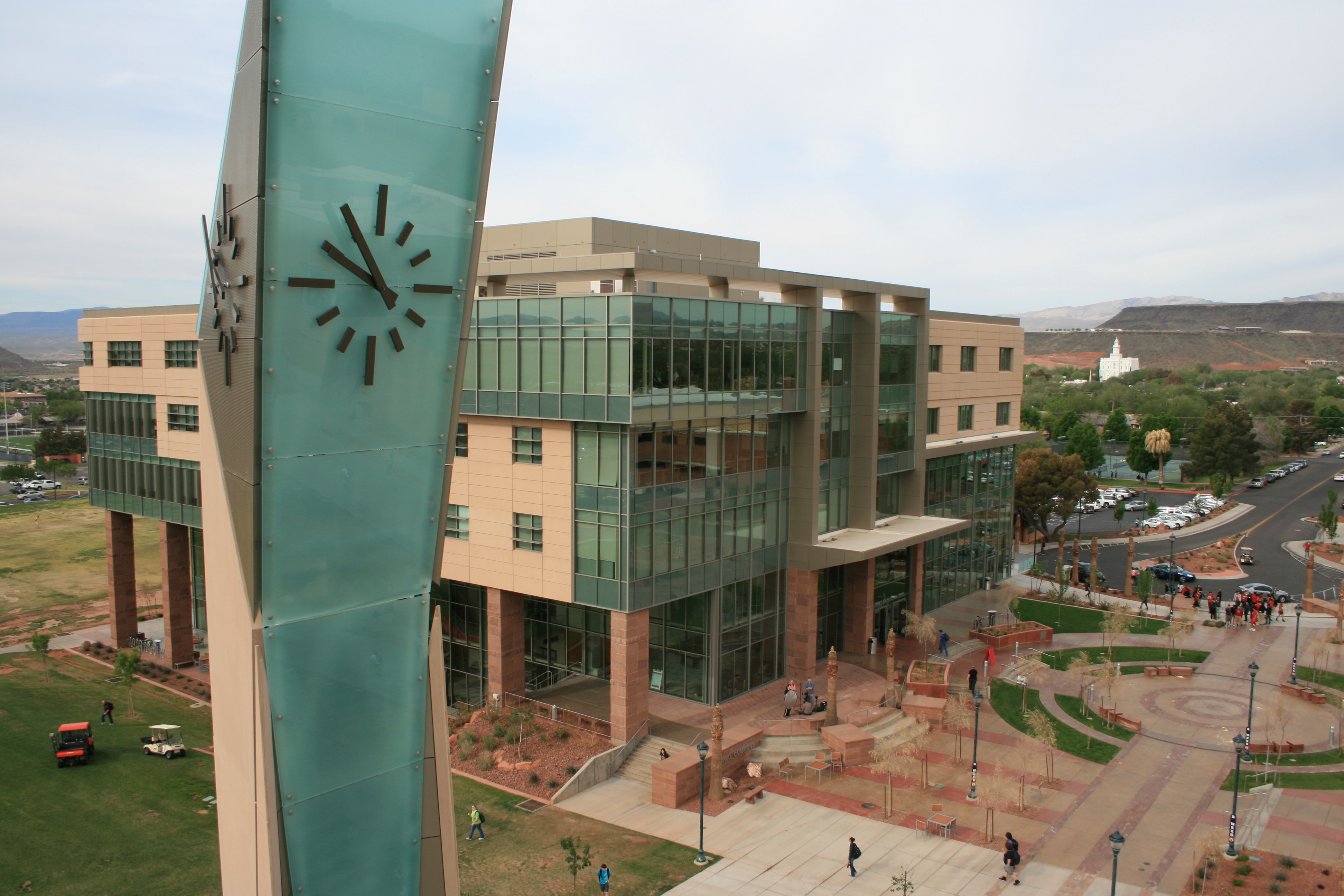 With its modern triangular design and powerful night lights, Dixie State University’s clock tower might be the most noticeable thing on campus besides administrative abuse of power.

At first, I thought the clock tower looked like an alien obelisk bent on oppressing humanity, a colossal waste of money that could be better spent on thousands of individual digital alarm clocks for students. But the more I’ve been exposed to it, the more I’ve come to appreciate it.

Initially, I had mixed feelings about DSU’s chief landmark. For starters, its three abstract, futuristic clock faces aren’t great at telling time. Sure, it’s easy enough to ascertain the hour, but without strenuous inspection, the most you’ll be able to gather is that it’s vaguely before or after any given hour.

This fault is mitigated somewhat by its triumphant hourly chime, a helpful reminder that class will eventually end, or that you are running late.

For a clock tower that is poor at telling time, its cost seems exorbitant. The clock tower had a projected construction cost of $1.2 million, according to an article by Fox 13 Salt Lake City.

Perhaps this can be attributed to its secondary, but more impressive qualities. The tower has a programmable, high-tech sound and LED lighting system with 278 color choices, according to Wheaton Sprague Building Envelope.

It is akin to a ludicrously large and expensive Amazon Echo built into the grounds of DSU. Its size, flashy lights and powerful stereos raised concerns about audio and light pollution, as well as for the local wildlife; however, the tower is essentially benign, despite its alien appearance.

“Just before the tower was built, there were some concerns about the tower being a source of light pollution at night,” biology professor Marius van der Merwe said. “This concern was not about wildlife, but about the potential impact on the visibility of stars at night.”

But since the tower was built, that concern largely disappeared, Merwe said.

But despite my presumptions to the contrary, the bright, 80-foot clock tower covered in Plexiglas does not pose a threat to local birds.

“I don’t know about it blocking the path of birds, or why the gigantic Holland Building isn’t a problem and the relatively smaller clock tower would be,” said Geoff Smith, assistant professor of biology.

“The noise it makes could be disruptive, especially when it blares music certain times of the year, but this campus is busy and loud with lots of people,” Smith said.

The clock tower is a bit like a modern art painting: The more you’re exposed to it, the more you start to like it. It’s the mainstay, a beacon of stability in a campus that’s always moving. If you spot it out the window during class, you get lost in its triangle panels and Plexiglas accents.

I’ve come to look at the tower’s iconography as a symbol of the years spent at DSU, and the days I’ve been reassured or panicked by its obscured tracking of minutes.

Give the clock tower a chance, and it just might grow on you. It can be a comforting landmark, a longstanding memory, like a time capsule of your college education that opens when looking at it, and a sweet boombox and night light.