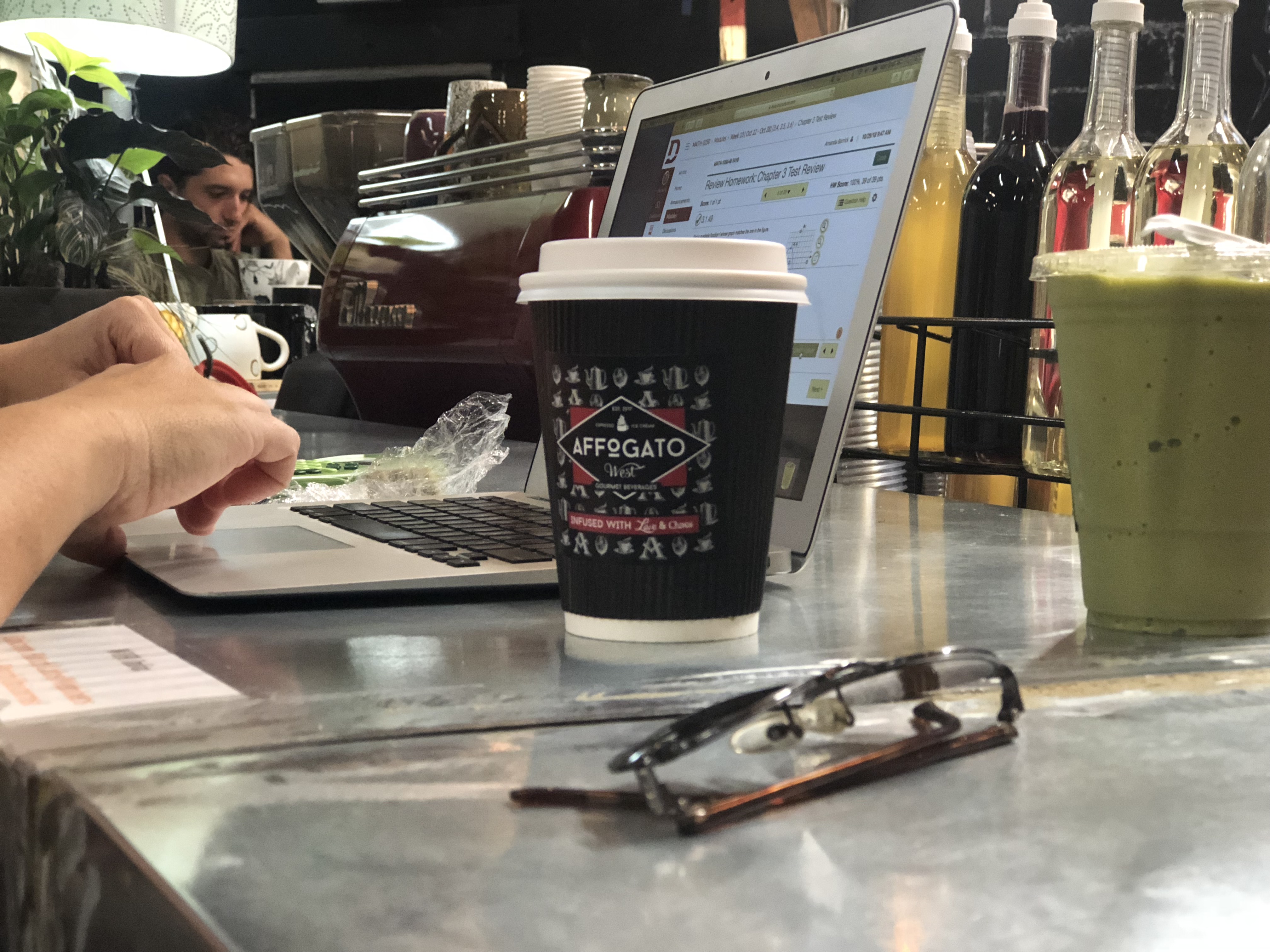 Those bored with mainstream chains or looking for a livelier scene must experience Affogato West — St. George’s best-kept espresso secret.

Many of us who identify as morning coffee drinkers have established a ritual to help ourselves survive the day. For some, the need for caffeine borders on medicinal; For others, it’s recreational. Regardless, this coffee shop just blocks from our campus is the perfect niche for all who enter into its whimsical and unique atmosphere.

Elise West began Affogato West as a mobile truck operating in 2017 after years of dreaming and planning her idea for a business. She discovered an incredible truck located in Phoenix, Arizona, and after driving it back to St. George, found a permanent home in the parking lot of Red Rock Bicycle. West worked with her dedicated crew of baristas to craft a local name for herself. With the belief that every drink should reflect quality ingredients and effort, these gourmet beverages became instantly popular, and West cultivated an extensive coffee family. Her customers couldn’t wait to return every morning to be part of the magic.

“I remember going to the truck when it was parked outside the bicycle shop. Elise set up a canopy out front, and all sorts of people from around St. George would show up, sitting in chairs and sipping their coffee. We loved it. The atmosphere was at once really homey and chic. Just cool. And the drinks were always delicious,” said DSU English professor Stephen B. Armstrong.

Due to mechanical problems with the popular truck, this past August, Affogato West relocated to a hip, eclectic home inside Unicorn Hatch Labs, an exciting workplace that was built in an empty, skeletal movie theater. Complete with hammocks, skateboard ramps, and a foam pit to zip line into, the old warehouse is anything but traditional.  Within these cavernous walls, coffee-lovers of every age, gender and background are transported to a place that no longer feels like small-town Southern Utah, but, rather, a vintage, beach-house blend of trendiness you’d find in bigger cities and college towns.

“The reason that people love us is because we act as a third home for them,” West said. “To me, it’s all about creating an environment where people can come and just be themselves.”

Affogato West’s aromatic vibe and zany decoration promote productivity and genuinely good vibes. This coffee shop doubles as a sanctuary where the employees know their customers by name and strangers can strike a substantial conversation with one another. The staff commonly greets their familiar clients with a hug and strives to make everybody feel welcome in their family.

Affogato West is playing a phenomenal role in the community, and especially at Dixie State University. From hiring students, to acting as a meeting place for various clubs and organizations, West encourages individuals or groups to gather and collaborate. Affogato West and Sigma Tau Delta, the English honors society, will host a book sale fundraiser on October 20 and 21 to raise money for an upcoming convention.

“We are excited to have this opportunity to increase awareness about the importance of reading and analyzing books in our community,” said Dr. AmiJo Comeford, who serves as director of DSU’s Sigma Tau Delta chapter.  “Each year, Sigma Tau Delta hosts a national conference, where students gain vital experience sharing critical essays they’ve written with an audience of scholars. This year’s conference will be in St. Louis. Proceeds from the book sale will help to defer costs for our students. I’m so happy we now have an establishment like Affogato West for people to congregate, discuss literature and have a great time.

Affogato West participates in other community events,  as well, such as Pride of Southern Utah and local farmers markets.

West and her staff support local merchants and artists, too, having them sell their artwork and handmade jewelry. Every Sunday morning, Affogato West offers live music such as jazz or new acoustic material, delivering soothing sounds like a fresh take on The Commodores’ “Easy (Like Sunday Morning).” Customers can be found sipping coffee indoors in their lawn chairs brought from home, the same ones, in fact, clientele enjoyed back when the truck still operated.

“I’m super proud to say that there are no artificial ingredients or flavors, HCFS, dyes or powders with fillers anywhere on our menu, which makes a big difference in how the drink tastes and how we feel afterwards” says West.

The options don’t stop with espresso drinks. The last couple weeks, West has worked with local vendors to supply daily baked treats and healthy food choices such as salads and sandwiches. These efforts make Affogato West a one-stop shop.

Catering to a multitude of lifestyles and dietary preferences, West’s homemade and creative syrups are one-of-a-kind and can support any level of caffeine addiction. Whether you’re on the go or have time to stay and spend the afternoon playing board games or reading recycled books, Affogato West is the place to be.