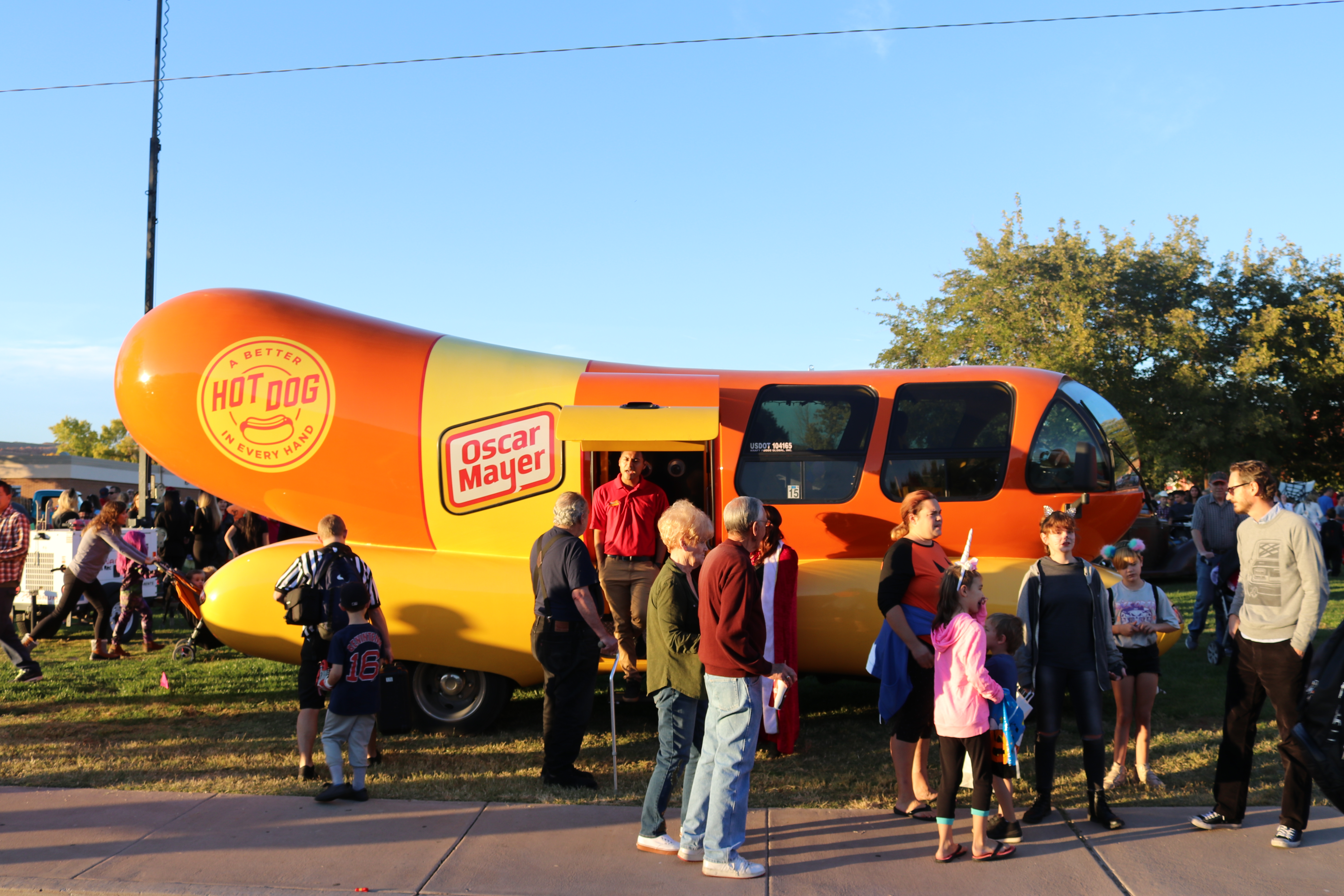 The Oscar Mayer Wienermobile parked at the Innovation Plaza for people to take pictures with during Alumni Trunk or Treat. They hand out small Wienermobile-shaped whistles, called Wiener Whistles. Photo by Madison Anderson.

Monuments mark the sites of historic battles, honor legacies of former presidents, and celebrate lives of celebrities. But what marble-sculpted commemoration could possibly match the awe and historicity of the event taking place at noon on Oct. 30 in front of the Dixie State University student center, when the record for most Wiener Whistles blown at once will be set?

Thousands apply to become hotdoggers each year, but only 12 make the cut, Rozman said.

“There’s only thirteen people who are allowed to speak on behalf of OscarMayer and it’s the twelve hotdoggers and the CEO,” Rozman said.

The hotdoggers put on events in each city, handing out small Wienermobile-shaped whistles, called Wiener Whistles, and promoting OscarMayer products.

“[Wiener Whistles] date back to 1952, so they are pretty historic,” Rozman said.

About 70 percent of their events take place at grocery stores, where OscarMayer products are sold, and the other 30 percent take place everywhere from sports games to parades, Rozman said.

When not entertaining crowds of wiener-gawkers, the Wienermobile garners one of two reactions when encountered in the wild, Sanmiguel said.

“We either get the super-crazed fan who’s like, ‘Oh my gosh, it’s the Wienermobile!'” Sanmiguel said, “and then we get the people who are completely confused or just shocked to see a 27-foot long hot dog on wheels. They don’t know what to expect or what to think, really, because who knew there would be a hot dog turning the corner?”

During their event in front of the DSU student center, the hotdoggers are going to share their famed Wiener Whistles with people of all ages in their bid to create the record for most blown at once.

“We’re actually making [the record],” Sanmiguel said. “[DSU] is making history with the Wienermobile, that’s for sure.”

The hotdoggers are hoping for a thousand simultaneous whistle-blowers, but are trying to gather as many as possible for the event, Rozman said. The hope is, after creating the record at DSU, future hotdoggers will try to break the record, she said.

“I plan on attending, I plan on bringing my friends, probably my family, too,” said Weston Zimmerman, a senior accounting major from St. George. “This will be the third time that I’ve seen the Wienermobile in my life, and every time I see the Wienermobile I get excited for what is to come.”

The position of hotdogger is available to any graduating university students, and the online applications open in January, Rozman said.

“There’s actually quite a few people on this team of 12 that just applied online,” Rozman said. “It’s definitely not a problem if they don’t recruit at your university.”

You can find out more about the record-setting Wiener Whistle event, set to begin on Oct. 30 in front of the student center at noon, on their Facebook page.