More to concert contracts than when, where, salary 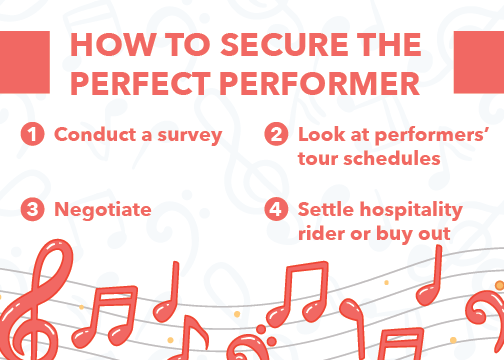 Securing the perfect performer for the Dixie State University Homecoming concert is not as simple as a signature and the shake of a hand.

DSUSA Adviser Luke Kerouac said the general decision for who comes to campus is in the hands of the students. Surveys are circulated throughout the student body each spring semester, Kerouac said, which helps DSUSA narrow down the search for performers.

“One of the really cool things is that the students absolutely get to choose,” Kerouac said.

He said the survey is kept rather broad to bring about realistic suggestions; whereas Beyoncé and Justin Timberlake would be amazing, Kerouac said, their price isn’t in the student government budget.

“We usually ask what types of events [students] want to see, and then what genre,” Kerouac said. “That’s where we start the process, and usually, from there, it’s all about budget. A lot of artists just cost way too much to bring.”

Kerouac said the most popular genres almost always include rap, hip-hop and country, although it varies each year.

Other than the chosen genre, he said DSUSA also takes into account the performers’ tour schedules. A performer’s route is the path they are taking while on tour. Kerouac said DSUSA tries to find a performer going in between big cities like Salt Lake City and Las Vegas, Nevada, when narrowing down who will come to campus.

“Lots of time they will be playing [in] Salt Lake [City] or Las Vegas or southern California [and] we try to find a date that’s a day before or a day after that, so we can get them on that tour and it adds tour dates for them,” Kerouac said.

He said performers coming to St. George are given the added benefit of reaching new fans and selling merchandise on top of the added tour time.

Bailey Zimmerman, DSUSA vice president of student life, said performing at one of the fastest growing colleges in Utah has its added benefits, as well as it being a good stop between Salt Lake City and larger cities in Arizona and Nevada.

Zimmerman said they go through an anonymous promoter to find and negotiate with talent.

“We try to get bands that people have heard of,” Zimmerman said. “Unfortunately we don’t have the world’s biggest concert budget, and concerts are very expensive. I had no idea when I started; I was like ‘Oh my God. It’s amazing how much people charge.’”

Zimmerman said she roughly estimates 80 percent of the concert budget to go to the performer, including the hospitality rider.

Kerouac said in almost every contract there is a section called the hospitality rider where performers are able to make a “wish list” of what they want from the venues.

“In almost every hospitality rider they ask for alcohol, but because we are a dry campus we strike that right away,” Kerouac said.

These riders can encompass a lot of things. Kerouac said he recalled Macklemore asking for a particular brand and color of underwear, while Phillip Phillips asked for food from five separate restaurants, which totalled close to $1,000. Other performers ask for specific kinds and amounts of cheese, he said, it just depends.

“It’s all just kind of funny stuff, really,” Zimmerman said. “I haven’t had anything obscene or crazy.”

Zimmerman said she remembers one group asking for four cans of Easy Cheese. Most performers ask for bubbly water and herbal teas, she said.

“Everyone has their wish list; hospitality riders are basically a big wish list,” Zimmerman said. “Daya’s is broken down into must haves, and it’s like throat-soothing tea, water and dark chocolate candy bars.”

Kid Ink’s hospitality rider was broken down into on-stage and dressing room necessities. On stage he wanted 10 black medium face towels, five large black and white face towels, and one 24-pack of water placed in a cooler filled with ice. His dressing room list was more extensive, including:

Performers also have the option of having a meal buyout, Kerouac said, in which performers can forego requests in exchange for money to buy themselves and their crew meals.

“Lots of times it’s way cheaper because they just ask for $15 a meal for all of their crew,” Kerouac said. “That’s lots of times cheaper than buying all of the specific, 100 items that they have on their hospitality rider.”

Zimmerman and Kerouac said they would love to host another concert in the spring, but feedback is just as necessary as it is with the homecoming concert.

Alumni Ezra Hainsworth, 2017-18 student body president, said DSUSA plans events with the majority in mind, but DSU students have to do their part.

“Students in general could do more to pay attention to the resources established for student feedback. If students miss an opportunity to be informed about planning or an event itself it’s because they didn’t take advantage of what’s been established by the DSUSA,” Hainsworth said.

Kerouac said although they can’t please everyone, they want to try to make the event as fun as possible for most people.

“One of the hard parts of putting on concerts is that we are never going to please everyone,” Kerouac said. “I mean we are not going to find an artist that everyone loves, but I mean if someone is super passionate about concerts come help out. There is no limit on how many people can come help; we always need help. If you want to see the background of the concert, that is one of the cool opportunities students get to [experience].”