OLAG to make recommendation regarding audit of DSU 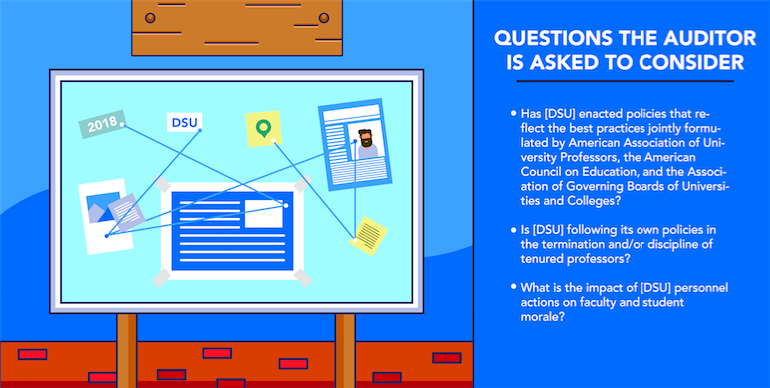 The Office of the Legislative Auditor General will soon make a recommendation as to whether a recent survey of Dixie State University shows a need for an audit.

Five Utah senators drafted and signed the “Audit Request of Dixie State University,” which cited Ken Peterson’s Last Chance Agreement and the circumstances not only surrounding the initial firing of Peterson and Glenn Webb, but also the proceedings leading up to the drafting of Peterson’s Last Chance Agreement and Webb’s Letter of Reprimand, which has drawn national attention.

Utah Senator Jani Iwamoto was one of the five senators to sign the audit request. The request, voted on in the September meeting, was passed, and Senate President Wayne Niederhauser recommended the auditor first survey DSU.

Iwamoto said after hearing what those who reached out had to say, her and her fellow senators, as a caucus, came together and decided the concerns warranted a further look into DSU.

“Over a period of several weeks, several of my Senate colleagues and I received numerous letters, calls and emails from people across the state, including our districts, but primarily from Washington County, who asked that the legislature investigate this issue,” Iwamoto said.

She said the goal of the audit request is to understand the controversy surrounding professor terminations at DSU.

“We are seeking answers as to whether the principles of academic freedom are being upheld and whether tenure is being respected,” Iwamoto said. “We requested an audit to determine if [DSU] has been following its internal policies on employee terminations and to compare DSU policies to best practices for colleges and universities.”

The senators asked the auditors to determine how recent actions by DSU have impacted faculty and students, she said, and to consider any other relevant issues the auditors may encounter.

Iwamoto said the OLAG will make a recommendation, which the committee will vote on. If a full audit is recommended and approved, she said, the OLAG will conduct the audit and present its findings next year.

“I have been impressed by the passion and concern for DSU shown by its alumni, current students, faculty, and even former DSU President Caldwell,” Iwamoto said. “DSU has had a significant impact on so many Utahns, and it is crucial that the entire DSU family get the answers that they seek. We hope that this process will be the start of a process that restores trust in the university.”

“DSU strives to continuously improve its policies and procedures, and it will correct noted deficiencies,” Hicks said.

Brad Asay, president of the American Federation of Teachers‘ Utah chapter, has followed the termination of professors at DSU since Varlo Davenport was terminated in 2016, he said. Asay said Davenport was a union member he helped discuss options with after Davenport’s termination, including the appeals process.

Asay said after Davenport found he was not going to get his job back, DSU sparked his interest once again with the termination of Peterson and Webb. Not long after Asay offered AFT services to Peterson and Webb did legislators begin to ask him what was happening at DSU, he said.

“I kind of informed them on what was going on and what I was getting,” Asay said. “Legislators asked me questions, and [I] informed them.”

Asay said thanks to legislators asking questions and members of the St. George and DSU community sending their concerns, the democratic senators requested an audit.

As a union, AFT ensures public school faculty and staff are allotted due process and federal rights, including state, district and individual school or university policies are followed, Asay said. He said AFT lobbies legislators for laws that affect educators’ rights and are involved with the American Federation of Labor and Congress of Industrial Organizations.

“We don’t enjoy these things that have happened,” Asay said. “It’s not pleasant for anyone who is involved to have to go through this.”

Asay said the most frustrating aspect of Peterson’s case is the lack of due process and the drafting of the Last Chance Agreement.

“There were 28 points in an agreement where there was no remediation, there is no prior issues, and the one prior issue that came up from Hicks was this thing 13 years ago that had no merit,” Asay said.

He said the purpose of a last chance agreement is to offer a last chance to an employee who was given due process and time for remediation but who had not shown adequate growth. Peterson’s Last Chance Agreement was nothing like this and included no remediation or due process, Asay said.

“[The AFT views] this as a very hostile situation,” Asay said.

Asay said faculty feel their voices are not being heard, especially when it comes to due process and shared governance.

“Hicks tried to intimidate faculty members [at DSU] in faculty meetings stating that it was illegal to join a union in Utah,” Asay said. “Absolutely false. Someone who has legal counsel should know the law, [and] he doesn’t know the law.”

He said AFT is not looking for President Biff Williams, Provost Michael Lacourse or Hicks to be removed from their positions at DSU, but rather that faculty are given “a seat at the table” to ensure that due process is followed.

Despite everything and as a union, he said, AFT wants DSU to succeed.

“We don’t ever want to see a university or a public school not succeed,” Asay said. “We are here to have solutions, we are here to help where we can, and we also need people to be treated fairly.”

He said he hopes Peterson will be reinstated as a tenured professor and the Last Chance Agreement is annulled.

“[Peterson] is a pillar in the community,” Asay said. “[Peterson and Webb] have influenced a lot of people, and I think it would be advantageous for the university to swallow their pride a little bit [and] allow [Peterson] back.”

Hicks declined to comment on the topic of faculty intimidation.