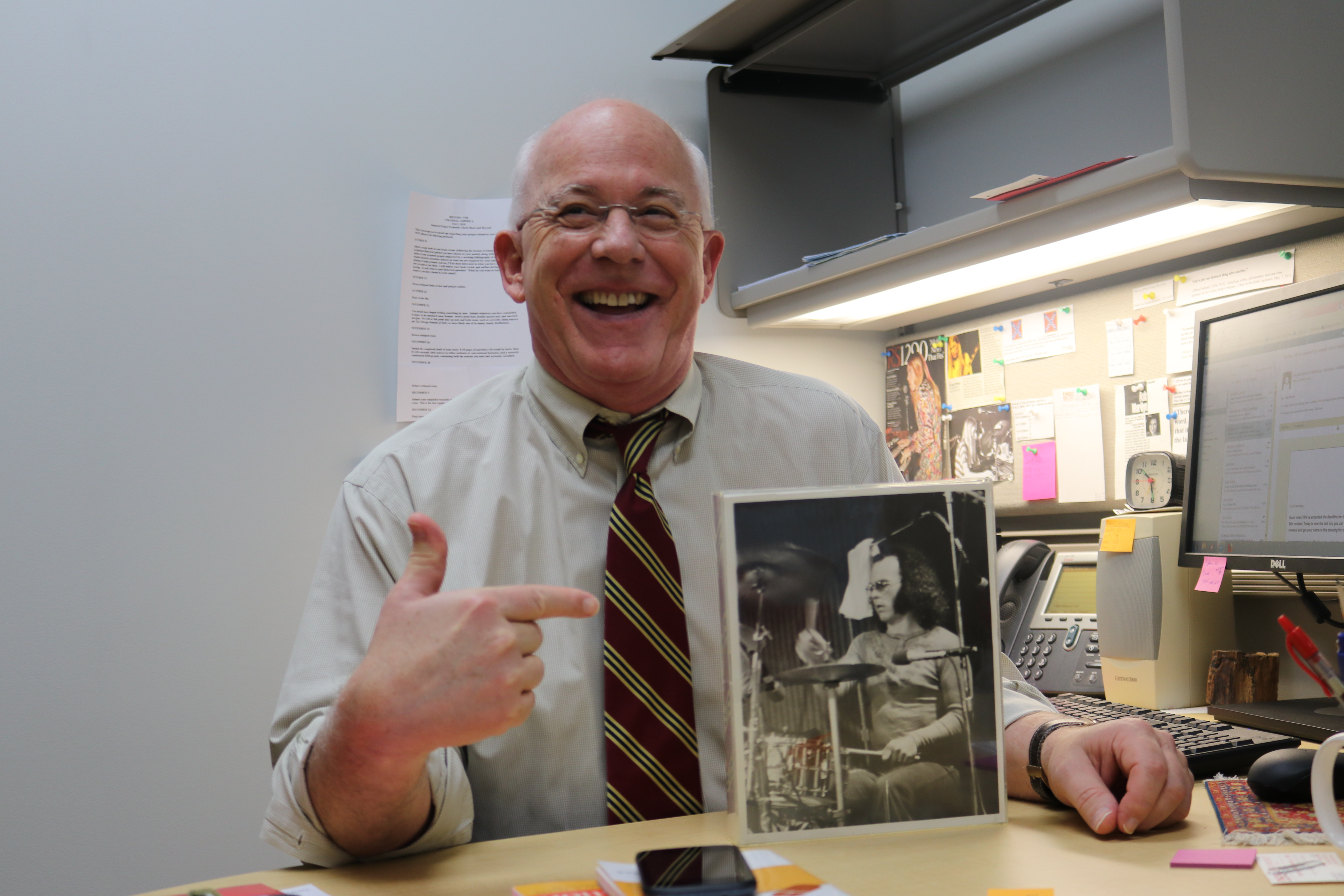 Chip McLeod, professor of history, laughs about a picture of him playing the drums when he was younger. McLeod said history is only one of his passions. Photo by Madison Anderson.

Tenured professor Chip McLeod has been at DSU since 1999, and was elected history department chair in 2016. He teaches courses on US history, from colonization through to the American Civil War and Reconstruction. He started playing the drums at 9-years-old, and even quit college to play in a band before returning and eventually becoming a professor. McLeod still enjoys music, and loves to see bands perform live, but also enjoys watching movies, diving into literature, and hiking.

Q: What historical books, movies or documentaries would you like to recommend, and why?

A: Mcleod said there are four books he would tell people the books are important: The Promised Land by Nicholas Lemann, The radicalism of the American Revolution by Gordon S. Wood, The Hemingses of Monticello by Annette Gordon-Reed and The Diversity Delusion by Heather Mac Donald.

Q: What is the importance of learning history?

A: “That’s the way most people approach the concept when they begin to talk or think about [history]. Learning history is not necessary what one wants to do. The most useful thing to do is understanding how what we know and think about the past is interpretative. It can change. We re-write history every day. The best way to think about [history] is to change the language. Understanding the past requires a dialogue. Thus, we can consider what people have done to create the world we’d inherited.”

Q: Should people be looking more into their own past to help understand why their lives have gone certain ways?

A: “Absolutely. In fact, a doctor can’t even help you if you’re sick unless he or she knows your medical pasted. A sense of—might sound general or trite but it’s not really—a sense  of who you are, where you came from and what that means. It’s highly interpretative. We can know a lot about ourselves individual. It’s an anchor. It’s a great way to situate yourself in the world. Because we are all in this together. It’s all incredibly useful.”

Q: In your opinion, what is an interesting, obscure historical event?

A: “One that springs to mind is the fact that the first attempted assassination of a U.S. president was attempted against [President] Andrew Jackson. It was a disgruntled individual who believed Jackson owed him something. He accosted Jackson in Washington. And he had two pistols with him. He pulled one out and it missed fired. Then, he pulled the other one out, [and] attempted to kill Andrew Jackson and that missed fired too. The reason it’s interesting, not only did Jackson not  become the first president to be assassinated, but they tested the two fire arms [and] they  concluded [the pistols] missed fired, something like one out of 125,000 shots, he had two of them and they both missed fired. I don’t know how you can get better odds than those. Jackson was an interesting guy. He proceeded to beat the man with his cane, but I don’t know how many people know about that.I guess that was [Jackson] lucky day.”

Q: Would you say history is your biggest passion?

A: “I got into history because a I’m a person who need to understand all that I can understand about the world and much of it is difficult to understand. I’d like to know how things work. One way of expressing it, is I’d like to learn how things really work, especially in the human realm. Understanding how we arrived, where we are is very important.  It helps us with [our] perspective. Music as well [is my passion]. It was another life time [of mine]. I was a professional musician. I was a drummer. That’s what I did for a living. I am very interested in roots music: rhythm and blues. I don’t play any longer. I started playing when I was nine. I learned about the music business. My interest in both started around the same time. It was fun when I did it. Nothing thrills me more than a really talented musician. There’s just nothing like it.”

Q: Are you following your dream?

A: “Yeah. More or less. A degree in history teaches so many incredibly valuable skill, whether it’s problem solving, all kinds of modes of critical thinking, expression one selves. I tell students, you might want to consider putting aside the latest list of the ten hottest major and think about this the best you can: do something that you really enjoy, that you really passionate about and get some body to pay you to do it. That’s what I got to do twice. I got paid for years to do music for a living. And I am in my 35th, year in teaching now. And to get someone [to] basically to pay me to do things I love to do and would do any ways is a kind of dream. I think more people should approach it that way. I think they would be happier.”

Q: What would you say to students wanting to follow in your footsteps or choose history as their major?

A: “Quite logically they are looking for a direct plug-in between their major and their job. Of course, they are. If you major in biology, you are looking in a job in biology. The thing with history is that there’s so much more you can do with it. I want to be a writer, or I want to be a teacher or Professor that’s great, but you can do so much more with it. There is no job worth doing that doesn’t value being able to express yourself verbally and in writing. Most degrees you laid on the table and the most logical question is what can I do with that. Well you can do a lot of things with this if you get sincerely involved and engaged.”