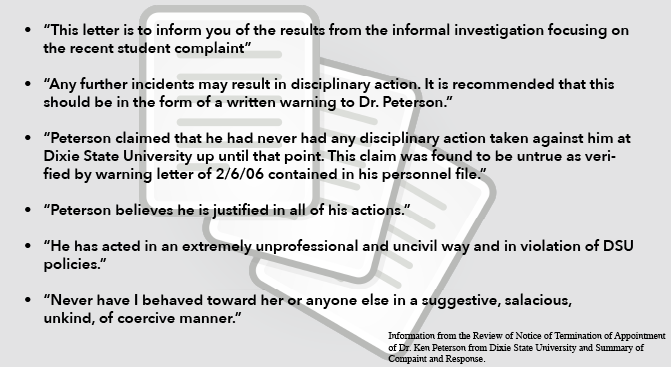 The complex web of information regarding former professor Ken Peterson’s dismissal and the Dixie State University administration continues to grow as past allegations against Peterson have recently come to light.

Dixie Sun News obtained via a GRAMA request a 13-year-old document that contained the results of an informal investigation of a sexual harassment complaint against Peterson that resulted in no more than a written warning.

“Based on the submitted information and the interviews conducted with both parties, it has been decided that in the best interest of all parties it would serve no useful purpose to conduct a formal investigation,” Dr. Donna Dillingham-Evens, vice president of academic services in 2005, wrote in the investigation conclusion document.

Peterson’s Last Chance Agreement received national attention from the Daily Wire, the College Fix, the American Association of University Professors, and the American Federation of Teachers. Peterson claimed the document attempted to take away his freedom of speech and was too ambiguous for him ever be able to abide by.

Hicks said academic freedom and first amendment law is complex, but that all of Peterson’s rights remained intact.

Faculty have taken matters in their own hands and drafted a Faculty Call to Action. This document calls for DSU Faculty Senate to support to the AAUP’s recommendations, withdraw the Last Chance Agreement and reinstate Peterson.

Peterson said the publication of the complaint is the last thing he’d ever want for the student involved. He said he wishes the administration would let the past be the past for the benefit of all parties.

“After this [complaint] was resolved, it was never spoken of again – by anyone – until now,” Peterson said. “It hasn’t been spoken of by anyone for 13 years. Why now? Why would [DSU] bring this up again?”

Alongside these past allegations, the Dixie Sun News obtained an independent review of Peterson’s policy infractions by Dr. Elizabeth Hitch, associate commissioner for academic and student affairs for Utah System of Higher Education.

In this document, Hitch’s third piece of evidence listed alluded to the student complaint previously mentioned; the policy infraction under review was Peterson’s statement on the Kate Dalley Show on March 12 that he had never been disciplined by DSU previous to his termination. According to both Hitch and Doajo, this is not true as a written warning is the first step in disciplinary action per Dixie State University Policy 372.

Peterson disagrees with these two, arguing that policy 372 does not constitute a written warning as a disciplinary action.

“What I said on the Kate Dalley Show is true because an investigation and a letter of warning do not constitute ‘disciplinary action’ according to DSU’S own policy number 372,” Peterson said.

“[The administration] can’t plaster these documents on the web,” Hicks said, “but we want students to know [Peterson’s termination] wasn’t just an arbitrary decision.”