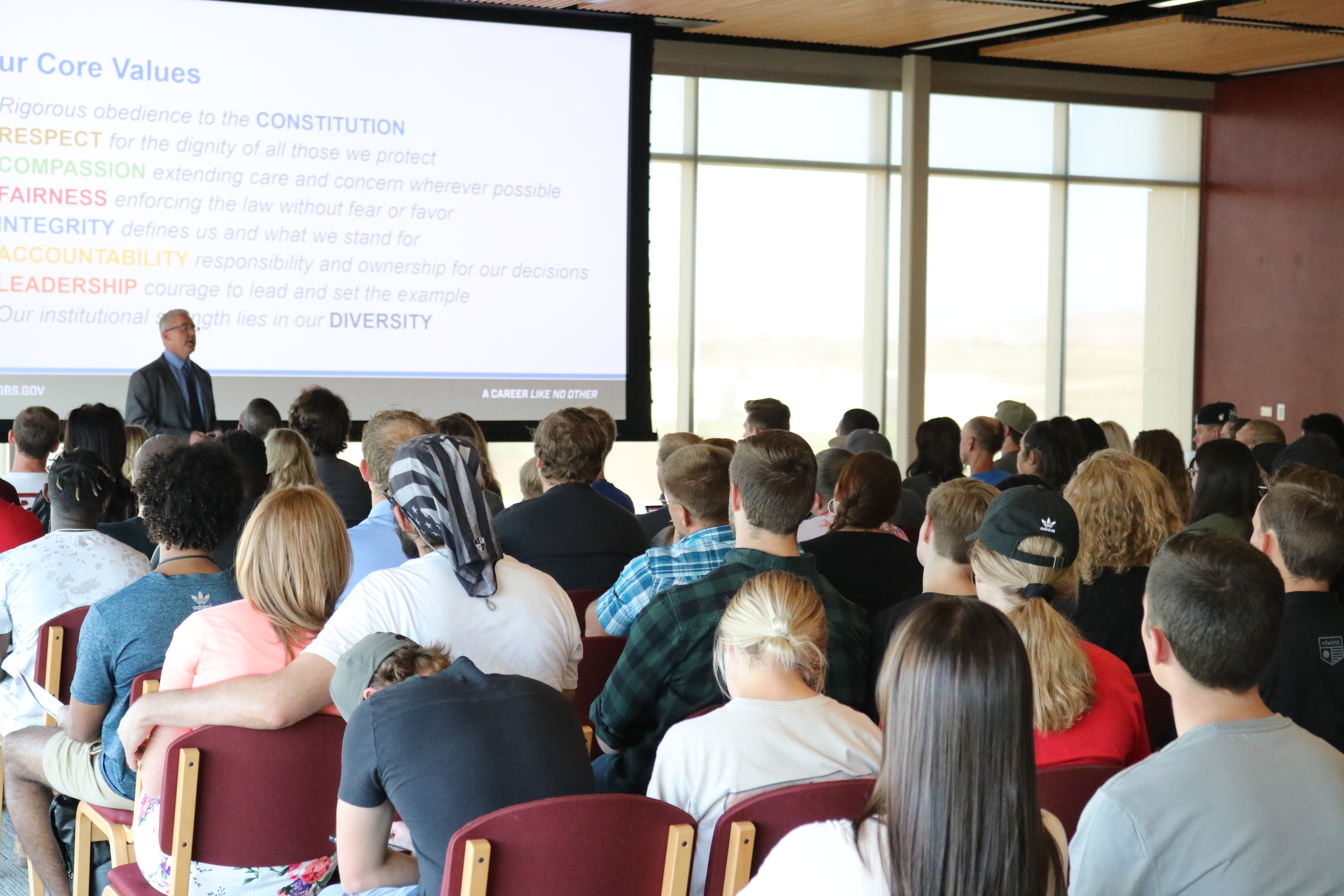 FBI Special Agent Benton Larsen talks about joining the FBI and what it takes at the Jeffrey R. Holland Centennial Commons building on Sept. 6. To get into the FBI it is a competitive journey for students, Benton said. Photo by Madison Anderson.

On Thursday, Dixie State University held a FBI session, which entertained and informed a full room of students and community members.

Special Agent Benton Larsen said the job is mainly paperwork which can last for days: most people do not realize that the job is not just about the action. Lish Harris, associate professor of criminal justice, said the FBI have large amounts of people wanting to join.

Harris said more and more people are interested now because of what people watch on TV and hear about with real cases. Larsen said the students must make themselves stand out from their peers because the FBI only chooses the best-qualified people.

Out of 60 interviews, the FBI can only hire ten applicants, Larsen said.

People wanting to get in the FBI have to have different skills sets than other people or else they won’t be chosen. Knowing a different language can help as well, especially if the language is not common, Larsen said.

Shane Blocker, assistant director of career services, said students must take their dream to have a career in the FBI seriously.

“The drawback in joining the FBI is that you have to commit to it,” Blocker said. “You just can’t say ‘oh, I’ll join the FBI’. It doesn’t work that way.”

“The criminal justice program has been on campus for seven years,” Harris said. “In the seven-year  time, it has become the largest major on campus.”

Harris said there are a lot more people who want to be in the FBI when they first come to DSU.

“If you ask our freshman what their long-term goals are there are a lot them have aspirations to join federal law services,” Harris said.

Anna Thomson, sophomore integrated studies in criminal justice and psychology major from Kaysville, said the session was helpful; she came to the event to get to know a field of work that she is interested in. She wasn’t deterred by what Larsen said about the job being competitive, she said.

“There are people who have spent hours and money to go to school and time getting training it takes to protect our county and that’s not easy,” Thomson said. “So, it shouldn’t be easy to get in either.”

Larsen said he  came to tell students about different jobs and programs within the FBI. Larsen said there is a ten-week internship with the FBI in the summer students can apply online. The internship is for US citizens only. When applying if you have any questions or concerns you can send them to recruiting@fbi.gov. Applications are due Sept. 14.