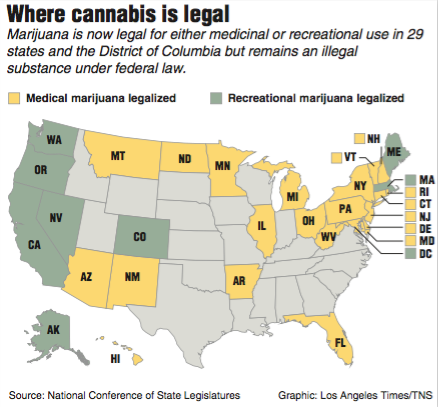 Map of marijuana laws as of July 2017, published in the Los Angeles Times. TNS.

With Proposition 2 on the ballot for the upcoming election, everyone has an opinion, especially the Church of Jesus Christ of Latter Day Saints.

Utah voters will be inputting their decisions for or against medical cannabis by voting yes or no on November 6.

The church recently sent an email to all members urging them to vote no to Proposition 2. Their main source of contention, in the initial email, was their concern for the youth of Utah. The church’s concern would be more genuine if not for the fact that the church is not a Utah-only institution, and was not concerned with America’s youth when 30 other states had marijuana pop up on their ballots. If the church was truly concerned about “the youth,” wouldn’t it have spoken up sooner?

I would also see this concern as more sincere if the church didn’t own billions of dollars worth of stock in pharmaceuticals known to be a synthetic cannabis. The church could lose hundreds of thousands of dollars if medical marijuana passes, and that’s why I don’t take their “fear for our youth” very seriously. My fear is that medical marijuana will not pass because an untaxed entity used their power over others to sway hundreds, if not thousands.

Over half of the United States has legalized either recreational or medical marijuana, with nine states allowing recreational use and 30 states limiting marijuana to medical-use only. Studies have proven time-and-time again that medical marijuana has beneficial properties for patients with cancer or people who suffer with seizures. Some studies warn about the adverse reactions of smoke inhalation, diminished IQ, and prolonged exposure to THC, which can cause psychosis. However, these issues required prolonged exposure to excessive amounts of marijuana. On the other hand those who say they will be voting “no” fear for their safety and security.

One of the biggest arguments against marijuana use is the fear of addiction or operating vehicles while intoxicated. While these are all valid arguments, using marijuana comes with almost the same risks as drinking alcohol, which is legal for adults 21 years old and older.

People can become addicted to anything — drugs or activities — but we don’t criminalize online shopping because a handful of people can’t control their shopping habits. Driving under the influence will still be illegal, and the laws will still apply to high drivers. Even driving with an excessive amount of NyQuil in your system can warrant a DUI.

When you go to vote, vote your heart. Vote for a better life for people addicted to opioids; vote for a less invasive treatment for cancer patients struggling through chemotherapy; vote for a more effective remedy for people with chronic pain or seizures.

When all is said and done, vote for what helps the most people. If you are not affected, do not vote no. It is not your right to take away someone else’s choice.