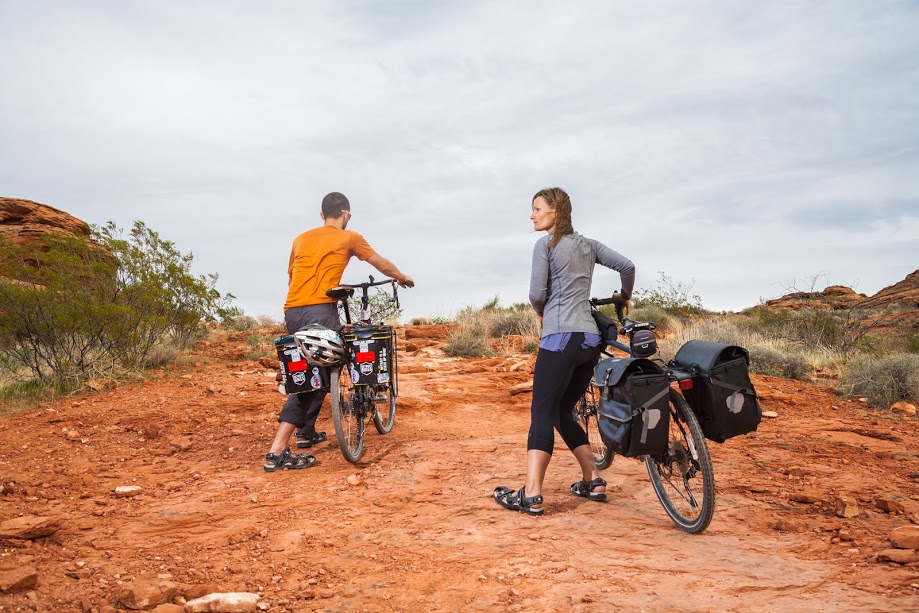 A Dixie State University professor has left her job to embark on a  two-year, 20,000 mile trip from Alaska to Argentina.

Sophie George, a former professor of psychology at DSU, and her husband, Chris Haag, are cycling across North and South America. Their objective is to “explore the Americas that [they] have only known in literature and film and help spread the good word of cycling as the ultimate mode of sustainable travel,” according to the couple’s blog. George said she doesn’t have everything figured out yet, but she has an idea of how she wants to fulfill their objective.

“I break [the objective] down into small chunks that seem manageable and focus on those individually,” George said.

George said when she looked at their map of where they are cycling to, she felt overwhelmed by how much they still have to travel. After a while she decided to take their cycling one day at a time.

“On a bike, you move slowly enough to really see, hear and smell the place you are in – and people have the opportunity to flag you down and ask you a question,” Haag said. “It’s one of the best ways to really experience a place, I think.”

Haag said he would like to tell students to “dream big” and that nothing they want to do is impossible.

“It’s more about the experiences on the way than the end destination,” George said.

George said her motivation is the thought of crossing into Mexico for the first time; Haag is motivated by becoming stronger physically, emotionally and psychologically, he said. However, both occasionally question if the expedition is worth it all.

“We’ve seen a really good part of human nature in people’s willingness to help others,” Haag said. “If we sat around waiting for the perfect time we would never leave.”

The couple have sponsors who help them fund their cycling trip. A few sponsors include waterproof fear from AQUAQUEST, the Michigan-based apparel company named Mich Mash, and Bicycle Collective, a bike shop based in St. George. These sponsors help the couple by providing everything from clothes to bikes. The duo appreciate any help people are willing to give them along the way, they said.

Jenae Holt, a senior psychology major from Spanish Fork, is George’s former student and described her as “knowledgeable and passionate” and said George would “go out of [her] way for students.”

“I would love to have her again as a teacher,” Holt said.

Holt said she remembers George as a mentor due to the fact that George follows her dreams.

You can follow the duo on their blog, which features a map that tracks their daily progress and information for being a sponsor.