College students need to get more involved in politics 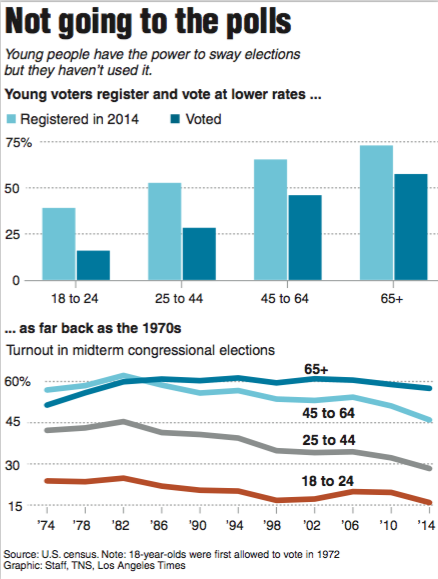 Over the last couple of years, the political world has turned into a battleground unlike any seen before.

College students, specifically those aged 18-22, are unique soldiers on this field in that they are the youngest, most influential and oftentimes most apathetic. However, the issues being debated in the world around them will influence their lives longer than any other eligible voter.

For a long time, it has been known that young, eligible voters consistently do not vote. In fact, the the Census Bureau reported, “In every presidential election since 1964, young voters between the ages of 18 through 24 have consistently voted at lower rates than all other age groups.”

This was partially attributed to the large population of elders in the country, born from the commonly referred to “baby boom.” However, last year was the first time millennials had a greater potential force than the older generation, according to the Pew Research Center.

That is why this year is the perfect time to get involved in politics. Not only is the potential there to make a real, direct difference, but midterms arecoming up on Nov. 6. The opportunity will be there to vote for your congressional representative and senator.

The Institute of Politics has been getting involved in the effort of getting college students interested in politics, though it is a fairly new institution and underdeveloped. This is only its third year on campus.

“Any involvement is good involvement,” Weston Zimmerman, an accounting major from DSU and president of the Institute of Politics, said. “Whatever you are doing politically is a positive thing… It’s important. It touches our lives personally and it touches our lives professionally and so as long as we stay aware of that and keep aware of it then we can make those changes that we want to see.”

Being involved in politics can be extremely discouraging, however, and it oftentimes doesn’t feel like any real difference is being made; a lot of effort can be put into a political campaign just to have it lose, the bill you’ve been following through Congress gets vetoed by the President, or there just seems like too many problems for one person to fix.

However, for me, there is no other option than to put the entirety of your heart into the issues you care about. The United States elections were created for the people – they were created so the public could have a voice about things that affected them.

If you feel as if you’re vote doesn’t make a difference, discover why and then fight until it feels like it does.

As the great philosopher Charles de Montesquieu put it, “The tyranny of a prince in an oligarchy is not so dangerous to the public welfare as the apathy of a citizen in a democracy.”

Apathy is a disease that has spread most disastrously to college students.

I urge you to find the cure; figure out what you can get involved in – no matter what it is. Take your current interests and build on them, whether it be voting rights, education, climate change, or anything else, you can make a difference.