New building master plan for 15,000 students at DSU in works

A master plan to increase enrollment to 15,000 students at Dixie State University will come with several large-scale construction projects in the coming years.

The master plan will show building plans for what the DSU campus should look like if 15,000 students were enrolled. Construction projects in the plan include additional housing buildings, more academic buildings, expanded intramural and recreation space, and a parking garage. The plan will be presented to DSU administrators and members of the DSU Student Association Sept. 14 by architects Sasaki Associates Inc, who also designed the Holland Centennial Commons.

A $50 million Human Performance Building is also in the works, which will include an Olympic-size pool, three basketball gyms, an indoor soccer field, fitness center, indoor running track, locker rooms and a climbing wall. The building will also hold several classrooms and a student wellness clinic. 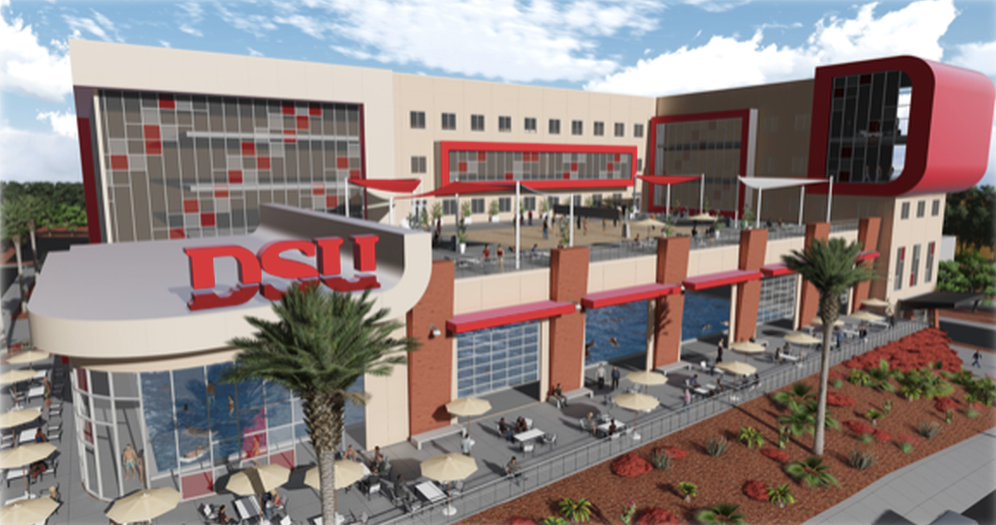 Artist renderings show what the $50 million Human Performance Building may look like once completed. Jonathan Gibb, director of facilities planning, said the artist rendering was “a little bit too flashy” for how it will actually turn out when plans are finalized.

Jonathan Gibb, director of facilities planning, said the goal is to start construction for the Human Performance Building next summer.

DSU previously requested $40 million to help fund the Human Performance Center, but this request was declined by lawmakers during the most recent legislative session in February. Gibb said he now feels confident the legislature will approve the request this time because the amount they are asking for is lower and the amount raised by DSU and the students is higher.

“When we go to the legislature and make our request, our half of the [Human Performance Building] will already be paid for,” Gibb said. “We’re prepared.”

Gibb said DSU needs the Human Performance Building because of the lack of recreational facilities at DSU and in the community.

Christian Hildebrant, director of campus recreation, said the Human Performance Building will “greatly enhance” DSU because the current recreation facilities are too small and insufficient.

“One court in the [Student Activities Center] is not enough for all our intramurals and sports that use it,” Hildebrant said. “In order to meet the need of all our students, we’ve needed to get creative. The [Human Performance Building] will allow us to take the recreation program to the next level.”

“Our lab space is currently at the SAC, which is not the most ideal place for these types of classes,” Wintch said. “The new [Human Performance Building] will be a state-of-the-art facility that will help us and the university as a whole grow.”

Gibb said the artist renderings for the Human Performance Center made last year were “a little bit too flashy” for how it will actually turn out when plans are finalized.

While the Human Performance Building may attract a lot of new students to DSU, Gibb said the purpose of the new 15,000-student master plan is to accommodate the growing enrollment with more housing options, academic space and parking.

Gibb said the physical teaching space will double under the new plan. This will be achieved through expanding existing buildings and replacing single-story buildings with new ones that will be three, four or five stories high, Gibb said.

However, Gibb said there are no plans to expand campus limits or encroach green space.

The Gardner Student Center will be expanded to the south toward the Jeffrey R. Holland Centennial Commons in the near future depending on funding, Gibb said. This expansion will accommodate a larger dining area and bookstore. Gibb said there are plans to also expand parking areas soon, which will include a parking garage in the future.

“We’ve been due for new student housing for quite a while,” Gibb said.

Gibb said DSU also has funding to replace the track at Legend Solar Stadium, which will happen in the next twelve months. The timeline for when the bleachers on the east side of the stadium and the grandstand on the west side will be renovated “is kind of a question mark right now based on how many donations we’re getting for it,” Gibb said.

“I feel like DSU is finally ready to expand and grow — whatever that’s going to look like,” Hildebrant said. “It’s exciting to see what’s coming.” 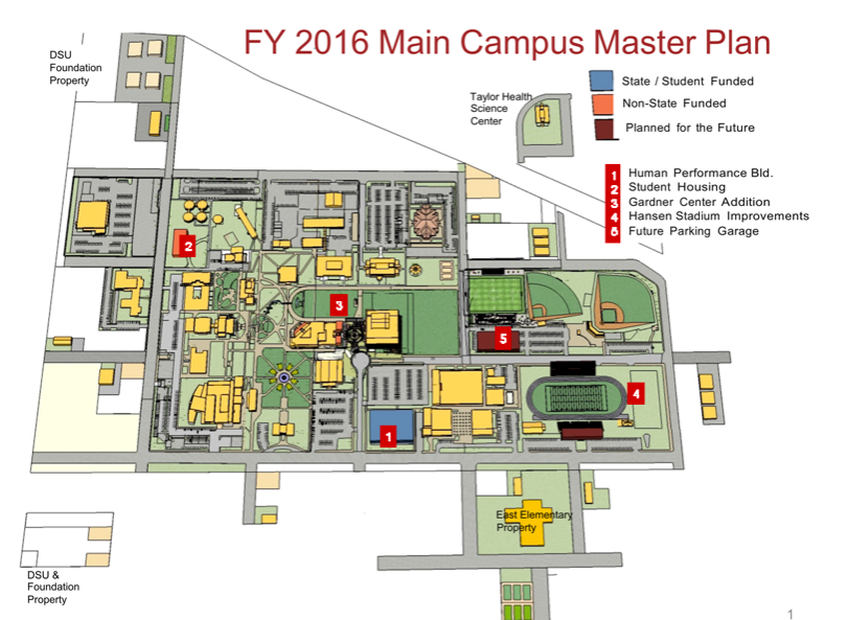