I found a wild Charmander by the clocktower, a Raticate behind the McDonald Building, and a Growlithe in the Gardner Student Center.

No, these aren’t terms from your chemistry class; they’re virtual creatures called Pokémon in the augmented reality mobile game, Pokémon Go. But if you’re one of the 30 million active Pokémon Go players worldwide, there’s a good chance you already knew that.

Pokémon Go players use their cell phone’s GPS to locate, catch, battle and train the Pokémon, which appear on the screen on a map as if they were in the same real-world location as the player.

I finally gave into the pressure and downloaded the app this week to see what all the hype was about. I was never into Pokémon, and I never even played video games as a child. But a few minutes into playing Pokémon Go, I could see the appeal.

I started walking around the Dixie State University campus, throwing red and white balls at the critters that appeared on my phone, which looked to me like purple mice, yellow pigeons and orange hermit crabs with mushrooms growing out of their backs. It was addicting looking for the creatures and adding them to my collection. 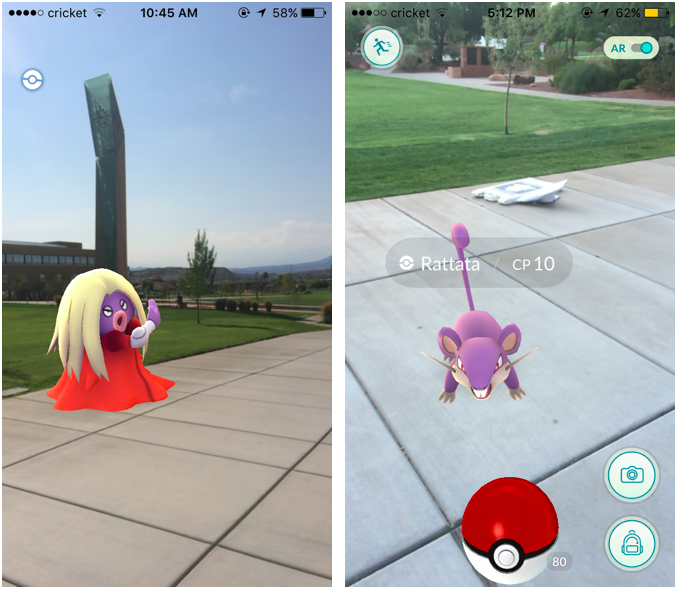 Screenshots show Pokémon being discovered on the Dixie State University campus in the augmented reality game, Pokémon Go. DSU is a great place to play Pokémon Go because of all the Poké stops and Poké gyms, says C.P. Paredez, a junior communication major from Las Vegas.

But for many Pokémon Go players, the game’s appeal goes beyond just catching Pokémon. It has created a new community and opportunities to meet new friends at DSU, said Justin Lockhart, a freshman media studies major from Hurricane.

“I’ve met so many new friends playing Pokémon Go, you have no idea,” Lockhart said. “It helps me get out of the house and exercise a bit more too.”

Lockhart said he meets friends while playing Pokémon Go by meeting them around popular Pokémon spots and through “lures,” which attract Pokémon to a certain point on the map to make them easier to find.

C.P. Paredez, a junior communication major from Las Vegas, said the DSU campus is a perfect place to play Pokémon Go because of all the Poké stops and Poké gyms. Poké stops are places on the map where players can obtain items like Poké balls, which are used to catch the Pokémon. And Poké gyms are places where players battle the Pokémon they’ve caught. There are four Poké gyms on campus — the mosaic by the fountain, the Institute of Religion, the clocktower and Legend Solar Stadium.

Paredez, who took a summer class at DSU, said many people were playing Pokémon Go late at night on campus.

With all the people playing the game on campus into the late hours of the night, Don Reid, DSU’s director of campus security and police, said it gives campus police officers a “slight concern.”

“[Pokémon Go] compounds the amount of people on campus, so in theory, someone who wanted to do harm could disappear into the crowd,” Reid said. “I say that tongue in cheek, though, because there aren’t big crowds coming to play Pokémon on campus. Most people playing it just come and go.”

“It’s more of a distraction than an issue for us,” Reid said.

In the few days I played Pokémon Go, it became somewhat of a distraction for me as well, so I deleted Pokémon Go from my phone. Given the choice to either give up good grades, sleep or catching Pikachu, Pikachu would take the fall. Only time will tell if Pokémon Go is just another fad or if it continues to be the “cultural phenomenon” news outlets around the country made it out to be when it appeared in July.

As a dedicated Pokémon Go player from day one, Lockhart said he plans to keep playing it for years to come.

“I play [Pokémon Go] to catch them all,” Lockhart said, quoting the Pokémon anime’s theme song. “I just want to be the very best like no one ever was.”