Dixie State University will celebrate 102 years of D-Week with the mascot reveal taking the spotlight.

The theme of D-Week 2016 is “The Reveal,” which kicked off D-Week Monday in front of the Jeffrey R. Holland Centennial and the Gardner Student Center.

“This D-Week will be extra special because we are introducing the new identity of the university,” said Kendall Pitts, a sophomore communication major from Las Vegas. “Other than this, there is not anything new because D-Week is based off of lasting traditions that are special to alumni and the students that continue to make them.”

D-Week is a long-time tradition at DSU that began in 1915 when students constructed and whitewashed the “D” on the hill.

“Since then, D-Week has included the D-Queen Pageant, the annual whitewashing of the ‘D,’ the Great Race, the Carnival, and much more,” said Student Body President Matt Devore, a junior integrated studies major from Mesquite, Nevada.

The DSU Student Association has plans to pump up the students for the university’s esprit de corps celebration.

“The plans DSUSA has to get people involved is to decorate the entire campus to let each and every student know that it is D-Week,” Pitts said.

Pitts said everyone at DSUSA is excited about D-Week’s theme.

“[Trailblazers] satisfy all the criteria the identity committee established and will aptly represent DSU for a long time to come,” President Biff Williams said in a press release.

DSU’s new athletic identity was unveiled Monday in the Cox Performing Arts Center. To celebrate the reveal and kick off 102 years of tradition, everyone present received a free T-shirt with the new logo, sticker, children’s book and dinner.

“As the student body president, I decided to leave my personal interest out of the voting for the new mascot,” Devore said. “I took the data from the survey and from student focus groups and pushed for the mascot favored by the students.”

Following the identity reveal, the D-Queen pageant will take place at 7:30 p.m. in the Cox auditorium Tuesday. Contestants will be judged on their service and loyalty to DSU, as well as academic achievements and community involvement. Tickets for the D-Queen pageant are $5 at the Cox ticket office.

D-Week will celebrate Wednes-D with a show from rePercussion, a group that uses buckets, barrels, pots and pans to create high-energy musical entertainment. The troupe will perform at 7:30 p.m. Wednesday in the Gardner Student Center ballroom.

Fourth in line for the celebratory week is the chance to help DSU break the world record for sending the most people down a slip-n-slide in one hour. Doors open at 5:15 p.m. Thursday, and the event starts at 6 p.m. Free registration is required and can be done ahead of time at dixie.edu/dweek or at the door.

The great race will be Friday at 5 p.m. in the Hansen Stadium. Students will trudge through the infamous mud pit among other events as they relay through the competition throughout campus.

More than just a bicycle race, The Great Race, started in 1964, has become a DSU tradition. Transformed into a relay in the 1970s, the race was brought back to life in 2000. The Great Race includes some of the original events as riders cruise around The Black Hill. Registration is open to members of DSU and St. George community with registration packets available at the Wade Alumni House.

At the conclusion of The Great Race, the D-Week Carnival, complete with food, fun and inflatable toys, will be held from 6:30 to 8:30 p.m. on the Lower Hansen Field, south of the stadium.

For the 102nd year, DSU students and community members will head up to the black hill and whitewash the “D” at 7 a.m. Saturday.

“I love that D-Week is all about the lasting traditions that students over the years have made,” Pitts said. “It is a time for students and alumni to get together and celebrate the Dixie spirit. It is not something you describe but something you feel.” 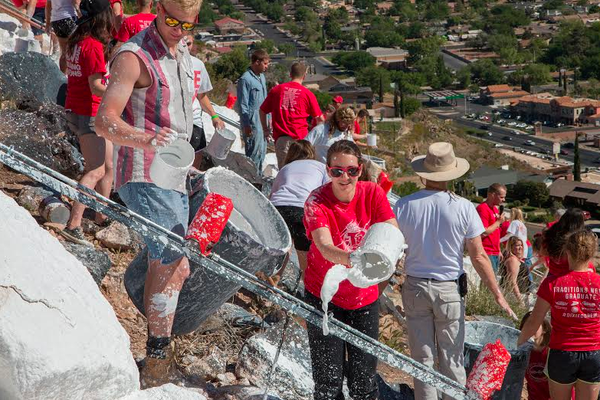 Students whitewash the “D” on the hill during D-Week 2015. The “D” will receive its annual coat of lime on Saturday. Photo courtesy of Dixie State University.